I use a blue Cisco switch, not really for any sound improvement, its because i need a few extra ports over what my router has.
Well the last few days things have been acting up with my interest and today while i was at work, it has failed, its not letting any info through it at all, the green lights above the ports are not on.
My wireless router is still working, the stuff plugged into that is also working, so its 100% the cisco switch.

Having tried a melco S100 switch already and not liking what it did, do i just get a new white cisco switch, or do i try say a EtherRegen and see if that makes a difference?
I know its very hard to say and the only way is to try, but is the ER ok to use next to the router away from my system?
Is it ok to have my TV x 2 also plugged into it, as i do with the Cisco?
The running hot is a concern on the ER, as it would live in the cupboard under the stairs, big cupboard, that has the meters in it, plus it would be on a shelf, but i dont want a fire risk etc.
Not going to buy new if i get one, as i have seen a few for sale at a nice discount on new price, but as it looks like i need to invest in a new switch of some sort, it has opened up the options.
Dont really need a debate on its sound quality, more the questions i have asked above.
Cheers

…I picked up a 8switch by English Electric awhile ago and enjoy the uplift that provided.

I recently ordered a used WS-C2960C-8PC-L Cisco Catalyst 2960C to go between the EE and the router. The Cisco will replace a Cisco SG110D 110 Series 5-Port Unmanaged Network Switch.

Agree with Michael…the ER is a great buy, not tried the EE switch though.

Guys what about my few concerns
Heat and placement away from system, etc.
As said sound not a question, as if i get one, then i will see if it makes a difference, but really would like some options on my concerns first

It does run pretty warm ( the ER switch) i would try and return it , or just try the EE…many seem to like it.

Sorry to hear your device has failed, that is unusual, but obviously happens from time to time.
Clearly you can replace, and used ones from the usual place seem to be very cheap at the moment…
You can also use a switch like the ER, to put on the segment between your streamer and main home switch/router. As an actual network switch it’s very limited and basic, so I wouldn’t use for general home switching use although there is nothing stopping you doing this… but if you use it as a segment repeater where it acts as a ‘buffer’ between your streamer and main home network switch(s)/router switchport and it might be of some sonic benefit.
Although I have to say I use an ER this way, but in my current setup of using decoupled DAC/streamer I hear no difference from it. Yes the ER does run very warm

Obviously the Cisco catalysts vary in ‘sound’ as well, where the PD devices remotely PoE powered tend to ‘sound’ the best as well… but again only really noticeable where your streamer and DAC are not decoupled. 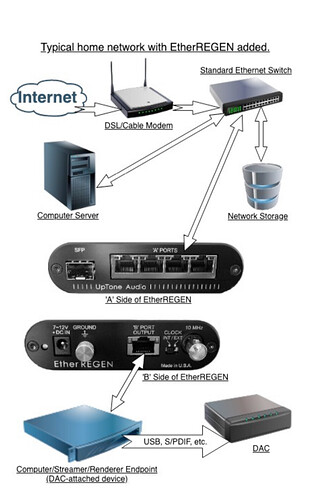 I’ve had great success with the PD models with external SMPS.
The WS-C2960CPD-8PT-L or WS-C2960CPD-8TT-L can be found used for reasonable prices. I’m in the states and paid ~$70USD for each of mine, one was unused and one was hardly used. Some of the new prices seem outrageous to me so you may have to look around some. The 8PT can send POE and 8TT receives POE should you decide to go that route but both can be used standalone and have appreciable affects on the sound floor in my system. A noticeable improvement from the blue ciscos and more so should you go POE. Also, perhaps the EE8 would be preferable to the ER in your system? If you decide to go that route.

or do i try say a EtherRegen and see if that makes a difference?

Bear in mind that in terms of the effect, if any, on sound quality is likely to differ between network setups, the electrical environment the network is in, and the specific renderer and in particular DAC used, as well as any other system factors, and personal sound preference. In other words any benefit or disbenefit and degree thereof that any individual reports may bear little or no relationship to how the same switch may influence sound in your system, or even whether it has any effect audible to you, possibly unless the relevant parts of their system and setup are the same as yours. So the answer if you are tempted, is yes, try and see if it makes a difference (and whether you like any difference it makes).

The running hot is a concern on the ER, as it would live in the cupboard under the stairs, big cupboard, that has the meters in it, plus it would be on a shelf

It runs very warm, but mine has run fine for two years and seems OK.

I found keep space around it and also the heat depends to an extent on the number of outputs used - mine ran a bit cooler with no Optical Module and only used to clean the signal, so two ports used - one input and one output so to speak in my case.

Just place it on a shelf with space around it for air to circulate - off the floor helps - and it should work fine.
I did lift mine up a bit more on some custom hard plastic ‘feet’ to create more space around it and I think that helped a bit more.

Essentially the ER probably needs to be in a larger box to dissipate the heat better, but then probably double the cost at least…I’m happy with mine.

Excuse my ignorance but why would you need a switch between modem and ER? Could you not go from modem straight to ER and plug NAS into that?

You don’t have to excuse asking questions…

. You might be getting confused with the terms and their meanings, even the ER manual has got confused so you are not alone !.. a modem is a device that modulates and demodulates electrical signals over a bearer to provide a digital presentation. It typically, but not always, is built into a router for xDSL/Cable based broadband. A home network router typically has 4 switch ports. You can use these switch ports as you see fit, however many/some have larger home networks which require more switch ports so would typically connect the broadband router say into the uplink ports or regular ports of some sort of distribution switch… one can then connect devices such as streamers into this distribution switch or other switches such as the ER as appropriate, depending on home network topology and preference. Indeed if you read the ER manual they show this as a typical setup too, and indeed how I use my ER.

But if you had a tiny home network you which required very few switch ports you could connect your ER into one of the router switchports.
The ER itself is a very basic and limited switch, so probably want to limit what else you plug into it (on the ‘A’ side) for optimum SQ and home network performance. I advise using the ER as a segment repeater for your streamer… indeed as shown in their manual setup.

Guys what about my few concerns
Heat and placement away from system, etc.

The ER runs hot but well within its specs. Mine aren’t in a cupboard but are only warm to the touch, definitely warmer however than my Roon Nucleus. I can’t imagine it would be a fire risk in a cupboard, but I’d think twice about putting it in with a gas meter. When you write “meters” does that include gas? Frankly I would rather keep gas and electric separate.

As for being far away, I found mine was slightly happier away from my brawn rack. There’s a 6m cable if I remember correctly (could be 5) between the ERs and the ND555.

Thanks Simon, makes sense now. We just had some work done on the house and I asked them to install a single run of ethernet from the fibre router/modem to the music room. I don’t have a streaming set up yet but assumed that would be the best option - then from the wall either direct to a streamer or via ER/EE8 etc.

Hi… I would try different options. Interestingly if the Ethernet wire is long, say 30 metres plus, then you might find plugging directly into your streamer the most beneficial SQ wise.
Long Ethernet runs can be advantageous, especially if Cat5e, as the signal attenuation is greater and so less potential noise coupled power into the streamer … and you might find the best is with your ER at the end away from your streamer … give it a go, you might be pleasantly surprised

Its probably no more than half that distance, around 12-15m of Cat6e. Maybe another 4m from the wall to where the streamer would be sited. I guess I will have to experiment when I get round to adding a streamer.

Well i have jumped in and have an ER on its way.
Plus just to add to my misery, my mate has just dropped me off a cisco switch for free, well atleast i have all my ethernet working again.

This now also means i dont necessarily need the ER, but as its on its way, i guess i might as well see what it does, but i will try it system end now, so it will only have a short cable from port A into the melco, just need to find somewhere to sit it

just need to find somewhere to sit it

Will see when it hopefully turns up tomorrow, but on the rack or next to it i think.

Plus it gets better, my old Cisco that went wrong, is once again working again, all be it in my mates house, apparently it had somehow programmed its self to turn off all ports.
It doesn’t matter really, but it is sod lol, will probably have it back and swap them back over, as my one is apparently better than this one.

Sometimes i have to wonder lol