Clocks go back an hour this weekend in the UK. Why?

Seems completely unnecessary to me. Are there really any good arguments for keeping this change?

Keeping the change? Nope, not in my opinion. I think it was started by some wig mp from the start of the 20th century that wanted more daylight early am to go horse riding! 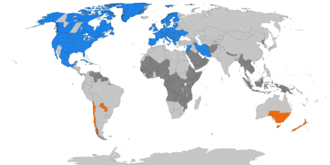 Daylight saving time (DST), also known as daylight savings time or daylight time (United States, Canada and Australia), and summer time (United Kingdom, European Union, and some others), is the practice of advancing clocks (typically by one hour) during warmer months so that darkness falls at a later clock time. The typical implementation of DST is to set clocks forward by one hour in the spring ("spring forward") and set clocks back by one hour in autumn ("fall back") to return to standard tim...

The historical bit about the Romans is interesting.

Short answer, so that the kids don’t have to go to school while it’s dark,or something like that.

I would have thought that the better thing to do is keep to winter time. In the summer there are sufficient daylight hours to make no real difference. A while ago we temporarily kept summer time - but that solved nothing, because it retained whatever problems were being solved with the introduction of winter time.

The funny thing though, is that it isn’t actually a real thing.

IIRC, it’s to help farmers and children walking to school (not much help walking back though, especially in more northerly parts of the British Isles). I know well that Farmers are up all hours anyway, light or not, and as far as I can see around here children now get their own personal panzer tank, I mean SUV, to ferry them to and from school (just be careful though as it appears these vehicles do not have to adhere to normal rules of the road and are also allowed to park pretty much anywhere, regardless of hinderance or hazard).

The motion studies prove that children go straight to school in the morning. But in the evening they meander whilst hanging with their mates. This may have been the justification once, but the data says it’s flawed.

More realistically this is about economic productivity, getting people to work rather than staying in bed whilst it’s dark.

I’d be in favour of sticking to BST, but that might require a Referendum. Let’s not go there.

True, I believe it was introduced in the UK during war time?

Removing it has been discussed in for too many years.
It was introduced in WW1 for energy saving rather than daylight, but hey-ho, no good reason for it these days.
All the old reasons kids going to school in the dark etc are just ‘excuses’ for lack of effort from the various countries politicians. Who says school is compelled to start at x-time, flexi-time comes to mind, and kids in northern regions go both to & from school in the dark.
No excuses …. fingers out is required

There is no more daylight. The actual hours of daylight on any given date is exactly the same no matter what time you set your clocks.

Really? Thanks for this, I hadn’t realised…

Then come Christmas and it’s bleeding dark at 3.15.

There is no more daylight. The actual hours of daylight on any given date is exactly the same no matter what time you set your clocks.

It’s amazing how many people don’t understand this. You can always get up and go to bed whenever you like really. Children do.

The Earth is going to rotate around the Sun once a year and spin once every 24 hours on a rotating access, no matter what anyone does with a clock.

Removing it has been discussed in for too many years.
It was introduced in WW1 for energy saving rather than daylight, but hey-ho, no good reason for it these days.

Thats because Santa needs to visit so many people in the dark.

On a more serious note, in many cultures a feast exists around Xmas time to celebrate the return of the sun.

Yes. So school children don’t need go to school in the dark and it allows farmers to have more daylight in business hours for market.

If being pedantic, this is a return to GMT which is our “normal” time. In the summer we move to BST for the reasons outlined above re farming etc. (Albeit superseded these days by other considerations such as road safety and tourism. ) We did experiment many years ago with “British Standard Time” to replace British Summer Time. That meant we no longer reverted to GMT. It wasn’t a success as I recall.
I think it is a practice replicated around the world in various countries including most of Europe.
More importantly, does a Naim power supply work better on BST or GMT ? Discuss.

I never understood why we went to summer time. The problem, surely (if there is one) is that there are fewer daylight hours in the winter than in summer. So if we had kept winter time, then that should have been better.