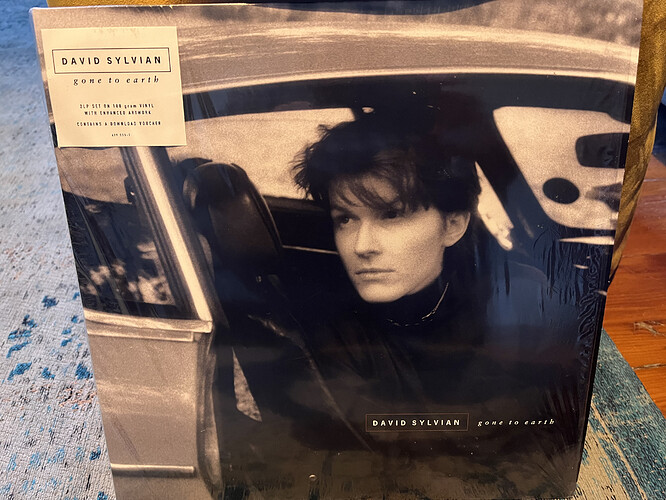 I am re-visiting my early vinyl and have been surprised at how much I am enjoying all things DS.

Once described as ‘the most beautiful man in the world’* David Sylvian’s purple patch spanned Gentlemen Take Polaroids, Tin Drum, Brilliant Trees, Gone to Earth and Secrets of the Beehive and also takes in his glorious collaboration with Ryuichi Sakamoto on Forbidden Colours.

Anyone else on here a fan or wish to point me in the direction of other work he’s done that is worth checking out?

I purchased the re-issue of Gone to Earth because I lent my original to someone and never saw it again. I wasn’t too impressed by the sound quality of the 2016 re-release (pictured) and wondered if anyone had any experiences of his recently re-issued albums? I’m trying to replace my copy of Tin Drum, which is so scratched its unlistenable. Do I need to track down an original pressing or is the re-issue worth getting?

I was a Japan fan for donkeys’ years, not so much of DS’s solo efforts though I do like Brilliant Trees. Whilst his post-Japan work is to my ear quite unique, I do find some of the Japan material to be a little derivative, I’m thinking Adolescent Sex era (New York Dolls) and Quiet Life (Roxy Music). It’s not a complaint or slander, just an observation but I enjoy those albums nonetheless.
In terms of replacing Tin Drum, I would heartily recommend the Abbey Road Remaster series, they’re fantastic quality - the only downside is they’re 45RPM so the albums are split across 2 records.

Dead Bees on a Cake is rather good

Thanks @Jonners - are my best options eBay and Discogs or is there somewhere else you could recommend?

…“are my best options eBay and Discogs or is there somewhere else you could recommend”?

Not really and I’ve found eBay to be cheaper than Discogs, usually with free delivery too. I suppose there are record shops selling new copies you could go to (I frequent one in Witney, Oxfordshire for example), which may have secondhand copies as well, though I think unlikely for the AR Remasters…

I recently stumbled on two lovely albums by Sylvian and Jansen, under the name Nine Horses. They’re called Snow Borne Sorrow and Money For All. Added bonuses, Sylvian sings, which he doesn’t on much of his later solo work. Available on Tidal.

@bhoyo - Terrific. You have to love this place. Thanks, I will check this out tonight.
I’m enjoying the Music Room part of the forum very much.

I can recommend the latest re-release of Sleepwalkers, it is audiophile quality to my ears and is getting many repeat plays!!!

Both Blemish and Manafon are going to be re-released in September, the originals sell for £££’s on discogs.

Agree that both Tin Drum and Gentleman Take Polaroids on 45RPM sound really good. Quiet Life re-release was a let down and sounds pretty flat, so expect the original to sound better.

I bought the rest of DS re-releases except Gone to Earth, as I have the original but the other early albums all sound good to my ears.

This is a super live album. I was very lucky to be there on the night. 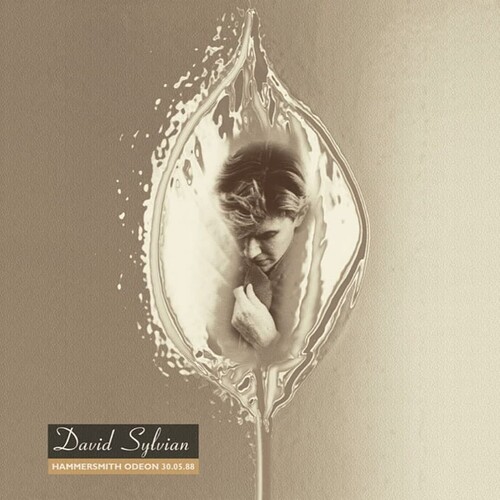 That’s not on Tidal, I’m sorry to say. The cover looks (how can I say this politely) as if he’s being born again.

I think that’s a bootleg.

Sadly not - you can listen to it here

Steve Jansen is actually his brother

I love Secrets of the Beehive. Shame about the poor overblown mix. At least on CD and Qobuz.

I was there too. Fantastic gig.

Always loved Japan and most of his projects.

This collaboration with Holger Czukay I liked 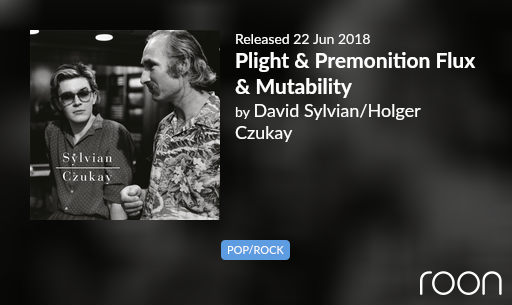 I also didn’t mind this one with Fripp 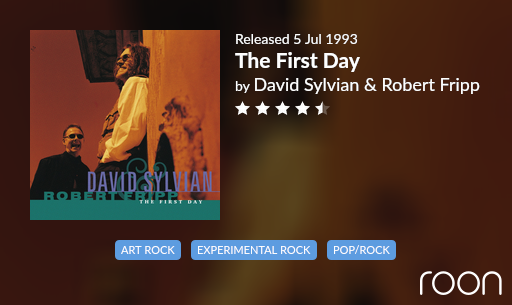 This compilation album covering his solo career up to 2012 is also a good listen. 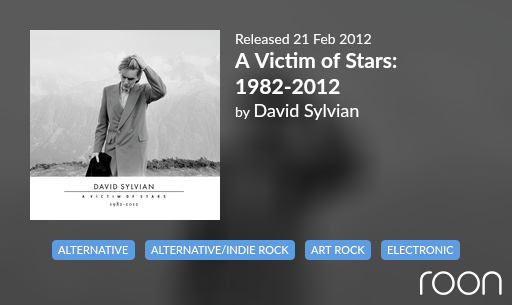 Hmm, could be a leaf I suppose. A bit subtler than Björk a few years ago.

I loved Japan and enjoyed his solo efforts, but I think his best was his collaboration with Riuichi Sakamoto on Forbidden Colours.

@CrystalGipsy and @jmtennapel
All good choices. Bought the excellent ‘A Victim of Stars’ new for £6 on CD. It would make for a brilliant vinyl compilation. Will check out both Robert Fripp collabs.

Thanks @AndyJ - I am hunting down the Tin Drum 45rpm re-issue. I have Reissues of QL and GTP and agree QL is nothing special sound wise. I had Hansa first pressings of both of these back in the day.