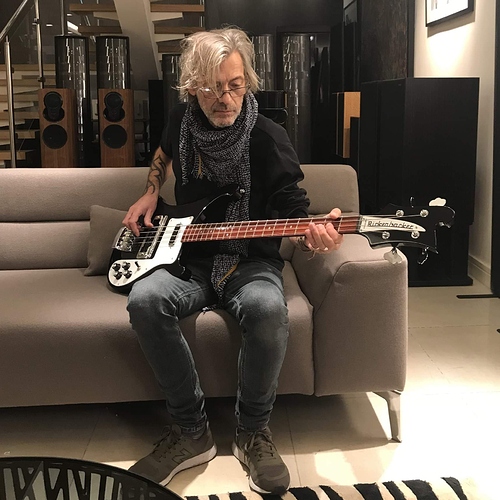 Below written by KJ West One.

It is with great sadness that we must announce the untimely death of our dear friend and colleague Derek Jenkins,who passed away Friday morning following a heart attack.
Our deep condolences go out to his family, friends and girlfriend Lucile at this difficult time.

Derek had been a key fixture in the British hi-fi industry for decades, renowned for his knowledge of turntables.
His experience was sought out by customers from all over the world.
He was incredibly easy going, always happy to help and got on great with almost everyone.

His love of vinyl began back when he was at school and bought his first record player, a Thorens TD160.
It was with this very player that he would go on to experiment and learn, before he joined Grahams Hi-Fi some years later and began learning professionally.

Here Derek began to set up Linn LP12 players (something he became regarded as one of the very best in the country at).

Derek then moved to Sound Organisation where he developed his skills even more.
Learning to setup up and refurbish Roksan Xerxes and SME players with great success.
Gradually Derek gained recognition as a knowledge authority on turntables, cartridges, arms and phono stages with a formidable knowledge of music.

In recent years Derek had built LP12s and other top players at KJ, Infidelity, Soundstage, TomTom and more.

To say Derek was good at setting up turntables is a huge understatement, he knew the players inside out.
In his spare time Derek helped design and manufacture LP12 parts for Tangerine Audio,…which has become increasingly successful and popular among audiophiles in the last few years.

Derek had always been a true music fan and a keen musician.
In the mid 1980’s Derek played bass guitar in a band for many years until they disbanded after ‘the singer went mad’.

He was an avid collector of guitars too with a collection that included a Rickenbacker 4003S, a Gibson Les Paul TV Jr and a Nash Telecaster.
One of his most impressive tricks was that he could often tell you which guitar is being played from the sound alone.

Derek was a fountain of knowledge when it came to music,and was often seen coming into the shop with a few new LPs under his arm.
He was lucky enough to see hundreds of the great musicians live in their prime, something he was very proud of.

He will be sorely missed by all at KJ West One, and although he is gone, the legend of Derek Jenkins will forever live.

I had the pleasure of meeting Derek who set up my LP12 back when I first owned it. He also advised me on several occasions on improvements and upgrade purchases.
Derek was a lovely guy with a real passion for music, music reproduction and the LP12 and was always very professional.
He will be sadly missed, RIP

I have Derek and his colleagues to thank for raising the performance of my LP12 to a whole new level when he was with Roger and colleagues at Tiger Paw. He was a real talent and will be missed for sure.
May he listen and tweak in peace.

I bought a lot of gear from Derek when he was at the Sound Org in London, I still have the 135s and the TMS he sold me. As well as being extremely knowledgeable about hifi, he really loved music, and he was a really trustworthy and nice bloke. I had some very enjoyable beers with him in the pub next to the shop, conversation could range wildly. RIP Del, I’ll raise a glass to you tonight,

I think I first became friends with Derek at the SO, with a smile as a wide as could be, a huge heart and a true audio warrior for decades, never losing his passion and as helpful as he could be to anyone he met. One of the best in the game setting up systems and his recent work his Lp12 upgrades has been truly special. A sad day, too young to go.A top man.

I only had mail contact with Derek,it was about the known LP12-problem,.that he also was very concerned about.

He was incredibly knowledgeable and passionate in his musical interest.
I have also received his advice many times.
A great loss for loved ones,…But also for us music lovers who sought his knowledge.

Thank you Peder for posting that lovely obituary from KJ West One.

Derek was truly one of the nicest people you could meet in or out of the hi-fi world.
Like a few on here he was responsible for my introduction to Naim while at the Sound Orgainisation around 1990 and over the years I purchased quite a bit of kit through him and he helped get the best out of it in my home. When he set up Auditorium in the City, a few doors away from where I worked, I would spend the occassional lunch time listening to great music on great systems and chatting with the crew. It was a fun time.
On his last visit to my home a couple of years ago to set up a Lyra cartridge and tame a phono hum, we discussed how fantastic it was that his talents in setting up and fine tuning turntables were still so in demand. I was very pleased for him that the vinyl revival rewarded him with a long career for which he was so well suited and so enjoyed. He will be very sorely missed.
Condolences to all that were close to him.

Sad to hear this! Derek has set up my LP12 the last few occasions – while he was at StudioAV but mostly at Infidelity. In fact, my LP12 is probably due for another reset! Great guy – will be missed.

I’m not really sure where to start…

Firstly, thanks to the guys at KJ for a beautiful and fitting post which sums up everything I could hope to say. As the “new boy” here at Infidelity I’d only known Derek for 8 years - about the same as the time he’d also worked with my former colleague Jason at KJ.

Derek was a master at his craft, and somebody who you could rely upon for gentle but concise words. Like any seasoned worker in retail, he had a mischief to him and humour that allowed he and I to gently take the mick out of each other. Which we did. Regularly.

I particularly enjoyed the fact that he shared a liking for Douglas Adams “Hitchhikers…” series, and he and I could exchange humour based on towels, bowls of petunias and miserable robots.

Most of my time spent working with Derek was around the shop, where he was incredibly generous with his knowledge and experience. Occasionally we’d end up working together on an install. These will be the days I look back on with the most fondness - working as a team… Derek would set about the LP12 whilst I’d attack a fraim and cable dressing… we would work on independently of one another, but towards a common goal. I’ve been at this game a long time, but the approval of a seasoned 40 year veteran is always a warm thing to take away from a job well done.

I know my colleagues, and many of our customers, are all somewhat in shock. It was a sudden end to a true professional, and a real gent. Simon had known Derek for over thirty years, and everyone else here had known him for at least a decade.

I have spoken with industry reps, other retailers and customers. We all feel that a kind, gentle, knowedgeable man has been taken way too soon.

Our condolences to his girlfriend, Lucille, his great friend and business partner, Mark Digman, his family, and everyone who connected with Derek in some way.

I first met Derek in his “office” at the back in Infidelity at Hampton Wick. A tiny room with just enough room for a kettle to make a tea or coffee, but surrounded by just so many tools and parts for turntables, mostly Linn’s LP12. He seemed to know exactly where all the things he needed to service and rebuild any TT you could bring to him.
Give him an LP12 just a little off song (which I did) and he would turn it into something really special. He replaced a lot of Linn stock parts with those from Tangerine Audio and turned an excellent record player into a stunning one.
One of the evening events hosted by Simon in summer 2018 was a demo involving B & W’s 800/D3’s speakers. Amps were 552/500 and it was hoped to use the recently introduced ND555. This was not yet available so as a source component the LP12 fettled by Derek with Tangerine Audio mods was chosen. Derek was elsewhere so Carl was our DJ. No way did anybody feel this was inferior, quite the reverse in fact.
Posts from KJ and Mike at Infidelity pay just tribute to a great guy.
Douglas.

Just seen this news. I too bought loads from Derek in his days at SO and he serviced my LP12 several times - on one occasion the changes he wrought (without any major upgrades) were simply jaw dropping. I bumped into him maybe only three weeks ago outside KJ as he was leaving work. We had a quick chat and I had a bit of a moan about getting divorced, he cheerfully admitted that his life was heading in the other direction and that he was just about to get married. Top bloke. What a tragedy.

Derek was on his way to KJ one morning and stopped for breakfast at a café nearby when be just collapsed. This from Hitesh at Infidelity.
Derek can be seen on Utube going through the LP12 and other turntables at KJ.
Douglas.

Also just found out about this. Hadn’t seen Derek for many years but I’m another one who remembers him from his Sound Org days. Very sad, and yet another loss to the industry. Only one of the four that I remember from those days is now left now that Derek has passed on along with Roger and Steve. So untimely. Makes you really focus on making the most of things in the here and now.

what a sad story. RIP Derek!

Very probable. There are a few of us on the forum I think.