DSD, where and why do we use it?

Just wandering how popular is DSD format? My DAC will decode it. But to be honest i have never downloaded any music in this format. I tend to use FLAC, (PCM). Mind you i am no expert so is streamed music DSD?

Qobuz uses FLAC format which is encoded PCM. It’s a bit more complex for other streaming services but essentially they also use encoded or compressed PCM in various file formats.

DSD is quite rare nowadays, some downloads for purchase are available as DSD. Naim streamers convert DSD to PCM, anyway

I started experimenting with DSD when Naim first released the beta firmware, that took a few turns around the mixer to finally get it optimised.
It can be a bit special, but it does depend on how it was recorded, material/genre content and your equipment.

I’ve come to the conclusion that generally with DSD, the recording end is so important, most companies who use it tend to be very serious about producing a high quality recording all the way through to the end product, this is probably the main reason why we hear something maybe better and/or different with DSD.

My first listen to DSD was a wow moment with David Elias “The Window”. David manages his own recordings including his own studio techniques & uses DSD all the way through the process, so its genuine native DSD.
Moving on a few more years, David’s methods are confirmed by others. It’s best with material that does not require much if any studio processing, that uses minimal (preferably one) microphone, with small ensemble, acoustic, jazz, coral, folk.
Large orchestra, rock/ pop, larger coral that all require mixing & other processing from multiple microphones are far better with PCM (wav, flac etc)
Whatever, DSD has a part to play in the area it’s best suited to, just listen & make your own mind up.

I will give it a go. The holo DAC has a dedicated circuit for DSD. Would be good to at least try it!

I am using an ND5XS2 as a transport, i wander what this will output to the DAC? Or does DSD only work with USB connection

There are too many old DSD threads to pick and link a particularly complete one, but I am sure you will find all answers in one of these:

Hi @Suedkiez . Just a question because I had a notification from you asking to close a thread. But as it’s closed now, I don’t know which thread it was and what was the problem. Sorry for the diversion.

I haven’t asked to close a thread. I remember that one of these days I linked one of your posts/threads as part of the answer in one of my replies to someone else, and you receive a notification from the forum if someone links your post/thread. I can only guess that this is what happened, but I can’t remember which of my posts that was and can’t find it.

Native DSD, here you will find a catalogue of albums that you can download in various formats including DSD upto 128

Some interrogations on how lps are made, 45 pm channel Music Room

Interesting video which try to understand how really the lp reissues are done. All is clear or sometimes hidden ? [Michael Jackson Thriller MoFi 1Step: Is it from the Original Master Tapes? I Have Some Questions]

For anyone unaware the Norwegian site 2L has a ‘test bench’ page (www.2l.no/hires) which offers a very useful (and free) set of recordings of a number of different styles, all derived from original recordings made by them. As well as the original DXD, they are available if a range of resolutions, from 16/44 to 24/352 …and DSD at 3 different sample rates. (Also MQA.) Anyone interested can therefore compare and see what differences they can hear.

DSD doesn’t seem to be readily available, so I haven’t bothered investigating myself.

Ah thanks Suedkiez. Kind of you to have bothered to find.

Yes ta, my new ifi dac does dsd and mqa and I have some dsd recordings so I’ll give that a look. Not having tidal I’ve never heard mqa so maybe worth a listen to see what it’s about

I’ve certainly used it as a format for recording from vinyl, especially stuff that has a high value or that is likely to be difficult to replace.
I did a few sentimental cassettes as well, I found it gave favourable results from analogue sources.

Have some 774 DSD albums in my library.

762 are DSD64, and mainly come from SACD rips
9 are DSD128 and 5 DSD256, but these formats are only playable with Roon, which downconverts them to DSD64 and supplied as a DoP stream over UPnP to the NDS via SonoreUPnP bridge.
Roon has also convert directly to PCM 24/176.4 before submitting to the NDS as a PCM stream over UPnP.

I can also pass to the NDS over a S/PDIF but only a PCM stream seems to work. However the S/PDIF format comes with its own limitations.

You ever tried any native DSD DACs and compared with the NDS?

I downloaded a DSD album, also available in 24 bit PCM on Qobuz .

To be honest i would be delighted with either, there was a very small difference, which may have been more to do with volume than anything else, the DSD being slightly quieter but both versions are excellent
This with the ND5XS2 spidif output set to native into my DAC. Set to PCM the DCS recording sounded grainy. I guess because of the conversion in the Naim 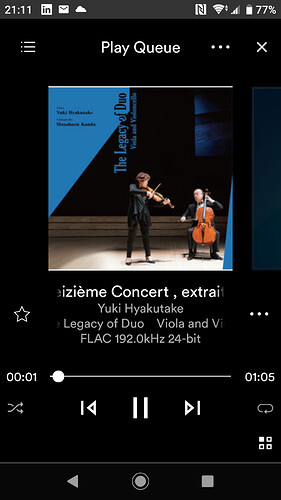 The Wikipedia entry on DSD is a good source of information on the format as a whole, but rather than the technical discussion, the one of availability really makes the decision for you.

Namely, this is a fringe format available on select recordings, and more common on certain genres of music than others. The idea that you can go out and shop for music online or even physical media and actually choose between DSD and an alternative is still fantasy. That choice appears as often as finding a blue lobster. i.e. it’s quite rare. It might seem more mainstream.

Out of a thousand albums in my collection, exactly 2 are DSD.

I have not, as happy with sound of the NDS, in a Roon-based system with a UPnP stream on the Ethernet input.

Running one 555DR PSU to the NDS, maybe a 2nd would add something more, but that’s a lot of $ to then only use half of the PSU in each.

It’s a good example of a format that didn’t translate from the professional recording industry to domestic at scale.
Primarily the mass market are driven by cost (meaning affordable, which round these parts can mean anything up to super yacht levels of cost, I digress) and ease of use. It also has to solve a problem such as in this case performing in some way better than alternatives.
I like what it offers and listen to recordings in DSD format occassionally as well as using it in a prosumer fashion for archival of analogue formats, it’s easy enough to accomodate it in hardware for playback but given the high production costs and lack of scale and desirability with consumers remains a niche for specific genres and recording scenarios (usually live and with real instuments so basically classical or jazz)