Dyson Cooling Fans - Any Use?

Is anyone using one of the Dyson cooling fans? Are they effective in cooling a bedroom at night?

If you’re talking about fans as opposed to air conditioners (and I’m not aware of Dyson doing an air conditioner), other than if they are positioned to blow cooler air in from outside the room, or blow warm air from the room out, to be replaced by cooler air from elsewhere, fans don’t cool the room but cool the living things through moving air increasing the rate of evaporation of water from the outer skin (i.e. sweat in the case of humans).

I know someone with a Dyson fan, and although I have not compared directly it seems to shift more air for its power compared to a conventional multi-blade fan, and does not seem excessively noisy. Probably easily compared in a shop selling both if one is available with fans on demo.

Yes, it’s bit much to expect it to do anything other than shift air. The reviews on the Dyson website seem to be very mixed (on the cooling side).

We use one and we think it helps make sleeping on hot nights more comfortable (we don’t have AC). My wife has it quite close to her side of the bed to get a bit of air movement directly across her. The low-level white noise it makes is also actually quite soothing, and masks some outside noise, I think.

A fan doesn’t do actually anything to cool the air itself, but by moving air that is already at a lower temperature than body temperature (hopefully!) over the skin, it assists in cooling the body. Added to this is the effect of faster evaporation of moisture (sweat) from the skin.

We use a purifier-fan and it’s perfect for the bedroom and/or office. Oscillates, remote controlled and quite silent. We’re happy with it.
Dyson Pure Cool Me Purifier Fan 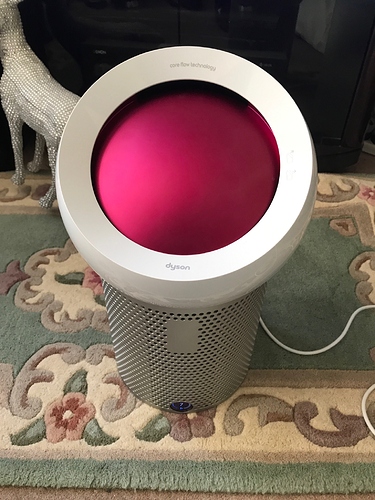 We’ve had our a couple of years now. It does a great job of appearing to cool a room, with the most important part being that it isn’t noisy (hence great at night) or blast you like a fan does. They are pricey, but look great. Are they worth that price? Possibly not, but we are audiofiles and therefore we know quality costs.

In my second year with Dyson cooling tower. Find that set in oscillating mode at lowish power setting shifts enough air to make sleeping easier without excessive noise. Better than most but more expensive. In the lounge on full blast pretty impressive but you’ll need to turn your music up.

I have one under my desk! It helps a bit but today was still hot

When I grew up in the south of England it was only about one or two days in several years that reached the 30s, and highest temperature about 32. The temperatures in that part of Britain these days frequently reaching, and well exceeding, that is testament to climate change /global warming.

Not living in that part of Britain since the end of the 80s, I have not experienced temperatures that make sleeping at night difficult, except when on holiday abroad, so the idea of air conditioner or fan at home is alien to me.

Meanwhile a pet hate of mine is how weather forecasters on TV are so south-centric: “another baking day today” when 2/3rds of the country may be unseasonably cold.

IB - Living in the North East of Scotland (where there can be more than a 10 degree C difference!) I know exactly what you mean…although I normally let Carol off with it for some reason…and wait for the local news weather…

As for the Dyson, we have an older fan from our first child, so over ten years old now - we normally take it away in the Motorhome for use in the awning, handy as it has a hot and cold (Scottish ambient) air circulation function…but it is rather loud even on lower speeds, something I think they improved on in newer models.

I thought I was the only one, again only experienced with older models, made my tinnitus scream and the cats refused to come in the room.
We have a number of standard fans, I hate the noise. Dearly beloved currently swears by a “cold air” fan from Lidl. Has a water tank and blows damp air around. It’s small, localised, but keeps her happy.

I’m in the US. Can’t imagine not having central air. Also have a nice ceiling fan over the bed.

Unfortunately they work very well at evaporating the sweat without too much noise. The one I bought a few years ago is a bit flimsy but I’ve managed mot to break it yet but it never gets moved. If someone in the house picks it up by the loop it won’t last long by the feel of it.

We have them in all bedrooms and use our own every night of the year (the slight noise help us sleep now we so used to it).

Can’t imagine not having central air.

Very uncommon in domestic properties in UK, though now with summer temperatures in the South East of England regularly reaching and maintaining levels unheard of when I grew up there due to climate change, perhaps it will start to become more common …adding to CO2 emissions.

Thanks for all your input. It sounds like there’s some benefit to be had. I might have to try to stomach the cost!

The air gets quite dry in winter where we are and of course the heating comes on. We use a Dyson fan/humidifier in the bedroom and it works well. Fairly quiet and gentle as it seems to move the air in a broad arc rather than a concentrated blast. The only thing I don’t like are the overly bright LEDs which cant be turned down or off so they have little stickers over them.

All fans ‘work’ the air creating heat, the motors And controllers are not 100% efficient and create heat. I noticed the expression ‘air cooler’ on a Dyson advertising banner In A department store, I was interested and asked the Dyson salesman how it worked. At first he rattled off the sales pitch, then he just got angry, how dare anyone question the great Dyson. IMO, they are an over priced Gimmick. I think, from the demo I had they are quieter though and they do look swish, ‘for a fan’. So if you like the posh fan why not?

The primary reason why most people feel a benefit from a fan is that the air movement increases the evaporative effect on your skin, helping you to dissipate heat from your body. As a previous poster said, if you can use it to encourage air movement from a cooler place that would help.

I believe there was a system used in the Middle East where by they would build a tower at the edge of a property, like an oversized chimney open into the ground floor and would hang wet ‘fabric’ or drapes supported on rails across the Width of the tower, cooling by using the evaporative effect.

With electricity now more sustainable than other common energy sources will see more heat pump based heating and cooling Units creeping into UK homes. Our residential designs are changing fast.

I bought the large floor standing Dyson bladeless a few years back. Absolutely utter rubbish for the price.

Way more noisy that a regular fan and not any better at stirring air. I simply cannot convey how much noisy the air flow is compared to a regular fan of similar air flow output. I felt utterly robbed and would never throw money in that direction again. I still have it in a storage locker somewhere but a another brand’s vertical floor standing fan did a significantly better job at 1/6th of the price and about 1/3rd of the noise.

Once I have access to the storage locker again, I must remind myself to take the Dyson to the tip (metaphorical speaking - there are no tips here).

I notice that having given up on electric cars as ‘too hard to do’ he has turned to hair styling tongs, with the latest one not involving fans at all. Most unlike Dyson.