Members. I’ve been in the forum for a little while now and I’ve been educated by the knowledge of you all.
For years my kit has been just plugged into a normal 240v UK domestic socket - and it’s sounded just fine.
However, now I know what I know, I realise that I’ve been naive, to say the least. Some of you have convinced me that this is not the thing to do, so being a little OCD I’ve decided to do something about this.
But what exactly. I’m not an electrician or an electrical engineer or a DIY person who will undertake such a task so what does one do. From what I’ve seen open this forum there’s two options.
Run a dedicated supply from the fuse board to a double outlet socket to service exclusively my Nait 5 and my NAP 150 or buy some aftermarket device to plug into my unaltered domestic sockets which will somehow smooth the supply and improve my sound.
In plain English (please) can you just advise me on the pros and cons of each approach.
Thanks.

My advice is to get a dedicated supply from a dedicated consumer unit. There are dozens of threads on this and I urge you to use the search to find them. In short, split the meter tails with a Henley Block, ensure the earth is taken back to the meter and then run a 10mm2 cable to unswitched sockets.

You could get a filtered block but in all probability it will constrict the sound and remove dynamics.

So that would be a separate board attached to the fuse board feeding a separate mains supply that the Naim kit will plug into. I understand that but exactly how will that improve the sound over the other methods you’ve mentioned ?

By getting your hifi on a separate radial you remove it from all the “dirty” electrical items in your house notably - fridges, condensing tumble dryers, hairdryers etc. It gives you a clean supply for your hifi, and as @hungryhalibut has said before is the foundation for any decent hifi system.

Of course, you can still get some “noise” on your supply from others in the neighbourhood, but you can’t do anything about that.

I had mine installed this year and the uplift was considerable, but I occasionally get humming transformers still, although nowhere as as often. It’s a leap of faith to get it done, but once you have you’ll ask why you waited so long!

The point of splitting the tails is so you have two completely separate consumer units. If you still have a ‘fuse board’ I’d suggest it’s time for an upgrade to that as well.

It’s possibly worth having a look to see how your house is already configured. On my house made 2008, the lounge, where my hi fi resides, is on a separate spur to the kitchen, the lighting, cooker etc. This means all the noisy appliances are already separated from the hifi.

I judge what I have so far as being sufficient for now.

Running cable though the house requires opening up walls or routing new cable around my house, and therefore subsequent re-decoration. Your house may be easier. A mains block requires no re-decoration and is “plug and play” but do not appear to be universally favoured on this board.

I’ve never quite understood the separate spur of consumer unit idea. Everything is still connect together, electrically, so how does a separate spur help?

Think of it in terms of water. Imagine a massive water tank in the loft with a separate pipe coming off the tank to each tap. So now you can see how if one tap is on, it won’t effect the others. Now on one tap imagine a dodgy washer causing that single tap to vibrate. That vibration might effect any other item running off that tap pipe, but it’s unlikely to effect the other runs from the tank to the other taps. Hope that helps, if not have another drink

I’m not sure how well that analogy fits, TBH. With the water and the header tank there is air involved, so any vibration going up the pipe will, to a greater or lesser extent, be reduced because of the air over the header tank. I don’t see the equivalent in the electrical system.

Thanks to all. It makes sense, and the good thing is I believe it may be already on a separate spur looking at the RCDs on the board/unit.

It won’t help with the analogy, but tap vibration is often caused by air trapped in the tap, and that air doesn’t travel back through the pipe, so the vibration at the tap will gradually loose its energy as it reaches the tank, Perhaps ignore the vibration analogy

My system’s transformers buzzed a lot louder when my wife was using a hair dryer despite a separate 10mmsq radial.

I’m highly sceptical about some of these power upgrades, maybe me hearing isn’t quite up to it I don’t know BUT… A dedicated spur from a dedicated consumer unit fed via a Henley block from the tails directly out of the meter really does make a difference, probably one of the best value for money upgrades I’ve ever made in a hobby known for it’s diminishing returns. Think of it as being similar to standing in a darkened room looking out of a window covered by a fine net curtain then removing that curtain. You can still see everything you could before but there is just more clarity to it all. Also from the day I first plugged into my dedicated spur I’ve not once heard my amps humming (135s) which previously used to break out into a loud hum once in a while when the fridge started up

Well, I understand that this expensive kit also needs a service now and again. Just like expensive watches, you pay a lot up front and then you have to pay more to keep them in tiptop condition. With a mechanical watch I can just about understand it, but with electronics I’m not sure that it’s required. I’m sure others will tell me otherwise. Or is it like the Emperors new clothes ?

Some of the electrical components have a finite lifespan and as such, will degrade. Ergo, they need changing.

Think of it like a timing belt on a car, it can do 100k miles or 5 years. However, even if you have only done 10k miles in 5 years, it will still need changing as it has de-graded.

Over Christmas I’ve looked at the practicality of having a separate power supply. It looks like it’ll be expensive and involve lots of redecorating - neither of which I fancy.

So that leaves me with something that will just plug into the current mains supply and will then be broken down into three separate outlets for two Naim units and a Linn Majic DS.
Can you advise me please.

It’s a shame you can’t do the dedicated supply which is very worthwhile. For your present setup I’d take a look at something like a Grahams Hydra - a 3 head version (5 shown below) should do the job nicely. 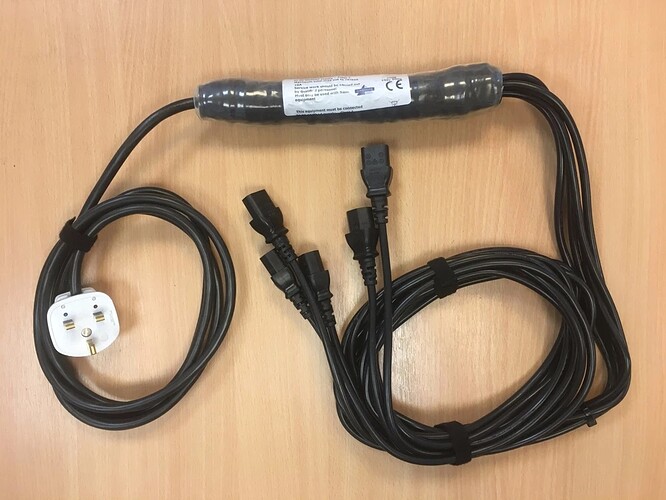 Is that from Graham’s HiFi in New North Rd N1 ?