For those who really want to spoil the pleasure

When Walter Becker passed away in September 2017, it marked the end of one of the most quixotic music partnerships in modern American popular music. The only constant members of Steely Dan, Becker and co-conspirator Donald Fagen created some of the...

It’s both extremely interesting and frustrating, but it can help all of us to take our musicotheque (be it CDs or digital files or even LPs) less trustfully and definitively. I hope it doesn’t violate any forum rule (something I’ve become a master at, lately and sometimes unwillingly).

I will stick with the vinyl then …

I will stick with the vinyl then …

THE vinyl?? There are so many debates as to WHICH vinyl is “best” as well.

I only have the UK first press. Life is too short …

Dozey, life’s never too short to hunt down the best sounding issues of a Steely Dan album, particularly Aja. The UK first issue is pretty good, but the US 1st issue (handwritten AB 1006 in the dead wax) is definitely the one, and it’s not too hard to find a good copy for an affordable price either, even in the UK.

OK - I will have a look. It is one of my top 20 albums, to quote another thread.

@Richard.Dane is that the “Santa Maria” pressing?

Kevin, truth to tell I don’t know how to distinguish the Santa Maria pressing from the others. I know from reading various threads elsewhere that the SM press is generally considered best of the AB1006 presses, but mine is hand written AB1006-A and AB1006-B in the dead wax. Whether it’s a Santa Maria (CBS) press or not, I don’t know as there’s no other indicator. What I do know is that it sounds very good, and appreciably better than the early UK press I own. Now, I don’t own the much revered Cisco reissue, and nor do I own the much reviled Mofi LP either, so I cannot say I’m an expert on Aja issues. I do have a near mint copy of the AB1006 US issue and a totally mint early UK issue cut by Allen Landau (usually not a good omen - sorry Allen - but this is one of his better cuts). Note that Allen Landau should not be confused with Allen Zentz, who cut some fabulous SD LPs. I also have the 2008 Back to Black reissue of Aja cut by Greg Moore at Masterpiece. The B to B is actually rather good, if a bit more “hifi” and likely from a good digital source rather than analogue. It’s cut fairly hot and has good clarity and surprisingly good dynamics, brighter than before and with a stronger bottom end. But it lacks the luminosity of the US original and you sense that the AB-1006 is at least one step closer to the master tape.

Anyway, as I say, I’m no expert on Aja, even though I seem to have a good foot and a half of shelf space given over to Steely Dan LPs.

@Richard.Dane I ask because I was in Brighton last week and whilst rummaging in a shop I saw a gatefold Aja, labelled as a “US first press, Santa Maria pressing” with the catalogue number you mention. It looked in lovely condition (the lyric insert was missing though) and I was sorely tempted at £22 but passed.

A quick look at Discogs seems to confirm it was the one you’re talking about.

I could kick myself now!

Yes, it would seem that’s the ‘Holy Grail’ issue.

Inspired by this thread, I listened to the US AB-1006, the UK “Allen”, and the Back to Black this evening… 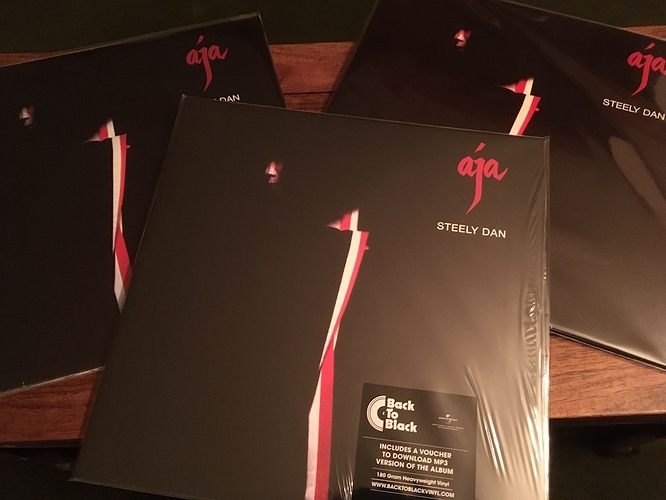 Are you going to pop back and buy it Kev? If not, care to divulge where you saw it? Brighton is just down the road for me …

Just listened to my ripped copy (must check which CD it was sourced from, although I am sure it is not the Steve Hoffman version) and I can’t hear the left channel burst at 2.18 on I got news for you or the click at 1.03 on Black Cow.

Interesting article and I bet the Hoffmen love it - another CD where the best version is always the one that is impossible to find.

well, I confirmed what i wrote above. The UK issue, while nice in isolation, was a bit safe and lacked the dynamics of the US issue. Ultimately it also sounded at least a generation removed compared to the US issue, which had more life and much greater “bloom” to it.

The big surprise though was the 2008 B2B reissue, which sounded way better than you ever credit, if obviously EQ’d over the others. The top end is more exposed but overall it gets away with it. If you want a great (modern) sounding copy on vinyl that’s guaranteed to be affordable, unworn and well pressed, this might just be the safe bet.

Thanks Richard - very interesting. I have Aja on a US MCA pressing, which to my ears sounds very good but the “Santa Maria” sounds like the one to have. If it’s gone when I return to Brighton I might take a punt on the BTB.

Checking mine; I have ABCL-5225. Originally £2.79 from WHSmith bought who knows when ago. Is this the original U.K. issue Richard?

Steely Dan - Aja (MCA MCLD 19145), UK Nimbus Pressing, Hoffman Mastering is the one I have.

If it’s on the ABC label then very likely the UK original. What’s in the dead wax?