Fraim is going in

Well as you might have read, I have given in to the pressure off fraim, and so today picked up some levels.
Decided that although I don’t have all naim gear these days, what I do have does deserve to be on it, it is going to give me a few problems with my other gear, but willing to try and work around them.
Its all in the room ready to be built up, and have 6 chips coming Monday also picked up 2 naim power lines for the 500 and 552, so I will be completely naim.
Anyway a pic for now.

Same for me too
Over the years I’ve concentrated on black boxes and cables
The last couple of years I’ve kept an eye out for Fraim I’m putting 11 boxes in it over 2 stacks and some different height shelves so I took it that I’d be buying but by bit over quite a time
About a week ago did a deal for a base and 3 levels, so a start at least, then another base unit and this afternoon I’m picking up the remaining med and standard levels

Yep some off it, the rest from another guy, was handy as i was going to have it all, but the middle size leggs didnt really fit with what i wanted

Been at work, but managed to build it up ready.
Need the chips first and then I can properly level it up.
Still not decided on what will go where, but I have a spare shelf and spare standard legs, so I can if I want fit 2 standard levels in to replace the tall and keep it all the same height, or just use it all and keep the spare standard legs.

Looking good. I am sure you know already but as you set up it’s best to put one component in with cables for each layer of Fraim and build up. Otherwise ball bearings and glass falls all over the place. I have been there! Twist the ball bearings in so they squeak as well.

O yes, i know all to well thanks

Other thing is glass is meant to be a certain side up. Never quite got to the bottom it. Dealer told me to pin it and it will ring. Maybe other forum users can give an ultimate guide. And the components and glass should be as close to the front edge of the Fraim shelf as possible.

Got all the instructions, templates, spanner and bar.
The glass has the cups already stuck to it, and looking at the template, they are in the right place, even have the template for the 4 small rubber dots that fit inside the feet.
So should all be good, i hope.

I think speaker positioning may be compromised Dunc, going via the last pic!

plus the rack levels to go with it, and there is a 300DR, CDS3+XPS2, and Rega Neo & Aria too. Any input very much appreciated

I don’t have a Fraim but my rack is also poorly accessible from the back and has a brains (left) and brawns stack. The brains’s back is completely inaccessible. I can get to the left half of the brawns’s back, i.e., the power plug side.

The last time I rebuilt, I also did it level by level and as there was only the 300 and the CD/XPS at the time it was somewhat manageable. However I am quite unsure how to proceed with 2 additional burndies and snaic while maintaining proper cable dressing. To keep burndies off floor etc., I figured I will do it like this (pictures below):

I’m afraid that if I add one level of each brains and brawns at a time, everything is nicely accessible at first, but I end up with cable after cable that can only be attached at one end because the other side is not up yet, and dressing will look fine a first but will be messed up in the end.

If I build brains first, it will be difficult to dress later as the back of brains and half of brawns will be inaccessible

Thanks for any input by more experienced stackers.

Edit: Pictures will help, below. This is the current state which is temporary. The number of levels on the left will not change, but the current Nova will be replaced by the NDX2 and the CDS3 by the 252. On the right, two levels will be added. The CD will be on the same level as the P8, so there is additional space between it and its XPS one level below.
Ignore the nest of Powerlines in the back pic, this is the PowerIgel and will go on the floor behind the brawns rack, so it will not be difficult to reach the PSes. The only Powerline that needs to go to the brains is for the Aria 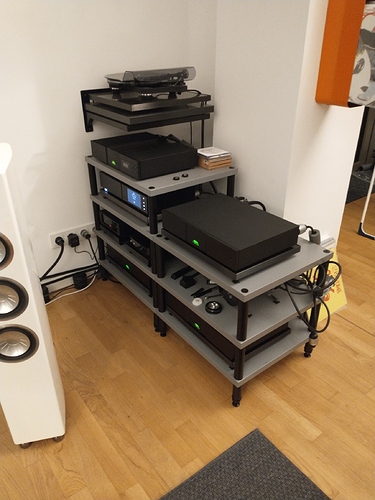 @Dunc, it sounds like you know what you are doing, but if you have any problems, Richard Dane has put together a nice guide on ‘How to build the Naim Fraim’ in the ‘Frequently Asked Questions’ room of the forum, in case you were unaware.

I promise you, Fraim(s) are worth all the faff!

My best advice is to leave some extra space behind the Fraim. We love ours and the return on investment has been well worth it.

I’m afraid that if I add one level of each brains and brawns at a time, everything is nicely accessible at first, but I end up with cable after cable that can only be attached at one end because the other side is not up yet, and dressing will look fine a first but will be messed up in the end.

I have a similar situation, maybe more difficult in that my two stacks are also in a corner, but inside a custom built cabinet, which is really just a frame with a pair of doors, and a detachable top and side panel. The few times I’ve rebuilt it I’ve had the same problem, in that it goes well until you’re past about the second level.

My approach is mostly the same as yours. I build and adjust each level, and place the boxes and plug in the interconnects as I go. What helps avoid the tangled mess is to try to dress the free end of each interconnect as closely as possible to its eventual location. To do this, I put little tape marks on the wall behind where the interconnects to the higher boxes go. I then use a combination of elastic bands, tape, and fishing line to keep the loose cables in their intended routes. With the opening behind your right hand box, you’d need to get creative to use this method.

I haven’t quite gotten there yet, but every time I rebuild the stacks, it works out better than before. Typically, I’ll need to revisit the job a month or so later to address various minor issues. This usually involves carefully sliding out a couple of boxes from the middle of the left hand stack to give me better access to the lowest and middle rows (I can get to the topmost rows from the top).

Will do the swap over Monday night after work, as my chips should be here by then.
Quite looking forward to it

I really like the look of your existing wood veneer racks (not to take away excitement from your new project, though).

To be fair so do I, plus with the glass ceramic balls etc, I feel its very sorted.
But made the decision and so will swap ot over and sell the other on

I am pretty sure you won’t regret that decision, Dunc.

Thank you. Your fishing lines, etc. reminded me that I have a stand for musical notes, and as it is fold-able it has a bunch of screws at various heights. I guess I will put it up behind the right-hand stack, then I can probably use wire to attach the right-hand sides of the various cables to the stand’s screws at the approximately correct heights. I guess I will have to take 2 days off work

Pleased to see you got there in the end Dunc. The Fraim boxes look very familiar to me !