On a bit of a whim I bought a Hadcock GH282 I’ve been wanting to try a Unipivot on my Technics for a while and at £145 from Stamford Audio I couldn’t say no.

I know it will be a pain to set up and I’ll need to buy an armboard but it will keep me out of trouble for a few hours and who knows it may just work.

It has a detachable headshell and finger lift which dates if after the mid 80’s I think other than that I’m not sure until I get it in my hands, it has had a couple of variants over a couple of decades but as soon as I have it I’ll post some potographs and seek your help dating it. My gut feeling is mid eighties as it has quite stubby RCA plugs a bit like early Linn arms where as later ones have a more conventional plug.

It has a black wand I’m sure if that can help date it or not as I’ve not seen too many early ones but I’m pretty sure it’s not a Mk 1 or a Super Silver so that leaves the Super or Export.

The Hadcock GH228 has been made since the '70s but with a number of changes along the way. IIRC the black wand indicates it may be an earlier model and with an aluminium tube rather than the later stainless steel. These worked better with higher compliance MM carts. Photos should help.

I would suggest rewiring it at least, and you should have a lovely arm, and a real bargain too.

A word of warning.

I can vaguely remember the Hadcock unipivit arm, but never actually tried one out. However, back in the 70s/80s I did have a Transcriptors 9" Fluid unipivot arm on my Transcriptors Hydraulic Reference Turntable. As Richard suggests with the Hadcock, the Transcriptors unipivot arm much preferred high compliance MM cartridges. Reviews always recommended against using lower compliance MC cartridges. I used mine with a Shure V15/III, an A&R P77 (not very successfully) and finally a Sonus Blue label which matched it supremely well.

My word of warning - the Transcriptors arm looked beautiful and sounded pretty good too. However, being a unipivot arm it was a nightmare to try to get it set up properly. With any other arm it was just a case of adjusting the height, setting the tracking weight and perhaps adjusting the headshell a little. with the Transcriptors 9" Fluid arm, there was a need to adjust it simultaneously on every conceivable axis and more besides.

If the Hadcock is anything like that, 'm sure you’ll have many hours of endless fun getting it just right.

About 1978/79, an LP12 with a GH228 and a Decca London, then the recommenced arm for that cartidge, hand cueing was not for the faint hearted. I eventually gave up when the third cartridge would only work on one channel. Radford Hifi replaced it with a Supex SM100E.
Nothing approached the sound and I don’t think I would go back there now.

If it’s like my two unipivots, Aro and Schröder, you can home into the right setting by ear but it take quite some time, especially when you don’t know what it’s capable of. Every screw tension has an effect as well as the usual variables, depending on the resolution of the rest of the system to reveal them. The Hadcock has a reputation for being a bit finicky but I don’t know how it compares. TNT liked the Cartridgeman Musicmaker on it.

I have one, it is still mounted on the first deck I ever bought in 1984 (I think!?), a Systemdek II. I simply can’t part with it, even if it now sits in a cupboard…
Mine is all black and I believe the tube is Aluminum.
If I remember it is quite easy to adjust the unipivot part, use a mirror to place the needle on and reflection will guide you.

I used Goldring and Linn MM carts with it.

I’m using an Audio Technica AT 150EA which is quite a high compliance MM
I think?

Thanks everyone as soon as I get pictures I’ll post them. Before I get started I need to source an armboard It’s a strange fact that one will cost me around two thirds what I paid for the arm.

I have just ordered an aluminum arm board from Sound Supports for a very reasonable £45.

At first I thought it was missing it’s second counterweight but looking on line there was an early version with a single counterweight so hopefully this will help one of you eagle eyed analogue experts to date it.

It will be a good experiment to see how the Technics responds to a Unipivot to my mind
a higher mass more solid and more stable deck like the 1210 should provide a better base for this type of arm rather than a suspended chasis record player.

If the experiment is a success I’ll look into getting a more modern unipivot and this Hadcock will form the basis of a second deck for another system. 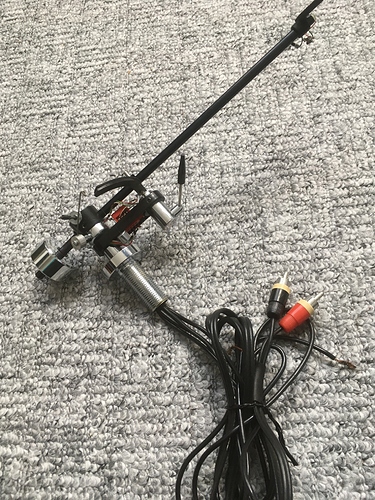 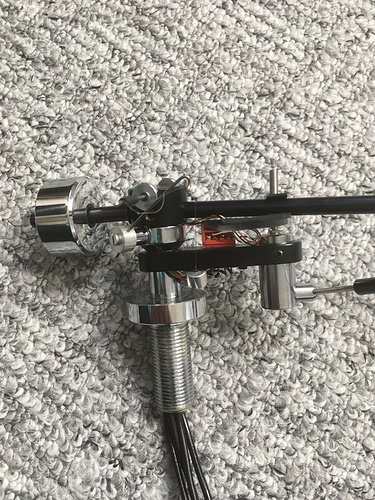 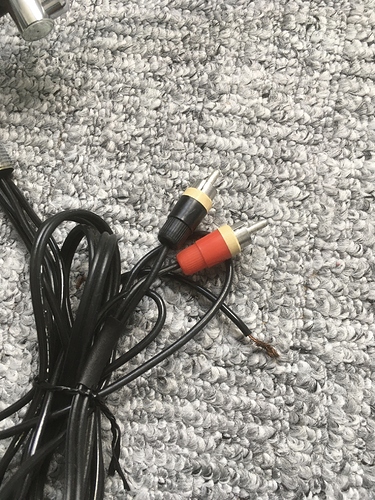 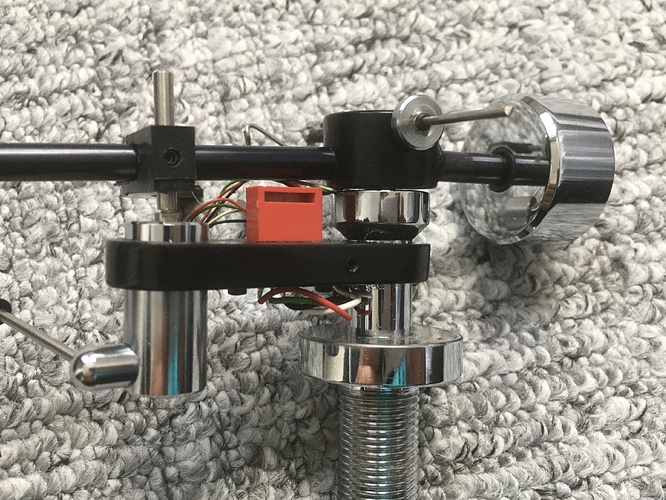 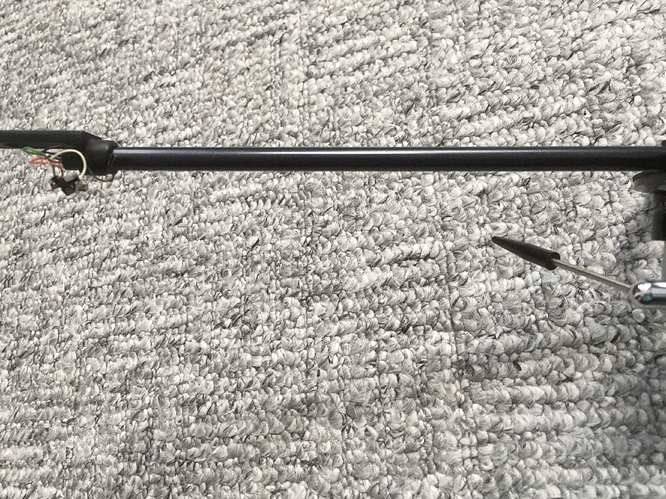 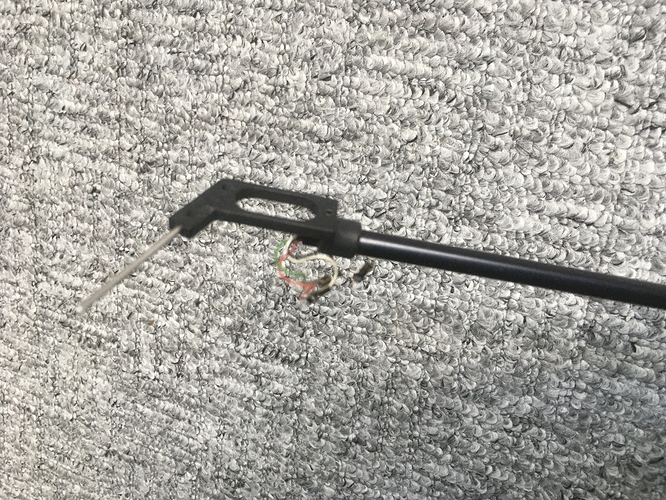 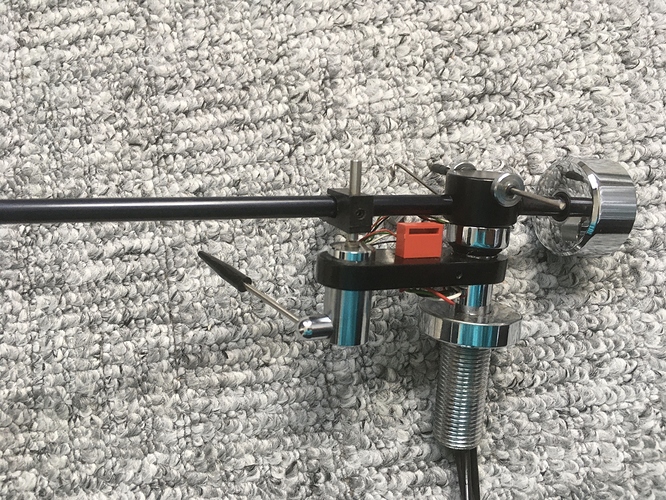 The all-black arm top and the pair of balance weights indicates it’s likely quite an early one. A re-wire may be a very good upgrade. And if you like the GH228 but want to move upon a gear or two, then the much more recent/current GH242 is a very worthwhile move.

Yes it was a 242 that got me interested in these arms in the first place and I was talking to someone about a possible purchase when this came up.

Only thing that slightly foxes me is that the cueing mechanism and deck looks later than the earliest ones, so perhaps a transition model - I’m no Haddock expert though, but I’d guess, early to mid '80s?

The headshell can also be removed which along with the fixed finger lift could back up that guess of 80’s rather than 70’s. I know the son took over much later after this and as well as build quality improving somewhat some tweaks where also carried out and added wether this improved things is another question as it is the simplicity of these arms that is the attraction.

I’ve posted pictures on another forum and someone there though it might be either a Super Export D or Super Export E. Further inspection reveals that the arm tube can be lifted off completely after unplugging the red box that contains the wires so that another arm tube or more with different carts can be swapped over.
I was aware the arm tube detached but thought it was pulled through beneath the counterweight.

Armboard is due at the weekend then after I’ve had a listen as is I’ll probably go for a rewire and will decide between a 99% pure silver litz or a Cardas.

The Hadcock is in bits before being rewired. 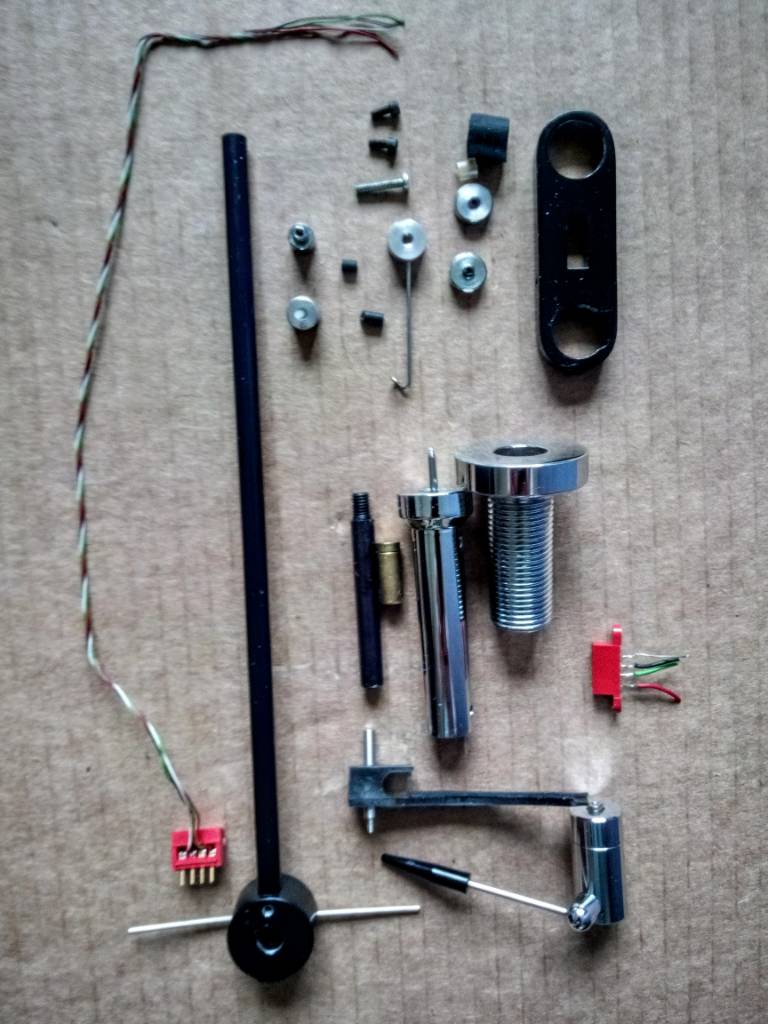 I went for a 99.999% pure silver litz to try and add that little bit of sparkle that’s missing from my Technics 1210.

The Hadcock now has a new silver litz internal cable fitted and has benefitted from a good polish.
I’ve decided to use a Van Damme silver plated cable from arm to phono stage it’s exactly the same cable that Audio Origami uses in his cables which I also use on my RB300 and also used on an Ittok.
As you can see this Hadcock uses two outriggers with small weights to balance the arm horizontally which was usually done with an apparently very annoying second of centre counterweight so hopefully it will be easier to balance. 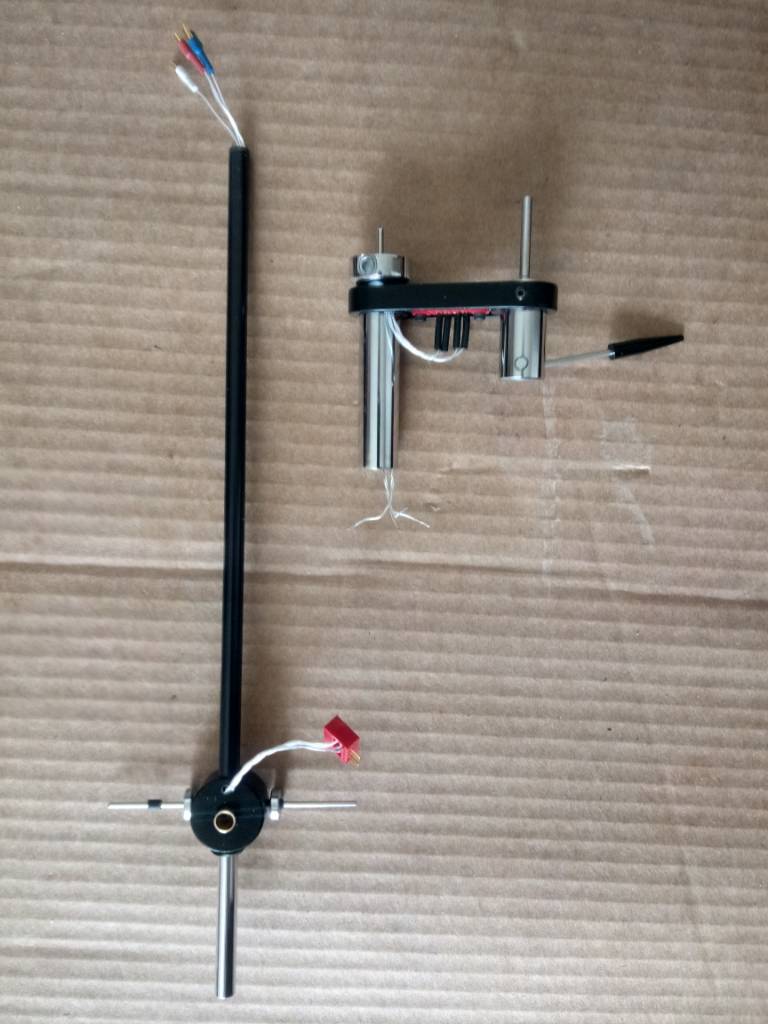 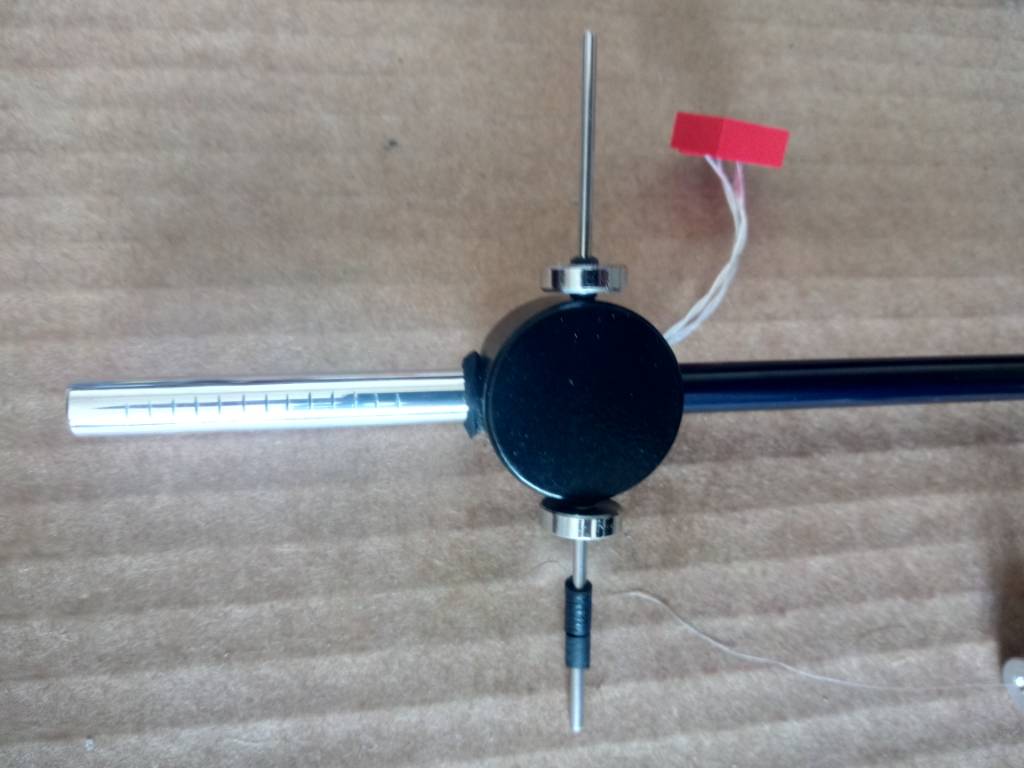 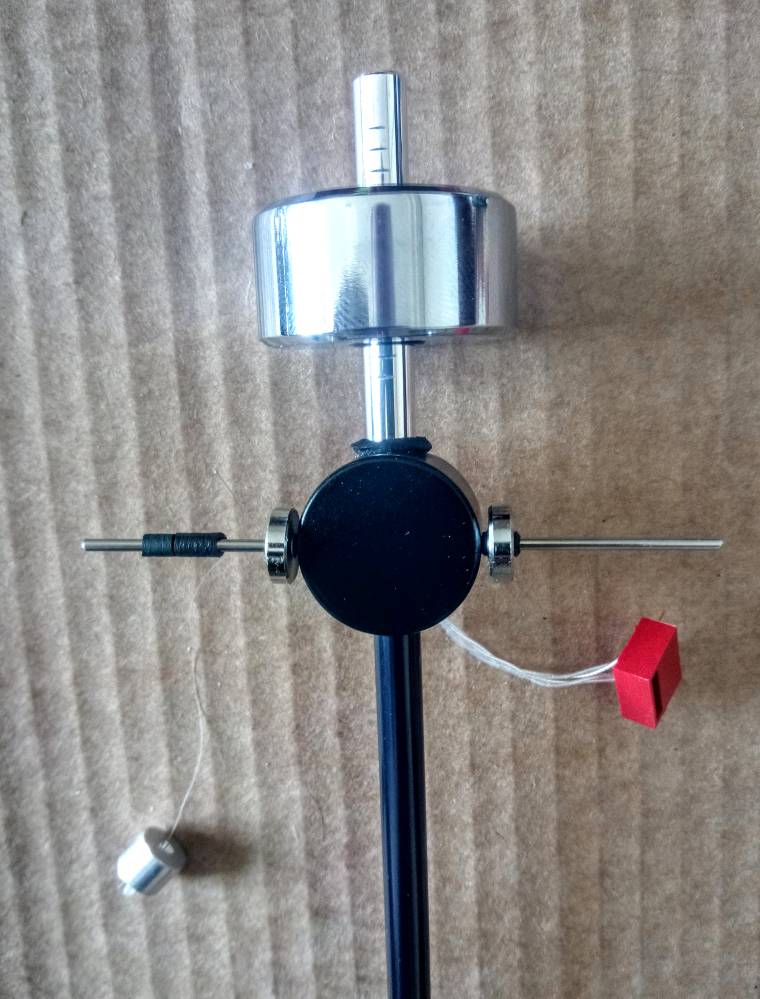 I must admit I could never get on with this presentation, luckily my dealer had a customer selling his Grace / Supex so purchased them and it stayed a couple of years. Moved over to the Ittok when they came available firstly with the Asak, then the T version.

Through the next couple decades I had 3 Ittoks the first two were exchanged one for the thicker pillar, the other for a bearing problem all FOC.

In 2004 purchased an Aro and have never wanted to change it such a lucid performer just sounds right.