Have I Got This Right..? (Twelve-Pack / NAXO Connection)

So, the goal is to connect six NAP 250s up to a pair of ‘split’ Isobariks. Rather than modify the NAXO, I want to connect everything using custom cables. I’d be really grateful if you could look over the following two diagrams and confirm that I’ve got everything right: 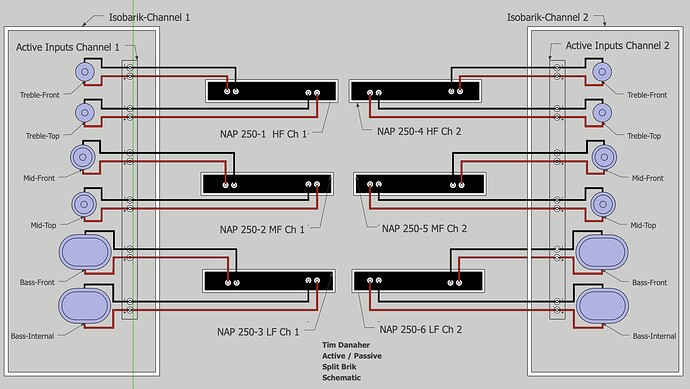 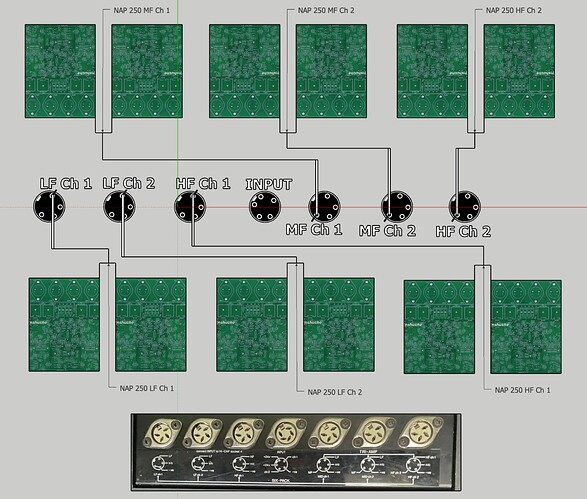 The aim is to have each channel in the NAP 250 carrying the same signal: ‘dual mono’ if you will… I’m assuming that the three pins on the XLR are Channel 1, Channel 2 and ground…?

Before you head down this route Tim you may want to find out from Naim whether the NAXO will be able to drive so many cables without being pushed into instability. The stability margins on the NAXO/SNAXO re. driving cables are fine for what it was designed for - just enough for the Naim DIN-XLR cables (but not SNAICs which are too capacitive, so active leads required) - but if you double these up, I’d guess you may be in trouble and wonder why the sound is poorer than expected.

I can’t help as I don’t know anything about NAXO or the DIN connectors, nor do I know the internals of the Isobarik, and that latter point raises a question: how are the drivers connected within the ISobarik? I.e. are they in series, or in parallel, or are there any additional crossover components involved? If currently they are simply in series or parallel, I think the only thing the extra three 250s would achieve would be greater power availability, which makes me wonder if better might be to keep it simpler and just double up on the bass, which is where most electrical energy is needed, or otherwise go for ‘6-pack’ with better amps…

Why bother with 250s? Surely the way to go is traditional SNAXO/135s?

Because I have six NAP 250s? This way each driver gets its own stereo channel.

I’m not the first person to have done this.

Would two Snaxos do the trick? (I suspect matching might be an issue.)

how are the drivers connected within the ISobarik? I.e. are they in series, or in parallel

They are wired in parallel. Therefore to connect them to individual power amps, modification to the internal wiring, including disconnection of the internal crossover (if fitted)

The idea of driving individually all six (per box) speakers is not new. Indeed there is a thread on a another forum documenting the renovation and modification of Briks.

Thanks for this. Most interesting. Never heard of a twelve pack till today. Can anyone explain the benefits over a six pack? OPs response was just sarcasm.

I’ve actually got two NAXOs, so could be worth a shot?

@TimD , I’d pixelate your surname on the first drawing.

Good lord, with so many decibels being created, the OP will soon be needing an ear trumpet.

4x 250s is sufficient ,simply split the B139s to give them their own direct to amp connection . Everything else is over the top . Any amp that cant drive two tweeters is pointless . Sometimes more complexaty is bad .

Iron maiden have some gigs coming up next year. Maybe this is part of their new “retro” PA system.

Nothing to add but look forward to photos and your listening impressions.

Are you listening to the Briks at the moment, and how have you got them set up?

Thanks! Briks are set up at the moment running on two NAP 250s, one channel driving the front-facing drivers, the other the internal B139 and the top-firing drivers, like this: 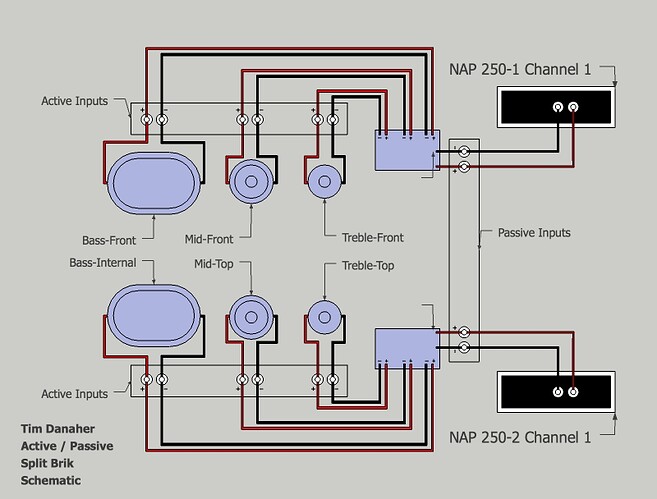 I love the ambition of the one channel per driver plan and who can credibly say if it’s worth it without trying. There’s a lot of scope to coq it up though and lose a tweeter labelling each cable unambiguously will essential. The details of cable dressing and power distribution will take a bit of sorting too I suspect if the setup is to be optimised.

Interesting diagram, Tim. Does that mean that your Briks are already wired with separated inputs for each driver, i.e. six input pairs (+ and -) per cabinet?

Wow that’s cool ! Can’t wait to hear how you get on with it !

Sorry @TimD I don’t have any advice but wish you all the luck with what looks to be a worthwhile and fun project I’d love to hear something played really loud on the that system please add some pictures once you’re up and running.

I’d also like to apologise for any unhelpful or sarcastic comments mostly you will get positive responses but unfortunately the odd barbed and unhelpful one too.