How does your system handle this?

Curious as to how your systems handle the bass in the passage from 6:13 to 6:23 in the song “vision” by McCoy tyner. I’ve used this song for auditioning a lot of equipment and nothing yet has done a good job of reproducing the bass in this section, with some notes whispers or non existent, others quiet. It’s worth listening to some of the bass playing in the preceding thirty seconds too for comparison, as this can be more easily reproduced although some systems do a very poor job there too.

Tried to listen but only managed about 4 seconds. That track was way too erratic for my relaxed evening listening. I’ll try again tomorrow.

Not my music and not the best bass recording I have heard (and I like to believe that my system does bass well), but to me it sounds as if someone inadvertently touched a dial on the mixing board or something at 6:13

Hmm, your speakers do purportedly go very low too. This is what I’m wondering, is it just bad mixing, is it just low playing (yes we can hear some not so low tones but these may be overtones, hence being quiet as the overtone will occur at a lower amplitude if I understand physics correctly) that maybe our ears don’t really hear that well anyway, or is it low playing that a great system will reproduce adequately because it can reproduces low notes and or has enough detail in the low end such that the notes have shape and texture to them so we can more easily notice them

I suppose there is a lot to it and you get the psycho-physics right: Our brain reconstructs the fundamentals from the overtones, hence we seem to hear bass fundamentals even from speakers that have much diminished volume at the lowest levels.

It sounds (and feels!) different, however, if the speakers really reproduce these frequencies. As you say, my speakers go to 22 Hz at -3 dB, and they really do work

In fact I have discovered a love for double bass since having them. Of course, room modes can cancel out certain frequencies more strongly, but I have a fairly large room and not having significant bass problems, I like to believe. (There is a bit of a resonance bump below 40 Hz but it should not be relevant here).

If the recording is a 4-string bass, the lowest note would be E1 at 41 Hz, or at most 31 Hz if it is a 5-stringer. I would say both are well within the capabilities of the system. I certainly haven’t heard the same weird disappearances as in this track when listening to other tracks with well engineered double bass.

There is such a sudden and marked change at 16:13 that I would attribute it to mixing, or someone hung their fur coat over the microphone or something

(And like I said, I don’t think it’s the greatest bass recording in general)

The track was at a much lower volume level to Trilogy by Corea that I had been playing before.

I can hear a distinct dip in volume at about 6:14, esp. on the right channel.

Who is actually playing on that track?

Is that Wayne Shorter on tenor sax that I can hear mainly on the left channel?

The muddiness of Lewis’ bass may partly come from the fact that Ron Carter is also playing the cello?

It’s a busy recording, and not a very good one.

(FWIW I’m not a fan of the fragmented/shattered design on the cover of the album Expansions).

Who is actually playing on that track? 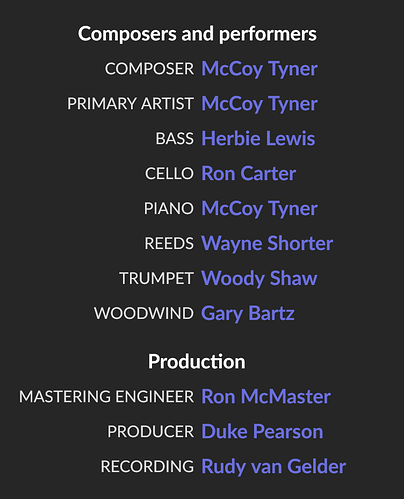 Yes, but that’s the album.

Who is playing on that track?

The album has per-track credits in Roon, this is from the credits of this track, if they are correct - they are not always (I haven’t listened to the whole thing so I don’t know if they all show up)

Are they generated by fans or from the label?

Are the credits on the various tracks on Expansions all the same?

So it is Wayne Shorter on sax (not Bartz).

On Discogs they only credit Bartz with a wooden flute on track A2.

Roon buys them from various sources, much is from Allmusic. Allmusic on the other hand gets them from a mix of sources, can be fan edits or label, I think.
Like I said quality varies, but for important albums tends to be pretty good.

The album credits and track edits in Roon are separate, the former associate with the album, the latter with the track. In this case, all tracks have the same musicians credited as the album, i.e. all of them.

However, looked it up now and his does not seem correct according to the Discogs entry. But on Visions, the personnel seems to be the one from above, minus Gary Bartz who only plays on track A2

Edit: As you say

On the back of my vinyl it has general personnnel and what they play, which includes Bartz playing alto sax and wooden flute, but there is a * next to wooden flute, and then at the bottom next to * it says “song of happiness”. So That suggests bartz plays alto sax in all the other songs. By similar logic shorter plays tenor sax in all the songs except song of happiness, in which he plays clarinet. Which would suggest that on this song bartz is playing alto and shorter is playing tenor. Edit: just reading the description on the back of the vinyl it says in the song vision that shorter, bartz, Shaw, and waits all do solos

it’s not clear to me how and when carter plays the cello (apart from when he does glissando parts earlier in the song), how it is tuned, and whether the bass is four or five string. I’m not a musician so I just hear sounds. I had googled to try and find out if Herbie Lewis was playing a 5 string, but couldn’t find out.

…and as pointed out, the bass isn’t sounding good, or isn’t sounding muchly, from around 6:13. I mentioned the section 6:13 to 6:23 more for a nice short section to focus on but the bass actually sounds similar for the remainder of the song.

Same feeling I had (btw, original thread this one!). The bass notes right before this passage are much better defined and far less mixed into the background, It doesn’t help much either that there’s two drum breaks too at the end. As if the sound engineer didn’t really like the bass player’s improv trying to outshine the sax solo? That thought actually brought back memories of the film Amadeus, where the Prince tells Mozart his piece has ‘too many notes’

someone hung their fur coat over the microphone

I think you nailed it!

On the back of my vinyl it has general personnnel and what they play, which includes Bartz playing alto sax and wooden flute, but there is a * next to wooden flute, and then at the bottom next to * it says “song of happiness”. So That suggests bartz plays alto sax in all the other songs. By similar logic shorter plays tenor sax in all the songs except song of happiness, in which he plays clarinet. Which would suggest that on this song bartz is playing alto and shorter is playing tenor. Edit: just reading the description on the back of the vinyl it says in the song vision that shorter, bartz, Shaw, and waits all do solos

This is one thing that needs sorting about streaming - basic track info (and perhaps also a really good potted summary of the music).

We would hope that the specialist app, Roon, would have this info in it, but in this case Roon’s track details had not even picked up what’s written on the album cover, and Discogs.

In this case Roon provided incorrect info, which is clearly worse than having no info at all.

I think van gelder is well known for emphasising brass and drums and de emphasising bass and piano, so it fits.

In this case Roon provided incorrect info, which is clearly worse than having no info at all.

Not to me. Without info, I would have no clue who these people are at all. The way it is, if I listened to it I would probably figure out which instruments there are.

Yes, perfection would be nice, but alas. For music that’s important to me I go through the credits and check and fix them. And - importantly - making a few edits is way better than having to type it all. Other stuff I don’t care so much about the odd error. What would be nice would be if Roon could import Discogs.

And by the way, having the album cover is not always a guarantee that the info there is correct, as I have found out when editing Roon based on the cover

Fully agree, after listening to the full track. The bass is really only ‘there’ if the drummer is taking it easy… If it wasn’t for the engineer’s preference, soundstage-wise it’s as if they were one microphone short in the studio and the bass player had to sit behind the drummer. If you like jazz drumming, it’s really a lovely track to listen to. If you can handle the ‘creative’ cello play… that freaked me out personally.