How to Connect Samsung TV to Naim amp?

Please excuse my ignorance but am looking at buying a new Samsung TV which only has optical, HDMI and USB connections - although I’ve no idea whether these are all outputs.

I want to connect to my pre-amp (552) but Naim amps don’t have optical inputs (AFAICS) and my existing set-up from a legacy Pioneer Plasma is to use the RCA outs on this, with DIN at pre-amp end.

I have a Sky HD box so could take audio direct from that in to pre-amp (RCA to DIN) and then attempt to synchro the timing with the TV but I’m unsure how this works - have never tried, plus this won’t allow TV sound through system when using SmartTV features.

Anyone with pearls of wisdom on what to do?

I’m assuming you don’t have something like a Naim DAC or Network player in your system ?

No - no DAC or anything digital, save a CD555 but playing with inputs on that would be a 'mare.

That’s a shame as it would have made things easier as you could just go optical out into one of the Toslink inputs. Nice and simple and you keep the Naim system electrically isolated from the AV kit.

You could connect with RCA>DIN from the Sky box direct to the 552 (as you suggest) but you may possibly degrade the whole system SQ this way. Give it a go with a cheap cable and see what you find.

My father purchased a little box that takes an optical in and outputs L/R RCA from a famous auction site.

Presumably it has a DAC and preamp built in.

Volume is then controlled from the hifi.

Works fine for TV and if thats all you need stop here., but if you have others digital sources that may benefit from an improved DAC , CD player ect. Then might be time to invest in a dedicated DAC.

The chap in Currys was a tad non-plussed when I said my amp didn’t have an optical input - he thought all amps with AV tags had them now.

Hooking up the Sky box direct to the 552 won’t deliver SmartTV features though - I think I need to go from TV to Pre direct to get these. I’m just checking if I can hook optical in back of Sky box - I don’t think so.

I’d go with the separate DAC option then as suggested above. Just be careful as some of the cheap ones can cause problems with noise. With a system at your level, I’d look at some of the preloved Naim options (DAC, DAC-V1, early NDX) which are either dedicated DACs or provide this functionality.

Thanks. Was just looking at these options as, as you say, putting a cheapo in the chain (which will also drag USB power from somewhere), doesn’t feel the correct solution.

Either that, or I find a TV with RCA outs for sound. I don’t really want another box

Not even an AV badged S1-pre has optical in it seems.

Yes the only Naim amp (other than the Uniti series) that had ability to do this using a built in DAC, was the original Supernait.

I have an Oppo BD-93 DVD/Bluray player which has an array of inputs and outputs.

Edit - nope, all outputs and no salient inputs (as you might expect).

Unfortunately not - just digital outputs on this unit.

Looking like a DAC then to get ‘full features’ of the TV. B7gg8r!

There are plenty of small high quality DACs that would do a good job here if you don’t want another full sized box or two on your rack. A Chord Qutest, perhaps? Optical in from the TV, RCA to DIN for the preamp.

Thanks - it does seem a tad strange/perverse though to have to buy a DAC which may end up costing more than the TV (£899 - probably less).

I’m wondering if I should explore the sound-bar route instead and if I want to hook up a Bluray etc, I can wire-up the sound direct from the Oppo in to the hi-fi - although there may be some lag to manage(?), somehow.

Got a Sky HD box , I send the TV signal to the Tv via HDMI and the audio to a little UnitiQute , which acts as a DAC and then on to my Nova which is in a different rack entirely.

Tv sound switched off. Mine is a Sky

Q box .The DAC also has signal from my Pioneer Universal Player .
It works well , especially on things like sports, the TV having two HDMI inputs.

The Sky box has an on- board DAC, but that should be bye- passed .

I’ve done it this way for around twenty years, my first DAC was a small ProJect , about £150 , best value piece of audio kit I have ever bought.

The other thing, is if you have a Sky box, try a dedicated power lead - it improves both sound and vision .
I use an Ecosse Big Orange rather than the “ kettle” lead supplied by Sky. The reason for Ecosse is they offer a power cord with a figure of eight termination.

You can buy a DAC for any price you can think of, from just a few pounds up to tens of thousands. I presumed that the object of linking the TV to your top flight Naim preamp was to get great sound quality which you probably wouldn’t have got if your TV had a DAC in it.
An £800 DAC might seem expensive compared to your TV, but it’s peanuts compared to your HiFi system. It just depends what you want from this.

Thanks (again). The DAC aspect is unexpected and has caused me to pause, as I’m switching the living/listening room around and need to prioritise in terms of how much kit, quality of sound et al. I’ve had the Pioneer plasma for c.14 years, which has HDMI ‘ins’ (from SkyHD), with RCA outs to DIN at pre-amp end - both cables ~9M IIRC.

Thanks @Ian2001 – I’m going to check my SkyHD box outputs and see if this allows digital audio out. I assume you’ve had to synch the sound via the Skybox menus?

I’ve generally found that it’s easier to get a digital output from the TV rather than other associated boxes when feeding it into a HiFi system.

I have never felt the need for synchronising the sounds, because the sound is going direct to the amp or DAC, not going anywhere near the TV

This is the system from a few years ago -it’s a mess , with a stack of wires . On the top of the (then) Blu Ray player, you can see a small silver box , for many years this was the DAC from the Sky Box and DVD/Blu Ray player. 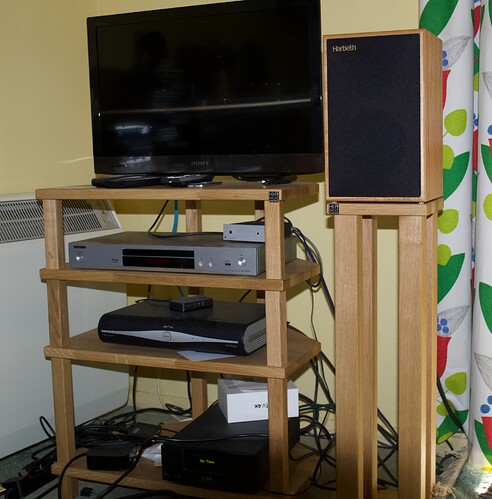 This is a Sky Q (not HD) if you are re-structuring it may be worthwhile investigating these boxes - they are very good .