Considering a speaker change to a Proac k10. What’s the thoughts on the 500dr being enough amp to properly drive them. I know @ChrisBell chose the K6 signatures. Can’t find anything on the impedance drop which on my current focal maestro utopias is like 1.8. Don’t want to “over speaker” again needing more power. I know @Thomas changed from the 500 due to this with the m2’s magico’s. Any advice would be appreciated.

Check with your own dealer, Naim, and Proac if you are still worried. I would think you would be good. There are links in your own value chain that would know and advise.

From the NAP500 literature: The NAP 500 delivers 140W per channel into 8 ohms and is capable of prolonged output into 2 ohms with no discernible impact to performance.

While the K Series speakers are 4 ohms, I personally I would not be concerned. The 500 should drive them beautifully. You could easily email the ProAc factory and ask them directly about your concerns. They’ve been responsive to my questions.

Don’t want to “over speaker” again needing more power. I know @Thomas changed from the 500 due to this with the m2’s magico’s. Any advice would be appreciated.

I understand your concern.

The impedance and the sensitivity provided by the manufacturer are information that only give a vague idea of the speaker’s needs.

In fact, the key information is impedance.

But, impedance varies with frequency. Therefore, stating that a speaker has an impedance of 4 Ohms is almost meaningless.

The key information is then the impedance curve over the spectrum: between 20Hz and 20kHz.

It is this curve that will give you the real needs of the speaker.

So you need to find, or ask the manufacturer, the impedance curve of the K10.

If we take the Magico M2 as an example, here is what is provided by the manufacturer: 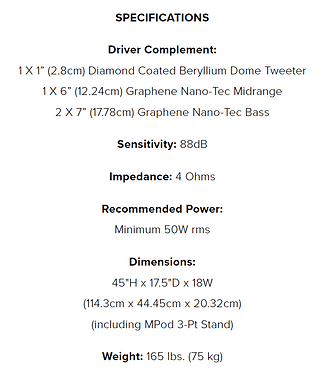 If you look at the impedance curve, you can see that even a NAP500DR would struggle.

I could have used my NAP500DR. It would have worked very well.

And I would never have known that the speakers were underpowered.

But I would never have known either the true potential of these speakers.

The reasoning is the same for amplifiers.

Stating an amplifier delivers 140 Watts doesn’t say much.
This is especially true for transformer-fed amplifiers.

But that’s another story.

Unfortunately, making a choice based on manufacturer’s information alone is not always sufficient

My advice: try to find the impedance curve of the K10 and post it here.

The potential limitation of the 500 is that being a bridged design, it is likely to be have a higher limit to low impedance than Naim’s other amps that are single ended. How much of a limitation that is, and whether over-ridden by whatever other benefits the amp has, will depend on the speaker characteristics of which in this context its lowest impedance is probably most significant.

I’ve heard a naim 45W amp better driving the same speakers than other manufacturers amps with 300W plus.
Naim WATTS are not anyone else WATTS, that’s including Soulution.
I guess the Nap 500DR would drive the K10 effortlessly.

Yea, of course. Thanks.
Doing too many things simultaneously does not always give good results. I had to correct my answer to Zack 8 times

Is there a recognised standard when it comes to " how many watts an amp delivers"?
Ive seen numerous graphs that tend to indicate a point on a graph just before the THD exceeds a certain value as being the w/ch. However, even this was subjective.
My understanding was that it is the power supplies ability to deliver clean/flat DC that is the limit.

If a 25 grand amplifier can’t drive a pair of speakers satisfactorily, there is something wrong with the design or build of either the amplifier or the speakers.

If a 25 grand amplifier can’t drive a pair of speakers satisfactorily, there is something wrong with the design or build of either the amplifier or the speakers.

I wouldn’t put it that way.

The NAP500DR is a gorgeous amplifier. I loved having it. And as I said before, if I could have kept it, I would have. But we can’ t have everything.

What a system! It drove my Magico S3 MkII perfectly. A real match!

There is no problem with the NAP500, nor with the Magico M2.

They are excellent products, each with its particularities, limitations and strengths.

Regarding the price, I don’t think it’s a relevant element.

I’m sure we can find amplifiers more expensive than the NAP500DR that deliver less current/power (like tube amplifiers).

I’m not saying it is bad, but for such an expensive piece of equipment I shouldn’t have to worry about it driving any speakers.

Naim WATTS are not anyone else WATTS,

That is rubbish, watts are watts are watts. However where the majority of amps typically claim to provide a peak power output of about twice their rated RMS power before clipping, Naim’s claimed peak power capability typically is about 5x their RMS power. With music having good dynamic range that suggests that Naim’s power amps are capable of playing music up to a similarly high average sound level as amps of up to about 2.5x the rated RMS power capacity most other manufacturers. (RMS power output is the wattage rating of amps most commonly quoted.)

Of course watts are watts, it’s a phrase. The design and implementation of an amp is so much more important than the technical specification. Naim build is so high quality, their lower ranked amps can drive almost anything. It’s crazy.

I’m not saying it is bad, but for such an expensive piece of equipment I shouldn’t have to worry about it driving any speakers.

I think it’s simply a matter of the design choices made by the manufacturer.

Class A or AB, tube or transistors, etc.

For speakers, ported or closed. One driver, or several.

All these choices induce both qualities and limitations. For example, providing a lot of power with tubes will be challenging.

The perfect amplifier, or the perfect loudspeaker, does not exist. Unfortunately.

So we have to choose and match amplifiers and speakers according to our taste. And the limitations of each component.

In my case, the match was perfect between the NAP500DR and the Magico S3 MkII.

It appears that the NAP500DR can even easely drive the Magico S5 MkII, which are large speakers.

The NAP500DR is not the most resolving amplifier. But it sounds so good. Reproduced voices and piano so well.

The two together is an outstanding combo. Gorgeous!!!

The Magico M-series needs something more muscular like the Statement.

Can you put heavy stuff in a McLaren?
Nope. It’s intended to drive fast carrying 1-2 people. It’s not a truck.
Naim higher preamps cost xx,xxx£ and don’t have bass/treble buttons, what? At that cost I would expect! Nope.
It’s the same thing here with amps and loudspeakers however for the specific question a Nap500DR will drive almost anything effortlessly.

p.s.
I’ve heard some highest Nagra monoblocks struggle to drive a pair of Wilsons whereas a modest nap300DR did the job much effortlessly, not even to mention what the 500 did…

Of course watts are watts, it’s a phrase. The design and implementation of an amp is so much more important than the technical specification.

Design and implementation indeed are all important - however so it the resultant product, which tests/specifications can indicate (though not all published data covers all specs, and tests necessarily only identify the parameters they measure). The tech spec of the completed product of course comes from the design and implementation - and Naim’s tech spec does give that info about peak power capability (arising from their design).

I think that Einstein wanted to say that Naim 80 W may be more powerful than some other brands with 200 W, because they have a lot of current.

There are many other considerations:
The way in which an amplifier clips - does it run into problems before clip? - how does it recover from clip or overload? how long does it take to recover? how sensitive is the amplifier (or its power supply) to the impedance of the speakers? One can go on for a long, long time on such subjects. It is not, however, just a question of watts - they may be useful to
describe the heating effect of an electric heater but not much use to describe the performance of an audio power amp.

The average power for ‘normal’ (loudish)
listening is about 1 - 2 watts. It is the peaks which require the higher output and even this can be seriously ameliorated by careful treatment of the overload characteristics of the power amp.
This is why in practice one can play ‘rather loud’ with a small power Naim.

Smarter people than me wrote these things… and it’s true in my experience.