I have an iPhone 7 and have noticed thar after recent updates that the phone is using a substantial amount of power when switched off.

It uses about 4% per hour when on (I can live with that) and the same when powered off using the slider switch. All the battery parameters in settings show the battery is good with 98% max capacity and running at peak performance. None of my apps show any signs of excessive battery consumption in the settings battery screen.

I have tried numerous resets including DFU, innumerable settings options and various other tweaks and nothing works. Many online suggestions have been tried including the music app issue.

I had an online session with Apple and after an hour they suggested I get genius appointment at my local store as the couldn’t see anything wrong. You guessed it, that was a waste of time as well. Their only suggestion was to PX the phone for a later model.

Check to see that background app refresh is switched off, this munches battery life, it may have defaulted. Also worth resetting phone by switching off and switch back on whilst also holding down home button

Done and no difference.

If you have a mac of some sort coconut battery can be helpful (correction, and windows)

We used it to get apple to do something with our daughters 8 as the phone said it was OK, it wasn’t . They agreed to replace the battery for 40 quid. They are far from genius’s 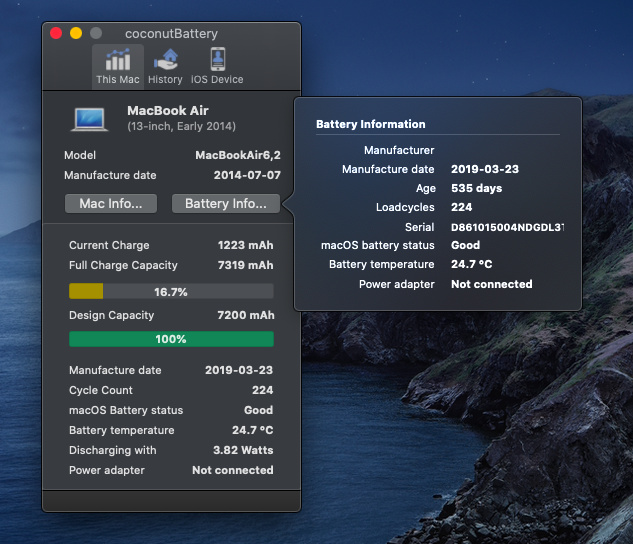 I know its an Air but the phone diagnostics is similar. You can see its an older MacBook but i replaced the battery last year 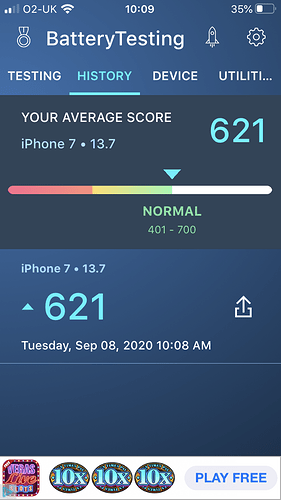 Even with an iPhone 11 Pro, I sometimes encounter unusually high overnight battery usage (80%+) - normally though a charge lasts for a few days on this phone.

If you check ‘battery’ under settings, you’ll see which apps are sipping the juice the most - in my case, it was Siri (using nearly all that 80%), and after turning it off, all was OK. iOS update to 13.7 and a full power cycle seem to have also helped, and Siri is now back on (needed for CarPlay), with no overnight ‘sucking the battery dry’.

I had an iPhone 7, and never had any issues with it, however batteries do lose efficiency with time.

Hope you find a resolution to the problem.

I found that mConnectLite - the app I use to stream local content - does drain the battery. I have a feeling that it is not just that app, but any app loading external Ad’s.

Beg your pardon, thought there was a windows version too!

There is a good chance the battery is on its way out as the phones is around four years old. They’re easy to replace yourself check out ifixit for instructions and parts. The only other suggestion I have is to ensure you are always running the most recent version of the iOS software as this can alleviate some issues.

Thanks for the replies so far.
I have taken so e of the suggestions on board and will investigate further.
I will try to clarify …
The phone uses around 4% per hour when powered ON. That seems OK to me. What I dont understand is that it uses around 4% when powered OFF.
It appears (although I can’t confirm) that some processes are continuing and the phone isnt shutting down completely. I understand that the phone will use some power when off but the 4% is excessive by anyones reckoning.
I’m pretty sure theres nothing wrong with the battery. If there was then power consumption would (should) be higher when ON than OFF but its consistent throughout.

I think the phone re-indexes after each update which uses additional power and may take place when the phone is ‘off’.

My investigations say the same but how long is that expected to take?

When the iPhone is off, there should be no battery drain at all. So either it’s not turning off, in which case a hard reset should fix it, or more likely the battery has a fault and an internal current leakage is draining it while off.

If it were me I would get a new battery fitted. No doubt you could do it yourself, but again if it were me I would take the phone to the local “iPhone doctor” and wait for ten minutes while he did it. I reckon (from recent experience on my wife’s iPhone 7) it would be about £50 including a 3 month guarantee.

I had a new battery fitted to my 4 year old 6s and it’s like new now, cost about €40. Even Apple themselves don’t charge much anymore

First thing to say is that there was a known battery issue with the 7. Of all recent models it was very much on the worse side of things and one of the worst iPhones of that era for battery expiry at pace.

Thirdly, in general when off you can expect anything around 3% loss to be okay. Anything more and it’s a dying battery.

Taken overall, it’s a dying battery. The merits of a replacement battery for something like a 7 are at best debatable. The 98% suggests you’re fine. Apple suggest anything below 88/90% and your battery is dying but I’ve seen phones in the 90s when the battery is definitely dying. However, the thing to consider, which you haven’t mentioned, is whether you’re charging using original Apple cables and whether your 7 is an original or a refurb.

Non Apple cables can overwhelm a resistor which, once it’s gone, will cause all future batteries to degrade at a similar pace. Refurbed iPhones are often great value but unless the whole PCB on which the resistor lives has a reason to be replaced (and it rarely does) then the same problem occurs repeatedly.

My iPad Pro battery for the 1st 12 months of use could be used continually for 6 hours and not lose 5%. Then my wife charged it using a non Apple cable and a non Apple charger. Only took the one charge. Over the next month it started to lose closer to 5% per hour.

After various issues it was replaced with a refurb with an allegedly brand new battery. The refurb never once hit 6 hours and 5%. It started at 5% per hour. At I resent the 3 hours I will spend on it tonight will easily cost 10% per hour. Stripped it down and sure enough. That circuit and that resistor.

This may be irrelevant, but being in a weak cellular signal can drain the battery fast

When the phone is switched off? I very much doubt it.

When the phone is switched off? I very much doubt it.

Do you mean completely powered down? Otherwise it constantly checks and searches for a signal so people can ring you…

I have a iPhone 6s Plus for 4 years now. Loved it at the start because it has a large battery so phone would last 2 days easily with use. Over the last couple of months it was horrible and won’t hold much charge anymore and finally went into restart loop several times.

I live in Australia and I thought it would cost hundreds to replace the battery because that’s what it cost to replace the screen. Then I discovered it “only” costs AUD79! I am now hitting myself for not doing it earlier. New iPhone 11 Pro price starts from AUD1749 so AUD79 is a small fraction. And I am not talking about some after market shopping centre booth that does screen repair. AUD79 is the price from Apple at authorised Apple store.

It is £49 according to https://support.apple.com/en-gb/iphone/repair/service/battery-power.
Definitely an option worthwhile considering.

Beware, while it didn’t happen to me, battery replacement might damage screen protector if you have one on it.

Yes. Powered off with the slider switch.