Is your dealer on here, and still going strong? 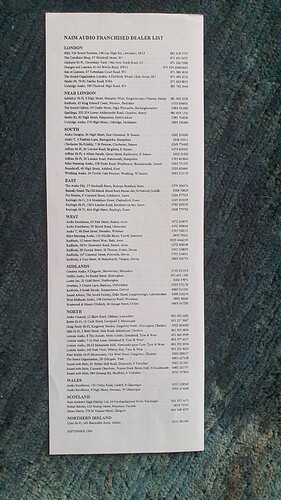 Yes.
No.3 on the list.
And, as noted on another thread in the last few days, same wonderful people.

Not been called Jeffies Brighton for a few years but as Audio-T still doing a wonderful job with Linn and Naim with wonderful stuff.

Mine is on there, still in business, and still at the same address with the same name!

Sold me my first LP12 and my first serious amplifier - Exposure 6/7/8 against Naim!

South, Westbourne branch of Mike Manning went a long time ago. Don’t know in between, but its now a japanese restaurant.

Nothing, apparently, in Salisbury then, and definitely nothing now, but there used to be Salisbury hifi that had some connection with Movement Audio Moordown and Parkstone, both also gone.

Phonography Ringwood is not on that list, but is now a “velo” as in bicycle cafe (or was a year ago). Phil ex Phonography is still about, plays table tennis (or did) and I bumped into him at Bristol show 2020. I think he moved the business at some point to Winchester, and it’s now Winchester hifi.

No. Creative Audio closed a couple of years ago.

Another dealer has now opened in the same premises, selling the Muso range and I think the Uniti range too, along with other brands.

Blimey, that list must be from the early 1990s?

I have moved around alot so have used many of them over the years.

Pro Musica closed down in the mid 1990s. I have bumped into the owner Chris at a hifi show selling vinyl a few years ago. Bought a Nait 3 from him.

As has already been mentioned Basically Sound is still around although they have moved and changed ownership. Bought some Rega Ela 2 from them when they were at the Old School House.

The Cornflake shop also still about although they focus on home automation, home cinemas etc. Bought a Rega Ear from them in the day.

Billy Vee still there and as far as I am aware same owner. Infidelity also still about. They were great when I lived near them. Bought a CD5 and a 180 off them. Sadly Son et Lumiere closed down quite a long time ago though (late 90s/early 00s).

The list is dated 1994.
The other side is a price list. I think someone else showed a month or so back. But happy to turn it over for some memories!

Mine is - Grahams Hi Fi.

My other, Sound Organisation, moved from Pickfords Wharf years ago… to Gillygate, York. Both addresses still on the list!

Jefferies is now part of Audio-T and the Brighton Store is still going.

Rayleigh hifi are also still about. I listened to some speakers at the Rayleigh branch only a few years ago.

My first step into Naim was at Westwood & Masons in 1990, which has now gone.

I had previously been sorely tempted by some chrome bumper kit at Studio 99 (now gone too) when I helped a friend audition and buy his Rega Planar 3.

My LP12 was serviced at Listen Inn (also gone) by Peter who is now at Cymbiosis.

Not sure who are still around but from the 80’s I recognise Studio 99, Billy V and Grahams hifi, plus my local dealer in St Albans, Listen Inn.

Same here. Father had a Dual NAD AR speaker setup so thought I knew what was pretty good. Radfords had an upstairs listening room. Some guy said it’s being swapped around for a demo, go take a look.

Not sure about The Auditorium being a Naim dealer. Derek (RIP) ex of Sound Org worked there. I bought a Rega Planet CD from them. They weren’t there long though.

Well my old dealer Rayleigh hifi is, but Signals my current dealer is not. Though they started in 1993, so may not have been a Naim dealer then.