Isolation feets under your boxes?

We all know Naim is on the extreme when it comes to reduce vibrations/microphonics. Therefore I’m interested in if you use better than original isolation feets under your Naim boxes and if so what do you use and with what results? I’ve currently placed my boxes on cheap Sonic Design pads I had on hand which I’ve painted black and it feels better but haven’t done any AB testing yet

I use Quadraspire reference pads under my NDX2 and 282. Very good but quite expensive.

Quadraspire Q-plus evo under a UQ2.

One thing I have noticed, is that putting isolation feed under gear (any gear) looks bloody awful. Luckily my UQ2 is out of site under the desk. I’d never put feet under something already on a rack. Even if the improvement was staggering. It is just such an unsightly warping of proportions.

I’ve got some sorbothane feet from many years back that I use under my Nova. Not sure if it does anything for the sound, but at least it allows airflow under and over, which can’t be a bad thing.

I am now using IsoAcoustics IsoPuck Mini under my P8 and CDP.

Seem to work well with no detriment to sound quality compared to my previous isolation of a marble plinth with Stands Unique brass/carbon isolators but these allow easy cleaning underneath, remove all vibration from the floor through the rack/equipment and also further deaden the glass shelves too. 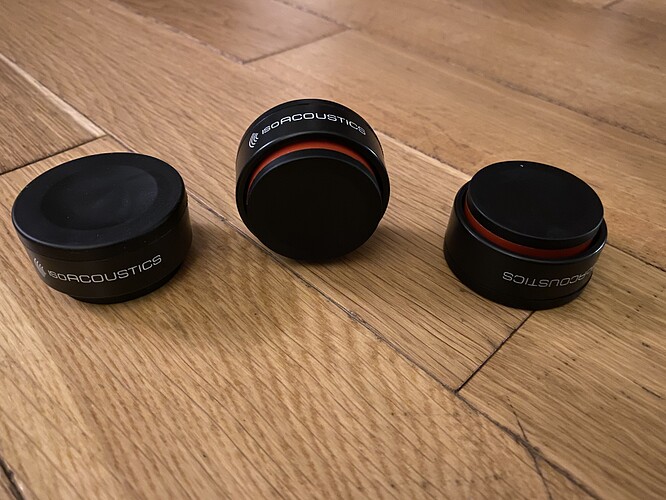 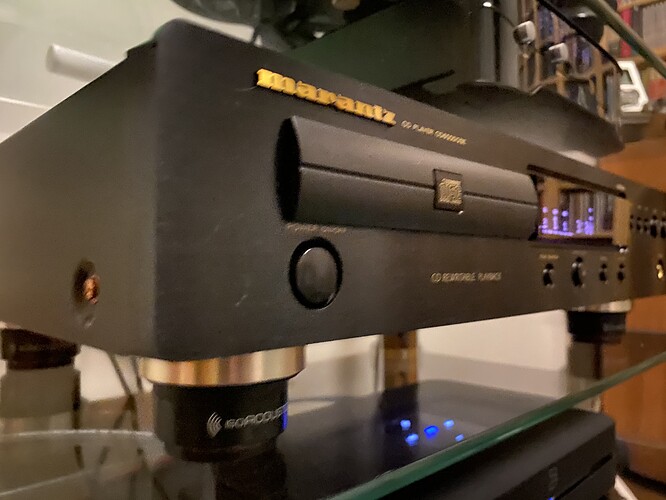 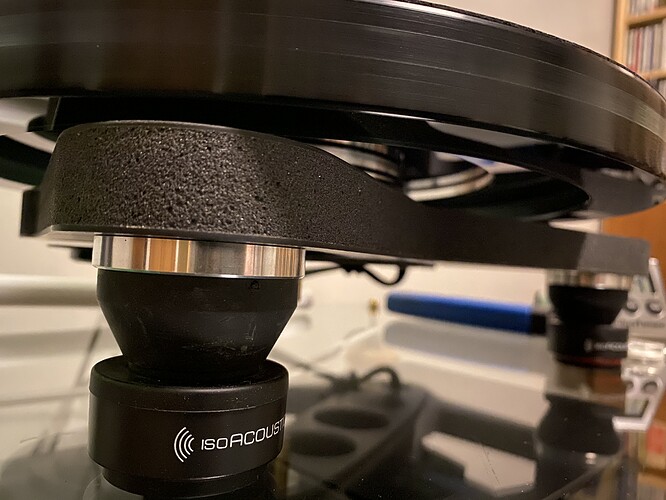 The setup can become a bit wobbly stacking feets I assume.

My rack is Quadraspire Sunuko-Vent. I use Quadraspire QPlus Reference under the 500DR head unit and its PSU, 552DR head unit, and 555DRPS for the CD555 (the CD555 and 552DR PSU sit on the top of the ‘brain’ and ‘brawn’ racks where I have double shelves using the bronze spike upgrades). I started with one set of QPlus Ref, initially under the 552 head unit, and by trial and error found they delivered an improvement on every box. The greatest benefit seemed to be with PSUs. Expensive, yes, but not in proportion to the cost of the black boxes.

That’s an odd comment: they work well with no detriment to sound quality. Surely they should make it categorically better or they serve no useful purpose. The Rega certainly looks very odd perched on top of them.

I had them already on an isolation platform with Stands Unique isolators under them - I will edit my original comment.

The reason I mention no detriment is that some isolation does affect the sound in a negative way whilst isolating.

And that is what isoAcoustics recommends as well.

ISO Pucks are only sold in pairs.

Using 4 under the stock feet should be fine - depending on how they are doing the job.
If they have a composite sandwich of hard and soft. They are best under the chassis using just 3.

I have had isoacoustic orea under some of my gear for quite some time, they can be very good if you load them correctly, to little and they can sap bass, to much and they dont do anything, so getting them right is not straightforward really and i found it was quite a bit of trial and error.
I had them mainly under my digital gear and phono stage, but since getting a full fraim stack, i have removed them, as i couldn’t really tell any difference at all.
So much so, i have just purchased another shelf, so i can now have my dCS clock on one shelf and the rossini on its own shelf, where as before i had them stacked, with orea under both, guess what it sounds better now.
This could be for many reasons, but if you have a full fraim, i dont think you need them, plus as i said you really need to be careful how you use these, placement is every thing, as most bits of gear are heavier in certain points, compared to others, so you really need to get them right, as its easy to overload just one.
Sometimes it works, other times it doesn’t, but as said i dont miss them at all, now i have the fraim

I have now these days getting to believe that the gear should be installed as the makers intended.
Alterations could deviate from the designers intentions of how something is meant to operate.
Fine, if some brands actively endorse other additions - how many times have you read about stillpoints being used ?
Others stick stoically to the tried and tested.
My Karan amp uses Soundcare superfeet. An encapsulated spiked arrangement- but they have a felt patch stuck on the bottom. I contacted the company and asked why they are shipped with the felt bottom - when it seems to contradict all reasoning behind going to such effort of isolation.
The response was that it was thought to have sounded better when first designing with the felt attached.
These isolation devices will make a change, although you will need to trust your own ears as to whether they make something better or different.

Many many brands have to consider cost and mass consumer market. There’s nothing like “no compromise”. They need to do compromises whatever they tell you to make it work for the masses and those compromises are hidden in a marketing language to make their decision look valid. In doing such compromises there are things that you can tweak to get the last % out of a product. However you will most likely never hear such recommendations from the manufacturer themselves because that would make their decisions non valid in like “I pay 10 000 GBP for this and you put on crappy feets?” In many cases things as design is chosen prior to sound quality…

You then need to do the “math”.
Is it worth me to spend an additional extra x amount to get an extra x percentage ?
Or put that towards something else perhaps to get a bigger unadulterated percent increase ?

I bought a glass shelf from local glass merchant and some Atacama gel feet (also marketed as door stoppers!) and tried them under my pre amp to start with. I was sceptical but there was a surprising improvement in clarity, quieter backgrounds, better separation.

So ended up buying more glass shelves and worked really well. Cost me £40 per shelf plus about a tenner for the gel feet. 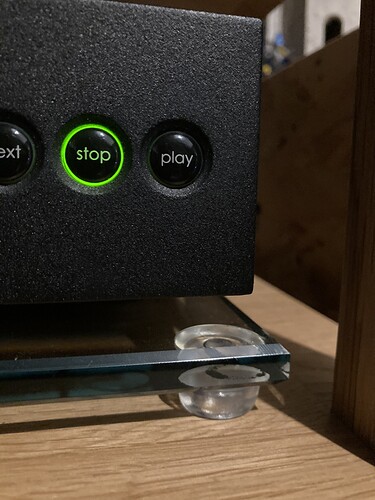 I use a set of four isoPUCK Mini under my Uniti Atom, but not under the feet; rather, under the chassis itself.

HRM (Harmonic Resolution Systems) is an alternative to isoAcoustics. I use the HRS Nimbus pucks between the top of my Fraim and a platform that supports an isoAcoustics Delos for my turntable. They sounded a bit better in that particular use case than using the isoAcoustics pucks.