Hi all I’ve an lp12 with Akito, cirkus, adikt cartridge & currently with Valhalla - I’ve a lot of 45rpm records both 12s, 45s and lp too. The changing of the pulley is laborious so doesn’t happen I’m using my other system for 45s.
Considering an external power supply to power the lp12… Interested to know peoples thoughts and experience with lingo 1, Hercules or whether I should stick with Valhalla. All my units 180, 102, Hicap and Valhalla have just been serviced by Class A. I’ve an itch I’m scratching here partially due to speed selection option but also possible improvement is SQ/ performance. I cannot stretch to a lingo 4 currently, or any more expensive solution - of which I know are out there. I’ve read that the 1,2& 3 are very similar. I’d also look to get it serviced if not already done. There’s a couple out there at moment. Be great to hear from those more in the know! Cheers mal

If you buy an L1 then you’ll need to get the mains filter removed (assuming it’s not been removed already) since you’re using it with Naim amps. Darran at Class A can do this for you, assuming you’re UK-based.

I have a Class A serviced L1 from 1998+ and an L2 from 2006+. They sound slightly different. L1 is a bit more groovy and a bit closer in spirit to the Valhalla. L2 is clearer and more tuneful. L3 is supposed to a more noticeable step forward in clarity but not compared.

I was in the same place, not long ago - having a Valhalla. I had the 45rpm adaptor but almost never used it. I changed as more of an upgrade. I got a pre-loved Lingo Mk1, from a Linn dealer (£350) - and had it serviced and mains inlet swapped at Class A (£145 total).

Was that removing the filtered inlet on the Lingo 1 Ian ?

What is the supposed effect of the Lingo 1’s input filter with regard to Naim amps?

Just opened up my Lingo 1 and it has this filter. But I can’t say I’ve noticed any detriment to SQ when it is in use.

Interesting that the mains filter must be removed. I would think that was part of the design of the Lingo providing clean power to the LP12 motor. How prevalent is a mains filter in other Linn products. Does it exist on later iterations of the Lingo?

Lingo and CD12 are the only ones I’ve heard mention of.

Lingo 2 onwards are not a problem.

This issue obviously goes back a bit…

I have not delved into the whys, but when we were first forced to look
in detail at the EMC regs and the effects on our designs, we found
that the easy way to solve the mains borne interference was to use a
mains filter. However the effect on the sound quality was disasterous,
so we had to solve the problem at the source(s) inside the equipment.

A filter in one piece of equipment appears (electrically) across the
mains supply to the whole system.

As I have said before, the simple fact of plugging in a Lingo (or more
obviously) a CD12, one can clearly hear a degradation of the overall
musical performance - (not using either of those components).

In your system, one is discussing several choices which have obvious
contra-indications. The Lingo has the filter, the Valhalla is very
noisy, the Ekos is a gimbelled arm . . . (I have no home experience of
any of these products for at least ten years, but I do get to hear
them in the factory and at dealer’s)

Just a little re-cap, it is the mains input filter in the lingo that
seems to cause the problem, since it is not just enough to turn it
off, it needs to be unplugged. This also applies to the CD12 to a
greater extent - the difference here is quite shocking. julian

Gordon Fraser wrote: We use two separate spurs. Power amps get
plugged in to one feed and power supplies in to another. This has been
found by others (including us at Naim) to be a very poor idea - the
whole system should be run from one spur.

The only exception to this is (maybe) plugging a lingo into a another
spur due to its effect on the rest of the system.

Hmmm, well on a very quick 5 minute test, I could detect no difference in SQ whether the lingo was powered up, powered down, or unplugged from the mains.

Here’s an image of a Lingo 3. Is there not a mains filter there? 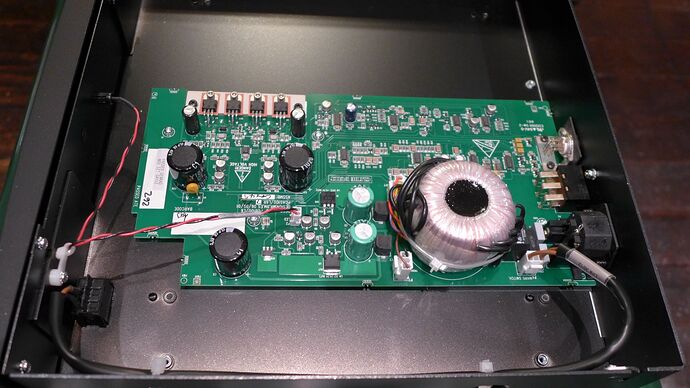 Interesting - wonder if some Naim kit is more susceptible than others…

The filter in question is a long (inch and a half ish) silver job. A bit like this (although the one in the Lingo is incorporated in a block). 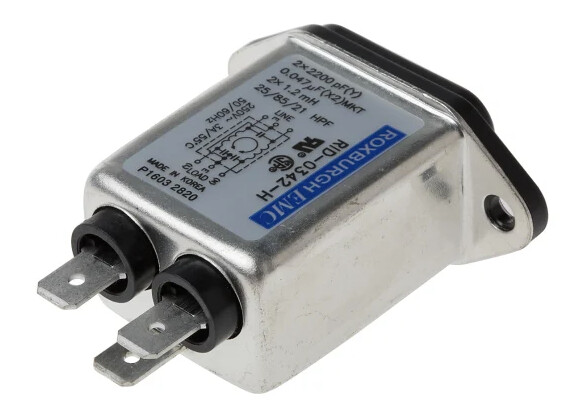 They’ve been around for decades - I was using them in mid to late 70’s when designing test boxes.

Was that removing the filtered inlet on the Lingo 1 Ian ?

A ‘filter free’ mains inlet was fitted - to replace the original filtered inlet - which had actually had its filter ‘hacked’ out (literally - and was not really safe). The cost split was £85 service, £60 mains inlet.

Think this just affects Lingo MK1’s…? Although early Lingo Mk2’s are near identical to the Mk1 - later MK2’s ones differed significantly - I understand… (there is a good history of the various Linn PS’s on a well know nr. Leicester based dealers site.)

Most of my kit is Olive, so would have been right in Julian’s time. More testing needed I think (fuelled by appropriate libations naturally).

One easy thing that I will do is move the Lingo from the main spur to the secondary spur.

Think this just affects Lingo MK1’s…? Although early Lingo Mk2’s are near identical to the Mk1 - later MK2’s ones differed significantly

I only know this from the Linn PS History, on Cym…

The Lingo Mk2 change was to a SMD based PCB, I think…?

I started off my LP12 journey with a Hercules, one of the internal ones which was part of the build my dealer recommended. Chatting about the PSU upgrade path his recommendation was to leapfrog all the Lingos to the 4 as a minimum which I subsequently did a couple of years later. I must admit I was a bit disappointed, didn’t deliver the shock and awe I’d hoped for - that came a year later when I went to Radikal. So, the point of this is that based on my own comparison of a Hercules to a L4, the former would appear to punch above it’s weight, only my ears though…

My Lingo 1 brought a degredation to my Naim system that I hadn’t realised was there until highlighted by Darran. Darran then applied the fix

Doesn’t mention anything regarding the mains filter or it’s lack of it post Lingo 1. My thinking is that it was part of the design to clean up the mains presented to the Lingo.

“The LinnLingo 2 is identified by the fact that it’s housed in Linn’s LK-sized box and, although the very first Lingo 2s employed the same circuit board as the Lingo 1, the vast majority of Lingo 2s have an improved surface-mount component board inside. This was introduced very shortly after the Lingo 2 was brought into circulation. As with the Linn Valhalla, second-hand Lingo 1s and 2s represent great value for money when upgrading or starting with an Sondek LP12 on a budget. Please ask for details on second-hand units as we very frequently have traded-in units from owners who are upgrading to a Radikal power supply and DC motor (as detailed above).”

My Lingo 1 brought a degradation to my Naim system

My Mk1 did not - as its filter had been chopped out…