Just moved into a new house with a rectangular room of 3.2 x 6.2 m with a bay window at one end.

Hifi will be going in next week some time and I’ll be trying out different locations for the speakers. Anyone any preferences/experiences of long wall vs short wall placement?

Not sure about a general rule. I was at someone’s house last year and they were firing down the length of the room (not a very big room, and 3 settees in it - hardly suitable, really). I suggested that they fire across the room, which they did and they are very pleased with the improvement. Some of that, though, will have come from the fact that the speakers are now pretty fully exposed, rather than tucked behind sofas.

I had a similar dilemma when redecorating our living room which also doubles as my listening space. Tried various layouts and the best by far was to fire across the room. It allowed good separation between the speakers and a perfect equilateral triangle to the listening position.

This flies in the face of most of the recommendations I had at the time which was to fire from the back wall towards the bay window.

Everyone’s room/equipment interaction will be different so I’d suggest lots of experimentation before deciding.

I do not have that shape of room, but i have noticed that @PeterR fires his speakers down the length of the room and has been meticulous with his set up. If i were starting again that would be where i would start.

Without knowing the layout of your room, it is difficult to say. However, the last two houses that I have lived in are configured with a lounge dinner. The current one is approximately 3.75 meters wide and 8 meters long. The lounge area is separated from the dining room by an open arch. I have tried placing the speakers across the narrower dimension and found that they lacked focus with a weaker the bass. This may be because it was difficult to get some space behind them and a shorter wavelength restricted by the rear wall being closer. When placing the speakers at the end of the room with the front window behind the sound was much improved. Although I now must move one of the armchairs to get the optimum listening position. Small price to pay for better sound in my opinion.

With that narrow a room it is difficult: Firing across room problematic at least unless you have heavy treatment on both long walls to be able to sit so close, and of course depending on whether speakers are good right up against the wall, while down length of room risks significant early side reflections unless heavy treatment in those positions.

It depends. Long wall is generally better because it minimizes side reflections, but it’s only simple if the short wall is not so short that you don’t have any distance to the back wall. (Ideally at least 0.9 meters. Edit: What you really want is that the reflected sound from the back wall has a 1.7 times longer travel time to your ears than the direct sound from the speakers, but if the speaker-ear distance is ~2.6m then this is achieved by 0.9m distance from ear to back wall)

On the other hand, placing them against a short short wall can mean that they are in the corners and/or very close together.

It’s best if all walls are long

If not it’s best to try everything, one particular placement may work clearly best and often does. Wall materials also play a role.

Short walls just 3.2 meters is not going to be easy either way. I would probably go for speakers at long wall and more of a near field setup

I don’t understand why builders don’t build houses with proper listening rooms. And decent workshops. Surely these are basic requirements?

A healthy and happy New Year to you Gazza

Same to you Peter👍

Indeed, one would think so

We have a very similar size room just slightly wider at 3.5m with a bay, at the moment the speakers fire down the long length towards the bay window, which with furniture placement and the fact it is our main lounge has been the best compromise.

The best for sound quality meant firing the other way round with the speakers at the bay end placed about 1m into the room and about .75m in from the side walls. This gave the best sound stage and I really enjoyed it but due to furniture and room layout it wasn’t expectable with all parties! Hence we had to go back to firing down towards the bay.

Couldn’t get my system to work playing across the room but I think a lot depends on your choice of speaker as well, I use PMC which seem more tolerant of being placed in maybe not ideal positions. Hope this maybe of some use.

My main listening room, also the tv room, has a bay window behind my listening position, which is 2/3 along a long wall. This set up came about because I moved the hardware into the stairwell that leads off the opposite long wall. Prior to this my system was on a short wall either side of a fireplace.

My dealer’s advice was to try the long wall setup. The short walls are about 4 m, the long about 6 m. The set up works for me because there are three doors, two windows and a fireplace, plus one of the short walls is not parallel to the other. And the ceiling is low. This means that reflections are erratic and standing waves are minimal.

The two listening positions are off centre, so the brain has to work hard to resolve the sound image - but that is what the brain is for - complex computations.

Just had a refurb here (a long process due to supply chain issues, and curtains still not arrived) which enabled me to get rid of a rarely used dining room to accommodate a listening/ morning room. In doing so I moved the speakers from the long wall (8 metres), either side of the fire to a short wall (3.8 metres).

This is a big improvement for me as with the speakers at the side of the fire they had to be close to the wall behind them, with my listening position right up against the opposite wall which I found led to unruly bass. In their new position they are further into the room, and a reasonable distance from the corners, and despite being further into the room than they were previously I don’t think they dominate the space. (I know the sideboard probably doesn’t do me any favours, but real world compromises apply).

Pictures may help, so here are some. 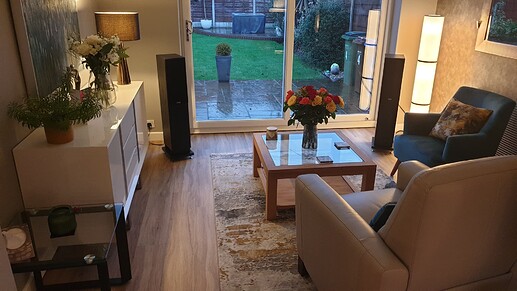 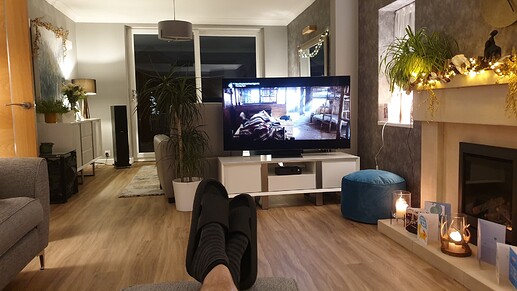 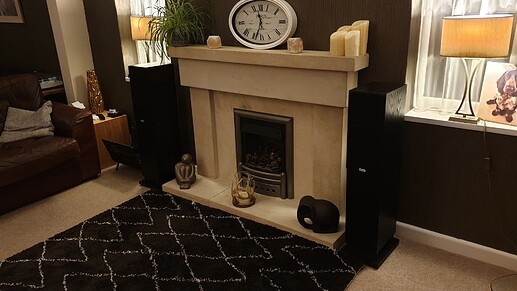 My room measurements are probably similar to yours, and mine are on the long wall. I’ve not tried the other way, but in my room layout, it means “The Point Of First Reflection” is basically the two windows, and as my main listening is at night with curtains pulled, that reflection is stopped. Video short below describes it well. Mine is very basic setup, and you can go into so much detail here if you choose. 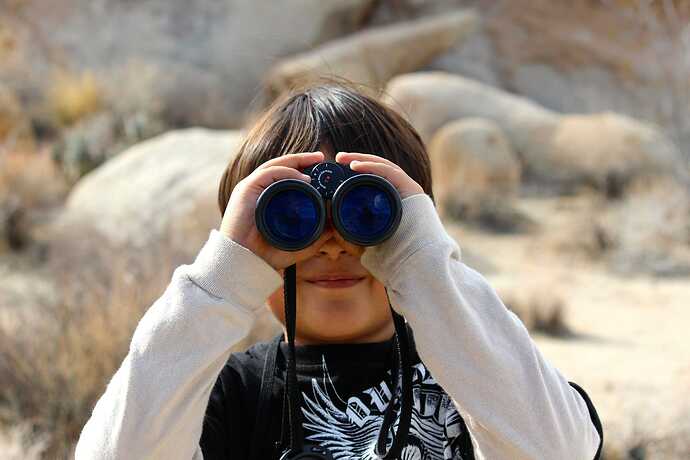 mine are on the long wall. I’ve not tried the other way, but in my room layout, it means “The Point Of First Reflection” is basically the two windows, and as my main listening is at night with curtains pulled, that reflection is stopped.

Ditto, same for me.

I had to move speakers so that sweet spot is in the centre of the long wall.

Also keep my listening chair way out into the room for equilateral triangle with ears and tweeters.

The OP didn’t say what speakers were being used, or whether the room was a listening room with no other purpose.

If the speakers need to be away from a wall and the listening position ideally away from the opposite wall then achieving this across 3.2 metres is almost impossible if achieving domestic harmony is also a requirement.

Night and day difference for me. I just couldn’t get any decent bass with the speakers along the short wall.

Listening to Parov Stelar - The art of sampling and the bass is hard hitting from my very very budget Q Acoustics 3030i.

I’m using some PMC twenty5 22 speakers so transmission line standmounts, have been happy close to the wall before.

The room is our living room, so will need to accommodate a Tv and soundbar somewhere, but Hi-Fi is the priority for both me and my other half.

Some great replies here and food for thought. One thing I’m picking up is that the short wall will allow me to get a bit more space behind the speakers so possibly more depth to the soundstage, but then I’ll have reflections to deal with. On the long wall speakers will be closer to the wall but without so many issues with reflections. So I guess a trade off between soundstage width and depth.