Just thinking about a cart change.
The only possible issue, is the correct 7 mm bolt to cart tip gap. The Helikon SL comes in at 7.8 mm (which is very close, where the Kelos SL is 9.5mm which is not. I read that 7 to 10 mm on the Aro is within tolerance. I just can’t get my ocd around how could the tolerance be so generous when tone arm setup is a precise science.
Also the prefix K, is it a good match for the Kelos SL?
Cheers for any wisdom.

7.5mm is actually the correct measurement. If you want to get it perfect with a Lyra cartridge, you’d buy a Kandid.

By the way, I think the 7-10 range you’re quoting is actually based on the “adjustability” of the original LP12 subchassis + armboard arrangement, where there was a bit of play in the interface that you could use to try and get correct alignment… which was always a bonkers notion, if you ask me.

With an Aro you either use one of two current production cartridges (AFAIK) that have the exact correct distance (the Kandid and the Denon DL-103) or you believe Naim’s claim that the additional rigidity more than compensates for the tracing error you get from the wrong geometry.

Plenty of people run cartridges outside the 7.5mm stylus-to-mounting hole distance with the Aro and are happy with it. I certainly ran a few different ones (in addition to both of the “right” ones as well) and they all did perform nicely.

I eventually moved on from the Aro not for that reason.

Kandid would be lovely but at 2x the price of the Kelos SL. Something to aim for maybe. Thank you that has enlightened me.

IIRC the SL variants were made with lower output at the behest of Chris Koster (NANA) to be an ideal match with the Prefix.

I forgot about it last night, but another one with the correct distance is the Krystal.

Thanks, the Krystal is a little bit cheaper again. I guess that’s the short list with my budget. I’m aware of the lyra sound signature to a point, l’ve never herd a linn cart before so I guess that’s going to be hit and miss. Probably zero chance of been able to demo either of them. Can’t say for sure right now but if I can’t demo them I might just have to go on the geometry factor, Linn’s spot on and Lyra is a spot off.
Nobody in our local industry seems to want to give an opinion on the Lyra Kelso geometry on a Aro, would be nice to get a bit of reassurance that the lyra will work fine particularly if I’m buying it. Cartridge selection really does suck I thought this was supposed to be a fun.

Don’t get frustrated, I have had both the Krystal and now the kandid, with a Chris West prefix K recapped and z foil upgrade. Both a very nice carts, but that kandid does do the Aro justice, and visa versa. There are preowned Kandid demos out there at a decent price. You won’t be disappointed by either Linn cartridge though.

I’m aware of the lyra sound signature to a point, l’ve never herd a linn cart before so I guess that’s going to be hit and miss.

The Kandid is definitely a Lyra-sounding cartridge (unsurprisingly). The Krystal I’m afraid I haven’t heard.

On your other question, if it’s any indication, Cymbiosis conducts demos with Aro arm tops with any cartridges they have, and it’s a long list, including most of the Lyra range. I chose my AT in one such comparison, and that one was also not the correct geometry.

Thank you, that is very interesting information.

Thank you, Guess I’m learning as I go. The Kelos SL is a very good deal and the obvious upgrade replacement for a Helikon SL.
First with the head and then the heart…

Tap « aro love » on google, Kleos aro …
Here someone using it with his Aro. 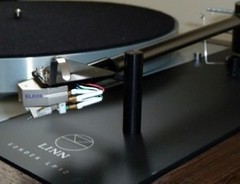 Kleso SL on its way!!
Cheers to Real music Company NZ and Mr Stig from Lyra🙏

Kleos non SL delivered tomorrow, with a P10. We will both enjoy the Kleos

I run a Kleos SL (#001) on my ARO with Superline/Supercap. Much better synergy with the Naim Superline than the standard Kleos (which replaced a Helikon SL).

Kleso SL installed today, what a wonderful thing to be had! From the get go wow wow wow. It’s a much more relaxed and effortless sound, the sl2 speakers are just flowing like silky smooth mist over hills. My prefix hasn’t had it so good…. Finally my system is really singing, I mean like it has never before

How’s it going for you?

Not burned in yet, but promising. Only 10 hours. I had the Delos before, but on Rega Rp10.
I would say the sound is more dynamic and also more neutral, but probably due to the P10, not the cart. There’s more authority, better bass.
Too soon to have more impressions, as I am running it with a same lp. Have heard only 2 different lps. I prefer to rediscover all my lps when the cart will be more burned. I prefer to be patient.
But no coins really, just a little bit hardness or brightness sometimes….which is normal for a new cart.