Well today the Melco D100 came for me to try out, heard great things about it and as I now have a different Melco it did make me think if I could get better quality re ripping them onto the new Melco, rather than the file transfer I did.
Also now having a DCS Rossini player & clock, I did prefer the cd player over the same ripped disc, it had a nicer sound and more air around it all.
So paul at Hifi lounge kindly lent me his D100 to finally see what it’s all about and if a fancy disc drive really does make a difference.
Let the dual begin, I will report back later

The testing is still going on, but one strange thing to report is how much longer it takes to rip over the buffalo.
Also the first cd, every track shows as being one second longer ?
Next cd, 4 tracks a second longer, the rest the same.

Right going to do some serious listening now

@Darkebear has it too. He could perhaps explain why there is 1 second more.
Maybe one day I will buy it too. Curious on it …

Well been really listening just to 2 albums so far as that’s all I have re ripped.
Well it’s very close between them and you will probably have guessed, as most would say a RIP is a rip, what can be different, right?
Well the easiest way I can describe the difference is the tracks so far that have been ripped on the very cold D100 ( dont know if it needs to warm) definitely sound different, it’s not massively different and to be fair I think you are going to have to have a very revealing system to hear it, but it does sound like it has a bit more slam, punch to it and a bit more air around notes, if that makes sense.
Its early days so far and going to leave it over night to warm up more and try again, but I am certain that a small difference is applied.
At the moment I am not thinking, I need to re rip all my CD’s, I will probably re rip just the main ones I always turn too and leave the rest and right now for me I am glad I haven’t shelled out £1099 for one. But as I said its early days yet and will see what tomorrow brings once it had more time to warm up

Just a question: when a cd is ripped, it’s automatically stored on your Melco n1z?

Just to add, switched to headphones just now and with sennheiser hd800s, headline2 and hicap. It’s slightly more apparent, but it’s how I tried to explain above.
Still not a massive difference and one you really need to be listening out for as it’s not a straight forward " o yes that’s different " way, but it is different

Yes it is, very easy to rip too

The difference is no cd drive can scan exactly to the start of a track, all drives have a read offset , some are more than others it’s so it does not miss any bits. Some argue that this offset can cause some difference from my experience I beg to differ.

When I say you have to listen hard, what I mean is.
When I got my rossini it was just massively different to the NDS, anyone could have heard the difference, it was that obvious.
This isn’t like that at all and the difference is right at the other end off the spectrum completely.
Like I said there is a difference but not a big one, and I could certainly live without it right now.
Headphones does make it slightly easier to hear and you would probably put it down to a different cable being used, if you didn’t know what was going on.
But left it for today and as said will see if it’s any different once its warmed up more.

Well a new day and so it continues.
First off i decided to check the settings in my melco, as i hadn’t rip to it before, apart from the 2 CD’s yesterday, well that proved to be a good move as it wasnt quite right.
So once again re ripped the same 2 CD’s, so now have 3 different versions stored on the melco.
I can once again say there is a slight difference and more so from the original buffalo rip, its not a lot different, but it is different and it does for some reason sound nicer.

There is definitely more space, air around instruments and vocals and as i said before a bit more punch, it sounds slightly faster, if that makes sense. I find it hard to explain really, but it has made me think that most off my CD’s are going to be re done, not all off them, but i feel the slight difference is worth the time spent doing it.

The bigger question for me is would i pay £1099 pounds for one, that i feel is a NO, mainly because i have a fantastic rossini cd player sitting on the rack and that does a very good job and was slightly better than my rips i first did with the buffalo and if i wanted that little bit off extra, then i could always just pop the disc in, right. But that seems a waste of money having the melco ? The D100 has taken the rips to the same level and i tried this morning to separate the newly ripped again CD’s with it and i couldn’t tell any difference at all.
This for me is what i was hoping for as i was surprised when i first used the CD player in the rossini and it just shocked me as it was just better sounding than my melco N1zs/2 and i was thinking about selling the melco.
So off to start re ripping all my favourite albums once again.

A massive thank you goes out to Paul at HiFi Lounge for letting me borrow his D100, as he certainly didn’t need too do that, so once again thanks.
Just to add, please dont go asking paul to borrow this, as he did this for me as a great favour, that i will have to pay back.

Well off we go again, the re ripping has started 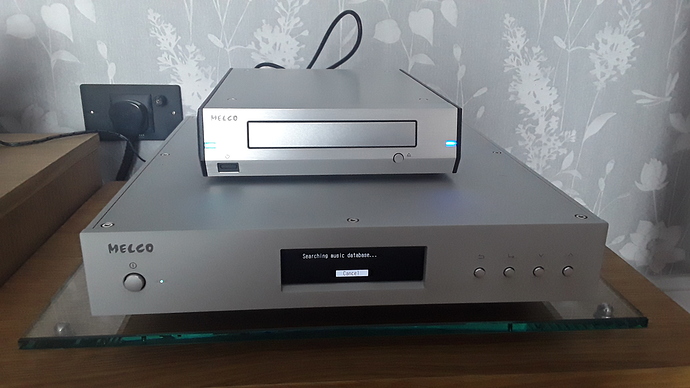 The culprit that started all this ripped quality debate off.
Would have been so much easier to stay with the NDS and just not ever get to hear the difference that the Rossini/clock bring, but then thats far to simple isn’t it 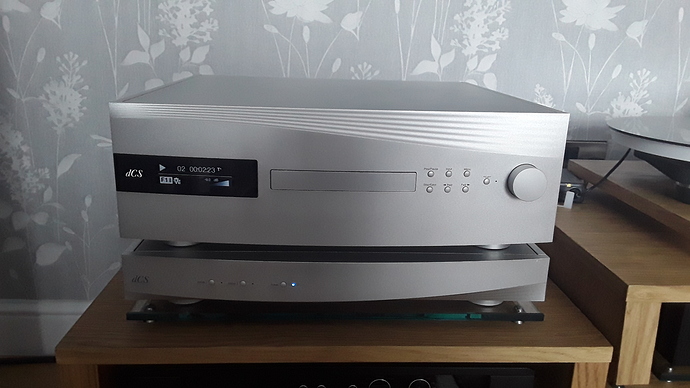 I have quite some experience now with my Melco rips. And yes they are better, not by a big margin, but definitely audible. I find them more relaxing to listen to. I also had the advantage that I could get the device at a good price as my dealer was closing the business.
I am now close to 1000 cd’s which have been re-ripped, still a lot to go however…

They certainly take longer to rip on the D100, i dont have anywhere near as many CD’s as you and for you the value will obviously be better.

With the Buffalo, swap for a linear PS (or high quality SMPS). Place it on some anti-vibration platform. Cover it with something that keep light out. Use a good quality USB-cable.

Clean CD before rip. I use an ultrasound bath. If you have a ”green-pen” use it.

To see the differences you need a very revealing system, like 500 series full system.
With a little integrated amp and bookshelves, it would be much difficult to hear differences.
What was the system in that test?

I do have some Melco-rips to compare with but since loaning the Melco I have moved on to my own ripper-software where I have been experimenting writing .wav-files with different layouts … so those melco-rips are a bit out of date for comparison.

Be sure to get the brand name of the green pen!