I use Spotify, Qobuz and Tidal, the latter two I download content offline via WiFi for music on the go as even 4G struggled.

However now 5G is in my area and it’s bloody blistering, I have a good coverage for a few miles. This afternoon on the go I downloaded 3 playlists with around 250 songs in about 5 mins.

So this makes me think as we get faster connections surely MQA and 320k become less relevant due to file size? 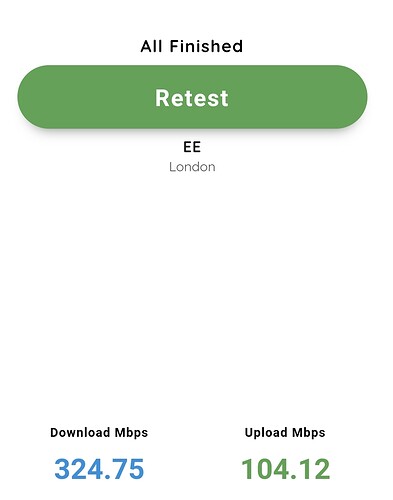 Has MQA ever been relevant

It may well be that 5G can make regular ADSL or even fibre internet services unnecessary for some, especially in rural areas where the infrastructure in use has been obsolete for decades and is really not fit for purpose.
However, I’m not sure how 5G fares in terms of latency, which will be far more of a performance limitation for some.

The UK should roll out 4G for everyone before 5G takes a hold in the cities.

Not see any lag to date.

Forgot to say I have not used my pitiful sky fibre supposedly 75MB in weeks.

Part of the reason was Sky always being a problem so I went for 5G as a back up.

Even changed my Qobuz settings to allow 24bit streaming on the go.

Speeds fine for now until it’s over utilised like 4g now is. Also the usual data caps and tiers will continue to be counter productive. Spotify wont be in a hurry to change from compressed why would they when 99% of their customer base hasn’t a clue about what flac or lossless is and some parts of the world are lucky to have 3g

Not see any lag to date.

Latency won’t be much of an issue with streaming, but as a replacement for ADSL the problem will largely be online gaming which has quite strict latency demands

I’m thinking mostly of 1st gen. Naim streamers, which are very easily flummoxed by high latency due to their small buffers.

Sure, could be, will depend on the 5G load and an old streamer in this setting may be pushing it. I meant my comment more in the sense of 5G being a general replacement for ADSL . That’s going to be more of a problem for gaming rather than streaming with modern endpoints. (In Berlin, I have no issues streaming Qobuz/Tidal to the phone in CD quality over 4G when on the move)

I’ve tried running 5G via the iPhone dont remember the latency - I think I had around 10ms.

The latency will depend on how far away the server is as there is a round trip involved. Also the download speed is critically dependent on the number of users on the network in that location. I suspect that there is relatively light loading on the UK’s 5G network at the moment. This Speedtest screen below was yesterday just before lunch, sitting in the vet’s car park. 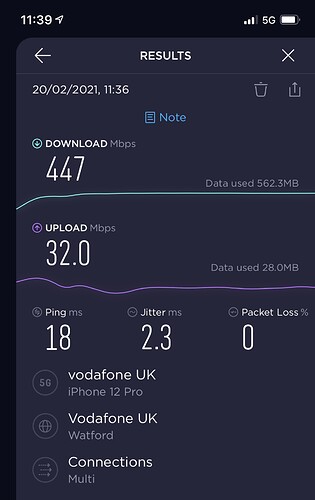 Incidentally, using speed tests on mobiles does use quite a lot of data. I ran this test twice yesterday so that is about 1 Gb of my data allowance I used.

5G is really aimed at high density areas due to the fact that it’s more efficient with high client counts. Yes there are some CAT protocols that 5G support that can, potentially, make it faster (so 1-2gig or more depending upon mast and client equipment) but it’s main forte is more clients. The frequencies currently used for 5G mean shorter range (like half compared to 4G) and dramatically reduced battery life; okay, not so much a problem on a fixed router. However the reduced range makes it a bad choice for rural areas where the mast to client range is typically more. Remember CAT6 4G can do 300meg which, let’s face it, is enough for everyone unless you want higher bragging rights

…though 5G is more efficient with more clients. The issue will be though just how big a backbone the mast supports. 1000 users at c. 40meg is a different thingy of fish than 1000 at 400meg! So you might, indeed, find speeds start to be affected when you get lots of clients all trying to do speed tests at the same time

So thinking back to the WiFi vs ethernet, I plan to test the Hifi using a 5G hotspot.

Wondering what factors can affect the HiFi.

You mean than wifi? That may well be so because 5gig wifi is an even higher frequency than 5G (mobile) and it’s the higher frequencies which need more power. I have a tablet on charge 24/7 that I use to control my streamer. If I have it using 5gig wifi then, despite being on charge all the time, it will go flat after 24 hours. I run it on 2.4GHz wifi and no problems with going flat.

There’s something wrong with your tablet then. My iPhone and iPad are always on 5 GHz WiFi at home and I usually still have 40% battery left on the iPhone when I put it onto charge overnight. My iPad gets charged every few days.

It’s not particularly the frequency used that makes a device more power hungry. It’s more about the distance from what it’s communicating with. It’s true that higher frequencies travel shorter distances than lower ones, so you might need a higher transmit power to reach the same distance. But you might not. It depends on the circumstances.

If I have it using 5gig wifi then, despite being on charge all the time, it will go flat after 24 hours. I run it on 2.4GHz wifi and no problems with going flat.

How many hours of actual usage during this time, with screen enabled and wifi actually active? My tablet is on 5 Ghz all the time (though just ~5 meters away from the wifi access point) and I charge it once a week, but my actual usage is maybe 2 hours a day.

Permanently on with the screen also on all the time.