I was wondering after some “feedback” in the audio forum (see what I did there?

) whether there was a significant number of model steam buffs within the Naim community. I am guessing that is likely so thought these might be of interest. 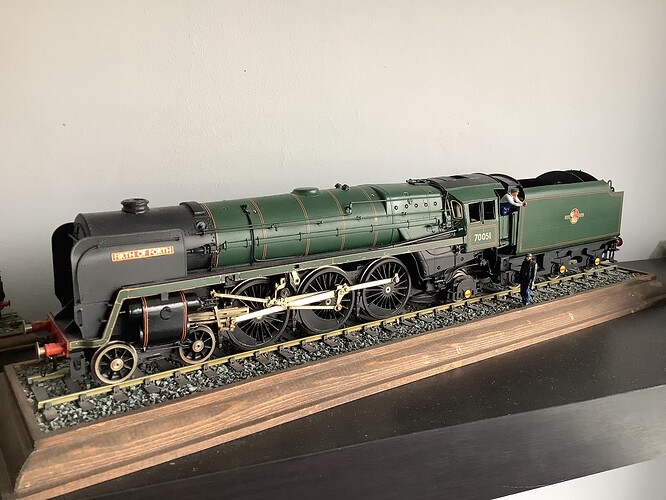 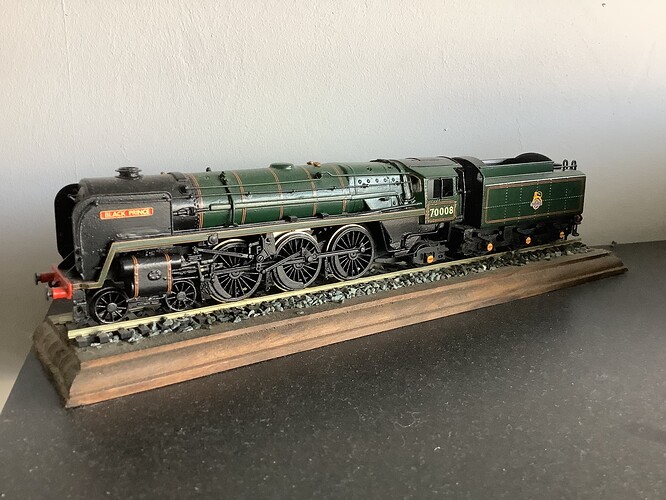 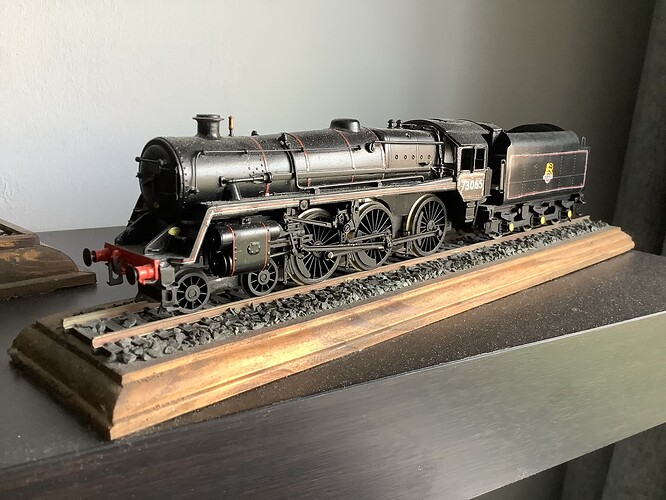 Lovely models. I would suggest some covers however, unless you’re going for the ‘heavily weathered’ look. They’ll be a bugger to dust!

I use a fluffy makeup brush for dusting. Works a treat and doesn’t catch on any of the small details. Covers would be best but we don’t like the look of them.

You take me back to my chidhood when my father decided a Hornby 00 train set was a requirement for Christmas. As much a need for me as him I suspect. It wasn’t just an oval and a basic train but as much as you could fit on a decent size dining room table. Great fun! Hornby used die-casing for their engines and were very well made. I think we had Christmas dinner on our knees.
This all jogged along nicely into my late teens when the hi-fi bug started to bite and the trains were sold to fund, or part fund it.
In my middle age I dreamt of a garden railway, Gauge 1 or larger but it never took off.
The closest I get to all this now is looking at U-Tube where there are some enormous layouts especially from the US. Garden ? railways in 15" gauge track!

I was seriously planning an O Gauge garden railway this year but my garden is a big slope and it would take a huge effort to create a level track. Still thinking about options but it might end up a pipe dream.

So many questions, but I don’t want it to seem like an interrogation.
With sound and sync smoke, I guess it’s DCC fitted?
The two figures complete the scene well. Either of them ‘you’? (I’m thinking of ModelU’s 3D scanning process).
Are you a lone modeller or part of a club? The standard of your models suggests that they deserve to be displayed at exhibitions.

Fire away! Thanks for the complement. I’m a “lone” modeller and just enjoy building things. My wife is a steam buff and actually drove a Black Five some years ago at a local preservation line so that’s why they are on display in the living room. I have also been building wooden ships and plastic models since I was 3. Brass and white metal only for the last 7 years.

The big Brit has an ESU XL dcc sound chip in it and a smoke generator connected. There is a whole world of dcc that I don’t want to get into (even though I worked in IT for 25yrs so the seller programmed the chip and got it to chuff with the smoke. I just installed it (which was a job in itself).

The figures are 3d printed but neither is me. The material used is very brittle and thin parts break off easily. The shovel handle in this case. Otherwise they are far better than the usual figures available.

Oh and the models are far from perfect when you get close up. I’m happy with them though.

Does a Standard Five count as a Black Five? Two different loco’s for me. Nerd mode off.

A OO Duchess I repainted and weathered for a friend some years ago.

A G2 I stripped to bare metal and repainted for the same chap.

Yes your right. Mine is a Standard Class 5.

Not sure I should venture the following confession. But what the hell, I am among fellow nerds here after all. Please don’t judge.

OO model railways is my principal hobby still, for so long as I can continue to ascend the loft ladder.

Sadly, much time was lost in completing my layout by getting drawn in with a group of friends, to the extent that we finished up establishing and running a business to make and sell a range of kits to fellow addicts.

I think trains, for some reason, have the ability to get into your blood at a very young age.
One of my fondest memories of my father is a time in the late 1960s (I think) when he needed a spare part for his moped and took me along to the shop (‘Toyland’). I was absolutely mesmerised by a model of a big steam loco on the high-level display shelves behind the counter. Even as a child I understood that money was tight for our family, so it was a huge surprise when Dad gestured towards the display shelves and asked me “So what do you want, then”? I pointed to the steam engine model. “We’ll take that” he said to the shop assistant.
Coincidentally that loco was a R2595 Triang ‘Britannia’ with ‘seuthe smoke’ which today is one of my most prized possessions, and always will be.

There are a number of books you can buy on creating a garden railway. I think 0 gauge is too small: at least gauge 1. Its got to sit there throughout the winter and be re-commissioned in the spring.
Advice from a landscape gareiner would be helpful and if you have confidence get them to do the digging boring bits. Have a converted tool shed as a base for the system. A bit like hi-fi: you can do it in stages.
Not to be undertaken lightly as its a big project and not cheap, but I expect you know that.

Alan Ainslie who headed up Naim’s Naimnet project some years ago had a fantastic railway set in his garden. He had an open day and invited staff and their family to come and see it and have a go. Here’s my daughter Dora, dressed for the part and having a go on “Kate”; 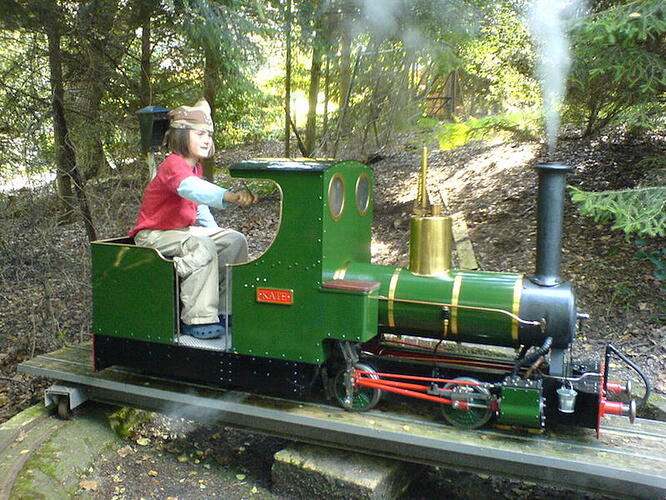 Slightly more prosaic, I still love the old Hornby Dublo 3 rail system that I inherited from my father. I keep telling myself that one day I will set it up again.

I totally agree but Gauge 1 would only mean I’d want to build the engine and G1 kits are few and far between and v.expensive. I have have too many hobbies unfortunately and they are all expensive. But I do enjoy them all. The garden railway project is just going through a good deal of thinking about at the moment. Who knows, maybe next year?

oh and it would just have to be live steam!

Stationary Steam. Stuart 10V single cylinder engine machined from a set of castings.
For scale flywheel is 3 inch (75mm) diameter. It runs a treat on compressed air, but I have never run it on steam 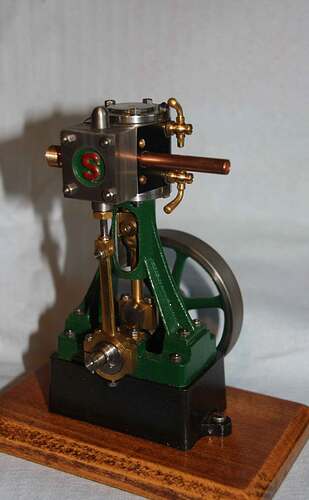 Yes and no. The Standard 5 shares some of its componentry with the Black 5 that came before, but I don’t know how much, so there is definitely an overlap but they are different. This I learned from my Godfather when I was little!

A few years back, I went over to Alan’s to get my Melco fixed by him as he’s 10 mins away from me. I was intrigued as to why he had some rails running across his garden so he showed me the railway. Amazing !

Yes, it’s pretty amazing isn’t it. He had mentioned it on a number of occasions but nothing prepared me for when we actually got to see it and actually ride on it too!

To your original question, I’m not sure where I stand on this. When I was between 4 and 12, which is an immeasurably long time ago now, I had a model railway and it was a hobby almost everyone else at school at least understood because of fathers, brothers etc and back then along with Scalextric, Airfix and similar, or Subbuteo it was the dominant game in town.

I never understood steam engines but whenever I didn’t want to talk about them, I recall the wistful look on my late father’s face which I failed to understand. There was no real preservation scene then and I had no interest in the past.

Fast forward some decades and on his first birthday my son was inundated with Thomas gifts, which he played with, sort of, but had no understanding of. In that intervening period, Britt Allcroft and Rev Awdry had conspired between them to create a market for preservation that was so robust I decided I’d take my son along to Didcot shed to see what Thomas was. He was completely bewitched instantly and for years thereafter by these hot, snorting, smelly machines that shook the ground you stood on. Later still I saw a BBC Timeshift programme on the last days of steam that helped me better appreciate that for my father and godfather, this had been THE hobby when younger. In those moments at Didcot I could see why. It was a shame my father and my son would never meet because they would have had this bond. I also recall one Christmas my son and my brother in law playing with the Lionel set during a visit to Chicago and they were clearly simpatico.

I was persuaded to build a model railway for my son but with him now so moved on to other hobbies, it has long since gone into storage. I can’t bring myself to eBay these things, I used to tell myself it would be a hobby to return to when I retire, but I doubt it. I’m too long sighted now for a start! Instead I’ve moved on to these odd rectangular boxes, the wires that connect them and the music they reproduce, and for now at least love classic cars even more.