Alternatively, I may consider another brand. I’m craving the power of the NAP 135s. Which thus far I haven’t heard in another power amp.

Hi Khan. I have owned a pair of 135s and now have a 500 which has been DRd some time back. When the 500 was away I had a 300DR on loan. Not as good as a non DR 500 I thought.
My audio memory is being stretched somewhat. All I can say is the 135 might by todays ratings be a little crude, but pretty gutsy. Having said that i would not want to revert from my 500DR to the 135 which is still a great amp.
Hope that helps.
Douglas.

Similar to Douglas, I’ve had 135’s for a long time then found a non DR’d 500, which was instantly better in every area. I had the 500 DR’d last year and whilst away I used my old 135’s to substitute. They were still as good as I remember but compared to the 500 there was a definite drop dynamics and drive. Of course the DR’d 500 then up’s the game even more but at a cost.

Is it meaningful to consider the qualities of a power amp in isolation?

Thanks for the replies. I was especially intrigued by the non DR 500 being preferred to the 300DR. I had read a few comments that suggested to the contrary.

I should add that the reason I crave power is because I’m using the Harbeth 30.2s. Which I’ve used with the 250/250DR and a smattering of other amps. The 135s woke these speakers up like nothing else I had tried. Even the NAP 300 (non DR) driving the Harbeth SHL5+ didn’t seem to have this level of grip and control.

After six months (and a failure in the Naim upgraded 552DR to cope with), I just felt that something was missing in my enjoyment of rock music. I couldn’t pinpoint it except to say that the music wasn’t as exciting as I was used to. Nor were the bands performing as coherently as with the former system.

I reverted to a 52/135s (serviced by the excellent Darren at Class A) and low and behold the magic returned, instantly. Whether it’s a Klimax DS/3 or LP12 SE source, the system sounds perfect for my ears.

Hi Khan,
Buy a pair of NAP135s?
They bring years of musical enjoyment to those of us who have.

I once looked into swapping the 135s for a non-DR NAP300 but the 135s had more drive, energy, excitement, call it what you will. They certainly controlled a pair of PMC Fact 12s in a way that the 300 couldn’t.

I am not sure that that the NAP300DR sounds as though it has more drive than the 135s but it does bring effortless, smooth, refined, insightful resolution. I think the 300DR is simply marvellous.

Is there a big difference between the CB and Olive Nap 135’s?

Reason for asking: CB versions seem to appear on the market more often than Olives.

The NAP135s remained mainly unchanged internally, apart from the fairly minor internal changes made that mimicked the NAP250.

A customer at the dealer I have used for a long time had a six pack of 135s activley driving DBLs.
He later bought a 500 (pre DR) and had the DBLs converted to passive, which be prefered.
Each to his own?
Douglas.

Hi,in my opinion the 300dr is the best value for money on the market in every aspect.Fantastic detail,balance and makes my weakest link ie speakers sound good,paul

Hi Paul. What speakers are you using please?

I went from 52/135s to 52/300 nonDR and thought the additional bass weight worth the outlay alone.

DR’ing the 300 was another significant upgrade; but that was at the same time as the 52 became a 552. The 300DR has now gone and a 500DR sits in its place. That is such a wonderful upgrade I wonder why I took so long to get there; a really good pre-used example certainly eased the financial outlay.

Having run a 250 (pre-DR) and auditioned a non-DR 300, I was unimpressed with the latter. The 300 had more detail and provided a wider ‘picture’ of the music and, to my ears, it was (over) relaxed in doing so. That visceral quality mentioned by the OP was no more. I lost something as against the 250. I then tried 2 x 135 and these provided the extra control and oomph I was after and maintained the same presentation as my olive 250.

To my ears, the pre-300 amps were mid-range focused which, at the time, generated the excitement for me. The 300 (now DR) provides a more detailed insight in to the music and a much wider perspective.

There are some Forum members who skipped the 300, as it was/is felt a 500 (DR or not) provides that something extra in presentation as against a 300.

You can only trust your ears with this. Some will like the sound orientation of the old chrome bumper and olive ranges (inc 135s) and some will take to the soundscape of the later amps.

There have been a number of threads on upgrading from 135s and (IIRC) in most cases the 300(DR) takes time to appreciate in one’s system - and when this occurs, there’s no going back.

A few years back, i ran in a pair of Olive 135s for a friend, which had just come back from the factory after a full service. I opened the sealed boxes, placed them on my Fraim together with my existing CDS3/282/SC2, in place of my then Nap 200. Quite frankly the 135s whoop’d the 200 by a very large margin, and that was fresh out the box. The proceeding weeks were a lot of fun with them getting even better. It was after i was going to give them back that my friend offered them to me at a pretty fair price (clever guy😀). He knew i was looking for a set of 300s… Long story short i found an ex demo 300 (before DR was even out) and they were not much more than the 135s. I decided to go with the 300, which by the way were great., just not as ‘great’ as those 135s…which were special.

I agree with Gary.
I had the 552/135 when I swopped the 135 for the 300. Yes it sounded a little better at first but I ended up regretting making the change. My 300 is now upgraded to DR but I still think that I would be very happy with the 135 instead.

More and more people confirming my impression exactly. The NAP 135 really is one of the best amplifiers that Naim have made. 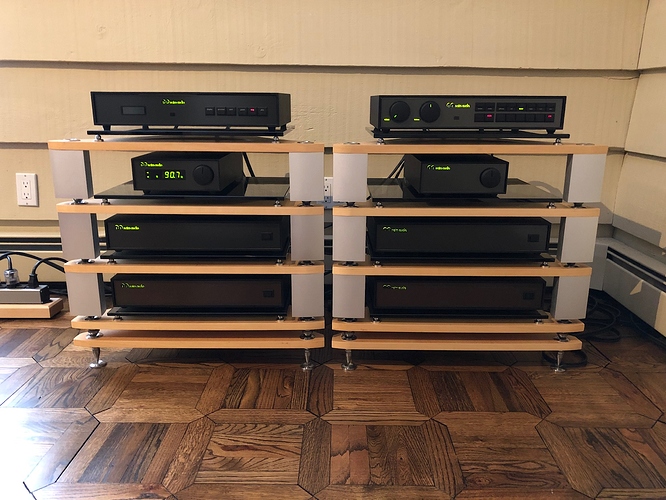