Moving away from vinyl?

Has anyone done it, stopped buying records and started to either just stream or use CD’s?

I have to admit, recently I have been tempted to move away from vinyl. I am finding that they seem to be creeping up in value, and the standard of pressings are reducing.

I replaced an rp6 with an rp8 earlier this year to bring vinyl up to streaming quality in my system, which it did. I have since purchased two lps. The local retailer wants Cdn. $200 for Revolver re-issue. That’s more than our weekly food budget.

That must surely be for the multi-LP set. You could get the single LP from whichever of the Amazon sites you prefer for around £20-£30 Sterling.

Yes. Wasn’t aware you could buy just the one.

I loved records - until I upgraded my streaming to Tidal, I don’t think I’ve listened to my deck (or CDX2) since!

I’m genuinely not sure if you’re being serious, so I’ll just leave you to have a look online in your own time, and make up your own mind.

I think you’re referring to the original release. I thought you were suggesting the Oct 22 release could be purchased as a single lp without the extras. I’m sure the multiverse is a great place but no idea how to get there.

You can buy the 2022 remix vinyl as a single lp. For example on Amazon U.K. and other record shops here although I think you may be in Canada. 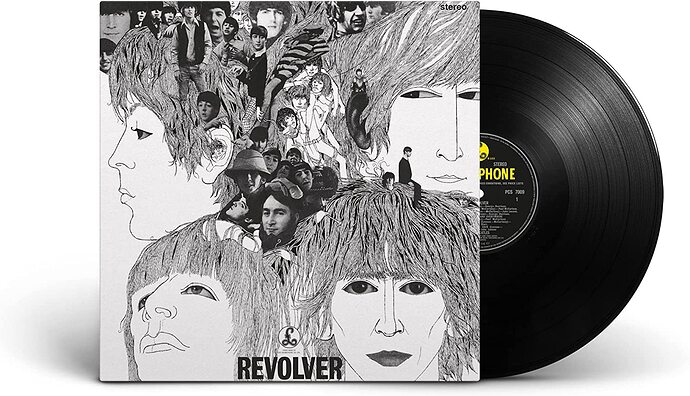 From “Taxman” to “Tomorrow Never Knows,” The Beatles’ REVOLVER has been enhancedly mixed by producer Giles Martin and Sam Okell, and sourced directly from the original four-track master tapes with audio brought forth in stunning clarity with the help...

Beatles releases are very much premium priced, although they are also of high quality usually.

I haven’t moved away permanently from my turntable, a P8, but I havent used it much recently despite purchasing some lovely vinyl in the last few weeks ( Trio 65, Blue Train Complete Masters, Cool Struttin etc).
Thats not to say I will not return to it at some stage. My preference at the moment is an old Arcam Alpha Plus CD player that I bought broken for £30. A little diagnostic TLC bought it back to life and after a recap and laser adjust, sounds phenomenal to my ears. The old Philips combo of a CDM4/19 and TDA1541A DAC chip…wonderful.
I tend to listen in phases, CD then streaming then vinyl…

No real reason… P8 will get its turn in a few days no doubt.

I really must be missing something obvious. But I shan’t bother too much.

I am a complete streamer. Quality is outstanding compared to vinyl.
I have a P8 for older records and also for some new ones that I just fancy in vinyl for the atmospherics and emotional connection to putting an album on. Quality though is not as good as streaming.

Streaming is like reading ebooks. Many like it. I dont, I’ve stopped upgrading the digital will begin resurrecting/upgrading the LP12. Right now I always buy the CD. It just feels nice to have that physical connection that will last long after that playlist is gone. According to some surveys quite a number of those who buy physical media dont own a player - they listen via Spotify.

The best thing about buying physical media is that the Artist(s) get paid properly!
I stream a lot, but if it’s something I’m going to listen to more than that first time, I buy it.
Artist gets paid🤷🏻‍♂️

I found that a strange argument. I haven’t found that artists are refusing to allow 50 million streams/ downloads in favour of selling physical media. Surely they would if the income was greater from physical media?

I neither agree or disagree with that, but it makes me feel better🙂

Vinyl is expensive, takes up space and sometimes there are quality issues. But I like the physical medium and wouldn’t want to be without the regular trips to the local record stores!

Quality though is not as good as streaming.

Can do but depends on your source. My Thorens TD124 DD/Hana ML combo is stunning, it trounces my NDX2.

Lots of people have!
I did gradually between through 1990s and 2000s, my Cambridge CD2 then Shearne Phase 7 CD players being better sounding than worn vinyl, so my buying of vinyl decreased and eventually stopped.

Later I switched to streaming(from my own store of ripped CDs, ripped vinyl, and downloaded files. And was happy with it, in due course changing the source/DAC following which my vinyl-preferring brother in law, who uses an LP12, grudgingly admitted it sounded better than his system.

Several posts in previous threads, this possibly my most comprehensive:

Regarding the ‘new world’, a few years ago my CD player was on the blink, so as I do at such times I turned to the HiFi press to find out what was around, and learnt of this new (to me) streaming world. It seemed to me that streaming is the medium of the future, so made more sense than investing in CD, which I would expect to lock me in for another 10 years. After due research I got an ND5XS, and bought a cheap NAS (Zyxel NSA325) to store and serve. (Ialready had a home network). I had a head st…