Greetings all.
I have a question regarding “hi-res” or mqa files being played back from my Muso-QB2 from Tidal. I know not everyone is a fan of mqa but any wisdom or advice would be greatly appreciated. It is my understanding that when I play an MQA file from the Tidal desktop app and into my dragonfly red it is “unfolded” to 24 bit 96khz, having said that I think I remember reading that the QB2 has its own DAC that upscales or downscales any music coming into it to 24 bit 88.2khz. So my question is if the final 88.2khz that is played from the speaker is a standard/FLAC 88.2 khz or an MQA 88.2khz or neither?

The Dragonfly is an MQA DAC, so it will do the full ‘unfold’ of MQA into whatever format the recording was made in.
The Tidal app only does the first of the two unfolding stages, so you are only getting part of the (subjective) benefit of an MQA file. However, you still get that if the DAC has no MQA support, as it’s done in the app software.
Personally I didn’t feel there was any benefit over regular 16/44 so I ditched Tidal and moved to Qobuz to get full lossless 24 bit streams

Thank you for your reply. I’ll admit there isn’t too much to get excited about for higher than CD quality…its just a question I’ve been asking myself as I’m still relatively new to the scene.

I have a Dragonfly Red too (bought when I got a new iPhone with no headphone socket) so inevitably ended up trying Tidal MQA out of curiosity, as well as using Roon into my Naim streamer, as that can also do the first unfold.
If Qobuz is available in your location I would recommend giving it a try. No unfolding to worry about, just regular lossless 24 bit.

I seem to recall @Stevesky confirming that if you select a Tidal MQA track in the Naim app, Tidal automatically selects a regular 16/44.1 version instead. Otherwise you would have the disadvantage of a lossy MQA file, without the subjective advantage of MQA HiRes.

I have a few MQA files and just converted them to WAV in DBPoweramp. Not sure what they came out as but they are higher than CD but don’t sound much better imo

Having the DCS rossini, i am blessed as it can do MQA, having tried tidal MQA and qobuz, I am happy to just use qobuz.
Some MQA tracks do sound very nice, the rest just average, and certainly wouldn’t get hung up about not having it

No, that is incorrect. An MQA file can be played in a backwards compatible mode of 44.1/48 kHz sample depth rate of about 16 bits from 24 bits with added digital (not analogue )noise … so less than CD quality… on good equipment, but a fair degree.
But the Naim app will only select PCM files rather than the MQA encoded files.

@Simon-in-Suffolk the files ended up as 24bit 48.0khz after being converted to WAV in DBPA.

Yes MQA uses a’ bit stacking’ method so the encoded processed sample is 24 bits, with 8 bits of digital noise… so if appropriately filtered will appears as a kind of noisy 16 bit sample… albeit encoded as 24 bits… 8 bits are junk for a non MQA decoder. So this is lesser fidelity than CD, but uses more data, but does provide a degree of basic backwards compatibility which I guess is quite clever. 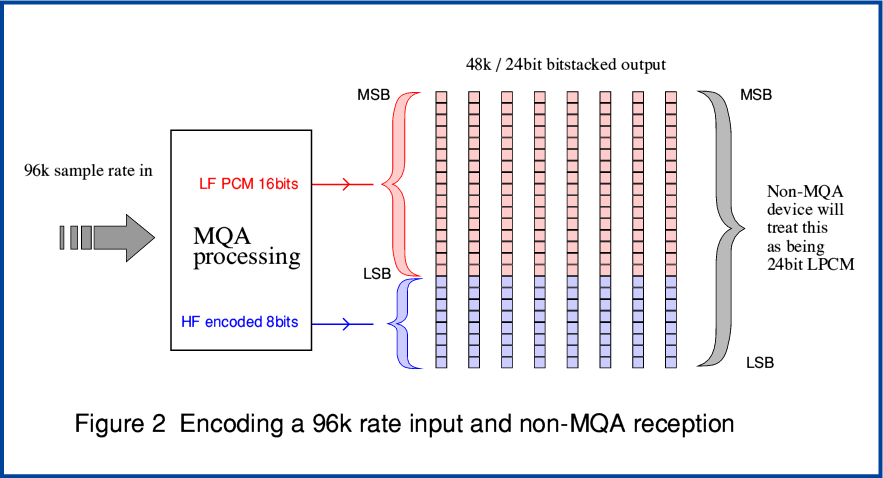 @Simon-in-Suffolk so its just a CD quality file then… sounds like a bit of a swizz. No wonder Naim don’t support it. …or am I missing something else?!!

I see, so that’s from the naim app but what if it is coming from the tidal app from a pc through an mqa dac into the QB2?

No, it’s less than CD quality…if not MQA decoded. The MQA decoding takes the base signal and adds lossy / compressed hidefinition information to it.

MQA is not a swizz but one should be clear what it is and what it isn’t. MQA decoding can certainly provide an impression of hidefinition where the source bandwidth is limited… so great for mobile devices. MQA also provides a degree of predictability of the filter response in the DAC… so some might argue that a benefit… I personally don’t.
As far as Naim, I guess it depends on customer demand and licence costs… if the demand is there I am sure they will look at it.

yes this is what im trying to get my head around haha.

@Simon-in-Suffolk ok, sorry for being really dense but whats the point of the format?!! Clearly nothing if you own Naim but why not provide a higher quality file if its faced with a decoder than cant read it…

Thank you for all the information you’ve provided, very helpful.

It is correct that you get “full MQA” on output of the Audioquest Dragonfly DAC . But since MQA is an end to end system, the last digital to analog conversion (hardware of course) must be MQA compatible. Feeding the analog output of Dragonfly and converting it twice in a e.g. Muso will NOT give you full MQA anymore.

You are wrong. MQA does not alter the CD content which is 16Bit 44 kHz. Actually it is lossless up to 48 kHz . Higher than that “losses” are areas where never ever music signals occur, because all instruments produce only low volume high frequencies, even at Brittens War Requiem or 1812 by you know whom. So pls read the available information in AES papers or serious reviews. Or just listen to it, maybe not only through a 100 bucks DAC .

You seem to have this 100 bucks dac you are referring too , as you have the Bluesound.
Do you really hear differences between Mqa and non Mqa through the Bluesound?