The balance knob on my 552 never seems to stay dead centre: it’s as though it moves slightly to one side on its own accord. Does your knob keep moving?

Only when the kids mess about with it! They twisted it so far round the other day the central position was about 3pm until I ‘forced’ it back!

When I was being measured for my diving drysuit, I was asked which way my knob lay. I doubt I’ll ever get that asked that again. Suits you sir.

My tailor would always say: “which way do you dress sir?”.

Sorry you didn’t get a “straight” answer…

That’s why i don’t like too much knobs on a box. I would be balancing my knob all day.
Maybe this is the reason for the word “knobhead” ?
A knobhead is someone balancing his knob all day…?

I’d put a camera on that knob to see if the knob rotates itself.

I only have a tiny deviation so I’m not sure if a camera will make it look noticable.

A closeup should work.

Perhaps, but I don’t have a recording device that I can leave on for a long period of time. It’s as though I straighten my knob but after a while it seems to deviate a touch to one side. It’s visually annoying to have a knob that is not centred. Other people have also noticed that my knob looks bent but it doesn’t bother my wife. I’ll try to upload a picture of my knob.

How much does it move by? 1mm? 1cm? Once it’s moved does it then stay fixed?

With all due respect, this is freaking hilarious.

Edit: if you had originally used the words “dial” or “control”, you could have spared yourself some grief. But it wouldn’t have been so funny. Also, on a US forum, these unfortunate associations with alternative meanings of the word “knob” would not have happened. The British are tricky when it comes to English!

Lastly, if your wife doesn’t mind your knob looking bent, then consider yourself a fortunate man.

I am reminded of a limerick about a guy of whom it was reported “instead of coming he went”.
Best

Could it be from using a remote for another device ?
In the past I have had this. Like changing a function on the telly would also change something somewhere else that shared the same remote code.

Or perhaps it’s a seasonal thing. It’s spring time and everything’s growing towards the sunlight.

This is the best picture I could take of my knob. You may notice that it looks like it is deviating ever so slightly to the right. It doesn’t move past this point, but visually it is distracting to have a deviated knob. 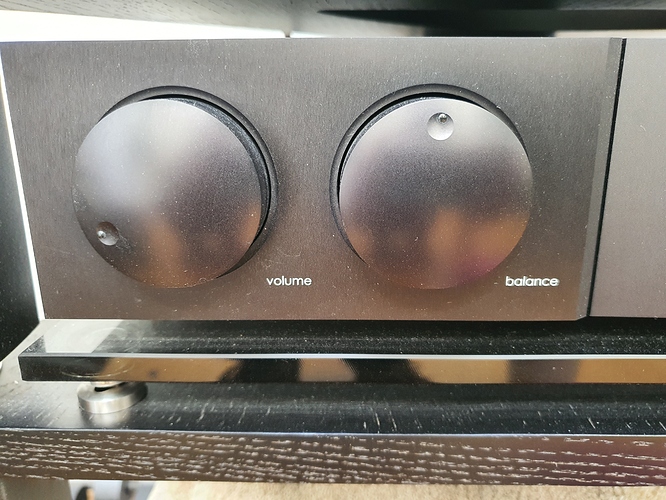 Could it be from using a remote for another device ?
In the past I have had this. Like changing a function on the telly would also change something somewhere else that shared the same remote code.

Good thought. I had such a clash between the remote control for my gas fire and my Youview box. If you lit the fire, it put my YouView set top box into setup mode. Humax technical Dept acknowledged that they knew of the problem but said they had no suggested fix except to change either the fire or the YouView box. So the YouView box ended up in the electronics skip at our local recycling centre. (It was much cheaper to chuck the box than to replace the gas fire).