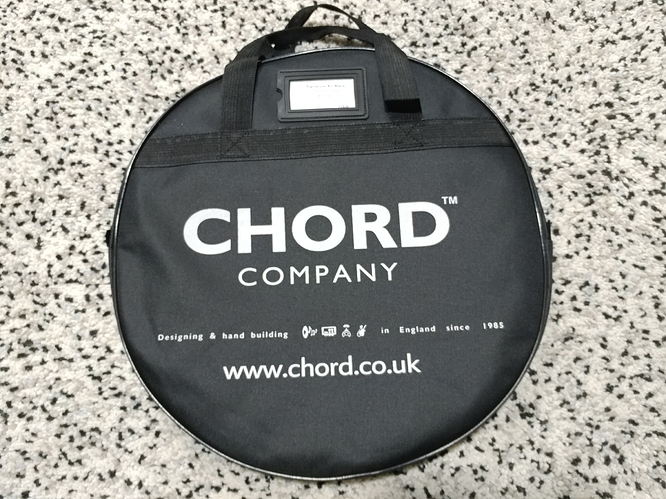 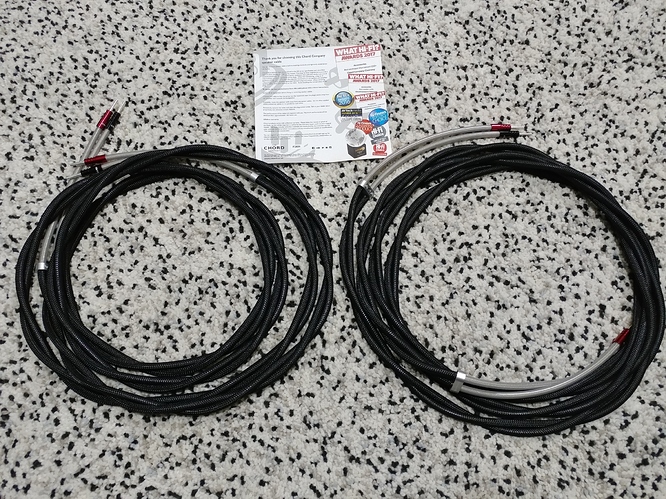 NACA5 user for 10 years (still have the cables with me). Used Chord Epic Twin for about 2 years before they were traded for the Signature XL.

NACA5 cables came with the 202/200 bought used, Chord Epic and Signature XL were bought new. Currently breaking in the Signature XL which probably have about 100 hours on them. And yes, they do improve with time.

I’m interested! Out of curiousity; what is the length of these cables?

I will try to keep it brief. All cables sound different. The NACA5 and Epic Twin sound rather close to each other with the Epic sounding slightly smoother, detailed and more refined across the frequency spectrum. The Epic’s treble is slightly smoother with a little tube-like glow and bass sounds fuller and goes deeper than the NACA5. The NACA5 has a bit of midbass hump apart from having less bass than the Epic. Overall the NACA5 is a bit aggressive sounding when compared to the smoother and more refined Epic Twin.

The lack of refinement of the NACA5 can be regarded as higher levels of excitement. The smoother Epic Twin can be regarded as a duller sound. All in the context of the system and personal preferences. In my system I prefer the Chord Epic over NACA5.

When I switched to the Chord Signature XL, the cable sounded almost the same as the NACA5 within the first few hours, so I left the system play continuously through the night at whisper volume levels to break-in the cables. I’m not sure if the cables are breaking in when playing music at very low volumes. probably 5 to 10 dB. Sound quality improved a little after 20 hours but approaching 50 hours I called my dealer and asked if he had sold the Chord Epic Twin which I traded for the Signature XL. I entertained the idea of getting the Chord Epic back into the system as the Signature XL does not sound good during that time. It’s way too smooth, pale and flat with a severe lack of bass punch.

After about 100 hours, the system started to open up and the Signature XL now sounds quite different from both Epic and NACA5. The differences are clear when I played some very familiar music I have been playing consistently throughout the years, 20 years. I also played some music which I didn’t play frequently, music which didn’t sound good (with the NACA5 and Epic).

The Chord Epic has been my benchmark or reference as I have got used to the sound after living with it for a considerable period of time. For this reason I didn’t react too positively when the Signature XL altered the presentation particularly in the first 100 hours. It sounded mediocre to poor and back to mediocre, then good. Perhaps I’m learning to get more accustomed to the sound of the new cable but it’s now sounding great in the system.

The most apparent difference with the Signature XL, when compared to both Epic and NACA5 is its neutrality and natural presentation. Music does not sound forced with the Signature XL. It’s just smooth and natural without any grain. No smearing of notes, just pin-point sharpness and in focus. The difference is clear with high levels of listening. There is no harshness and sibilance in voices previously experienced with both NACA5 and to a lesser extent Epic Twin when music is played at high volumes which may hurt the ears. As a result, the volume needs to be turned down so that the harshness is not experienced. With the Signature XL, no such experience when playing at high levels. A refined sound without the harshness.

One may think that the reduced glare and harshness may associate with a dull sound. Although I did perceive a dull and flat unexciting sound between 0 to 90 hours, at 100 hours onward the Signature XL is sounding robust and full bodied. Notes are energetic and the tone is more natural and pure than the Epic and NACA5 to my ears.

Some music which I only listened less than 10 times and stopped playing completely with both Epic and NACA5 are Hiromi (“Dreamer” and “Take Me Away”) and Oli Silk. The tone of the piano sounded dull and muted and music just didn’t sound good so I stopped playing. With the Signature XL, piano sounds more vibrant and the overall lightness of the presentation gives music life and vitality. After listening to these music with the Signature XL, I realised that it’s not the recording that’s bad or dull sounding but it’s the cables that are holding back. The tone has more energy and there is more separation and detail in the midrange and bass with the Signature XL as opposed to a warm thick sound with the Epic and NACA5.

In summary, this is what i feel. The Signature XL to my ears is a more neutral and natural sounding cable with higher levels of clarity and detail than both Epic and NACA5. There is less bass output with the Signature XL but after a while I figured out that the excessive bass output of the Epic and midbass hump of NACA5 are colouration which affects/masks the detail in the bass, midbass and midrange. The Signature XL is smoother sounding, more like good tubes and does not show the aggresiveness, harshness or sibilance when compared to Epic and NACA5. Even if you turn the volume up loud to insane levels, you wont’ feel the harshness. A smooth and natural sound. Even though the sound is smooth without the harshness, the presentation is not dull as the tone of instruments still have the energy and vibrancy, sounding lit. Macrodynamics are very much in the Signature XL although it did sound flat and unexciting during the first 100 hours which initially caused some panic (I did thought of going back to the Epic at one point of time).

THis post does not serve as an endorsement of the Signature XL. After this experience, I now realise the limitations of the Epic and NACA5. Although the Signature XL is not exactly a cost-effective purchase for many, I am glad that I purchased these cables. It had truly transformed my system to a higher level of performance.

With this experience, if anyone feels of improving your current cables, do explore other alternatives other than the Signature XL. You will likely experience a different presentation if the cable is up to it.

FWIW I also use Chord Signature TA interconnects in my system.

As à SHL5 Plus owner myself I need to ask if you experienced benefits moving from 200/202 to 282/250DR specifically in the bass area and overall headroom (not feeling pushed) on higher levels? From my experience the Harbeths benefit greatly from more power/control.

Yes, total transformation going from 202/200 to 282/250DR on the Harbeth SHL5 Plus. I tried many configurations

282 brought a fuller, more dynamic and 3D sound whereas the 250DR’s largest contribution is in the bass department. Going from the 250DR to 200 a large chunk of bass goes missing. Same experience here, the Harbeth surely sounds better if you feed it with more current/power.

Thanks! I’m looking into stepping up to a 250DR myself but not sure about the preamp. 282 reduce the bass response compared to 202 you say?

Thanks for the information.

I currently use Chord Epic Reference, which have meant a great leap forward over the previous Epic Twin, and was rating the Chord Signature upgrade. But after your experience, I believe that the current synergy is perfect: previously, with the SN2 and SN3 I experienced those same sensations that you associate with the Epic Twin, but the current and definitive Musical Fidelity Nu-Vista 600, hybrid, introduces precisely that “more neutral and natural sound with higher levels of clarity and detail, with, maybe, some less bass output, but more like good tubes and without the aggresiveness, harshness or sibilance when to compared to [SN2 and SN3], even at loud to insane levels. A smooth and natural sound. Even though the sound is smooth without the harshness, the presentation is not dull as the tone of instruments still have the energy and vibrancy, sounding lit.”

Another cable that I have there, as an option, is the Tellurium-Q Black Diamond, but the price is quite prohibitive and, above all, given the few possibilities of “test at home without compromise”, I do not dare because I think it may not even prove better than the current configuration.