Hello I was wondering if there was anywhere/anyone we can contact with regards to ideas for improvements to the Naim app. I know that this is the area that I would most like to see Naim develop. Maybe we could start posting here on this post?

I personally miss the physical browsing of a collection and would like the browsing of the UPNP using the app to be more like this. 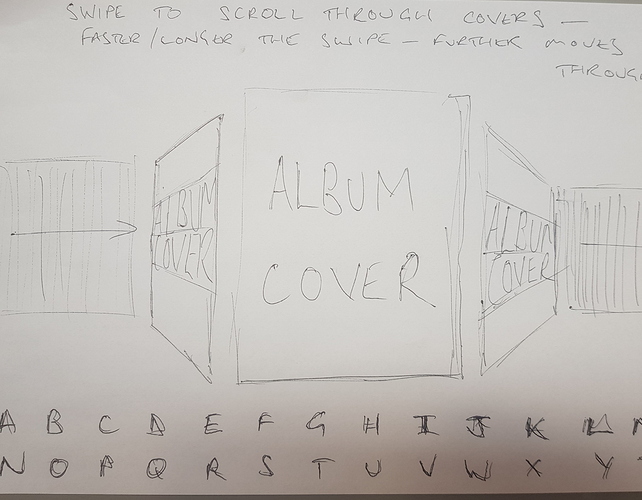 I have seen other apps/programs use a similar sort of graphics as this and it is really effective and when done well looks professional.

You can select the letter at the bottom to jump to that section of your collection (as you would do in real life), then scroll through your albums using a swipe (faster the swipe the more albums you bypass).

As you scroll through the albums twist 90 degrees to face you and then back again as the next one is revealing itself.

Thanks in advance for any thoughts or suggestions.

It’s a nice idea, however is it really any different to what we already have… 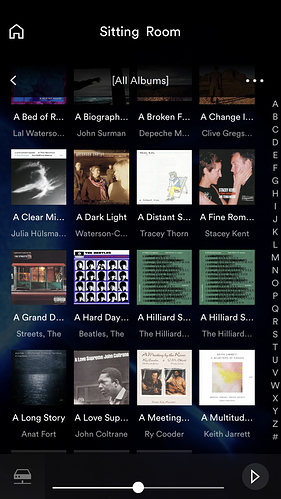 In my opinion it would be a lot better as I find the present layout generic and dull. It would also only be an option in the view selection so you can revert back to the old layout if that suits. I think an app that is optimised for tablets should be made as in my opinion they are much better than a phone for browsing music.

“If it ain’t broke, it hasn’t got enough features.”

I’d rather have reliability than a load of “optional” features all complicating the programming.

In my opinion Naim should be constantly striving to improve and innovate. Simply not wanting to move forward in case it doesn’t work is not an option. This is a small graphical improvement, not exactly a new feature.

Naim’s app is crying out for improvement, if it wasn’t then why is the average rating on Google play 2.6 out of 5?

I would not want features if they did not enhance the overall experience of using Naim equipment.

For example is it wrong to request a search function that searches all your music providers UPNP, Spotify, Tidal, radio shows etc at the same time? The sonos app does…

What is wrong with suggesting a change in the browsing graphics, so it closer resembles looking through a physical collection?

A button which links to the artist you are listening to ‘Allmusic’ or ‘discogs’ web page?

Or a version of the app which is optimised for tablets?

Yes you are correct it is better if the app works, but a phone plays Flac files so why do we pay so much for expensive hifi. We do it because it is a thousand times better in every way. We should request improvements from a high end firm such as Naim to further improve their app, because the fact it works is not good enough.

Naims software should be a direct reflection of their hardware…innovative and works flawlessly.

A button which links to the artist you are listening to ‘Allmusic’ or ‘discogs’ web page?

I’ve absolutely no idea why this would be useful

a version of the app which is optimised for tablets?

There’s nothing wrong with suggesting improvements but the Naim App seems fine to me. The latest updates make it a lot more slick.

It is easy to see by your replies that you really like the app (or want to work for Naim) but according to its average review you are very much in the minority.

Thanks for your contribution though

I think they should first concentrate on getting it to work properly.

The latest update is a joke.

The latest update is a joke.

I never take any notice of reviews.

It just seems that every update creates new issues/problems.

On the latest, it has the jog wheel numbers and locations of stations on the Muso itself nest to the presets.

A solution to a problem that never existed and makes the UI look too cluttered.

I never take any notice of reviews.

…who actually writes reviews about apps ?? I’ve not seen any specifically about Naim apps. I’ve seen comments about an app included in reviews about streamers & similar products, & the Naim products do get positive comments, unlike some others.
If you mean the ‘ratings’ that Apple & Android Stores include, who actually takes any notice of these ??, they are never updated when a new revision gets released so could be numbers of years out of date.

I wish Naim would fix their search engine. My most common search is by “Artist”. I’m looking for every album a given artist is associated with. But the search results almost never return all that artist’s albums. Even when the artist is the first listed in the Artist field. Since everything in my Music File is an album how could it not return all the albums? That absolutely baffles me.

I’d like Naim to add a field for Composer. Actually, it astonishes me that the Naim app didn’t start out with a editable Composer field. And that it still doesn’t have one is inexcusable. It’s absence means that I’ve been forced to corrupt the Title field by putting Composer there. That means that I use the following convention for the title field
Composer: Title
For example, Puccini’s Madame Butterfly is entered into the title field as:
Puccini: Madame Butterfly
Or Verdi: Aida
Or: Korngold: Violin Concerto
Or: Mozart: The Marriage of Figaro

That convention forces the app to sort all the composer’s works together. All the Puccini albums, all the Verdi albums or all the Mozart albums, etc. it’s a great help for finding the music I want to play.
The addition of Composer would mean the app would have to offer three options for the app display, by Title, Composer, or Artist.

The app is actually not intelligent, it reads/shows whatever the server sends it, NAS, Core Tidal etc.
I have all the Composer features you suggest & more, they are included in Asset UPnP media server software in the NAS

Its low rating on the AppStore is mostly due to its flakiness.

I agree, reliability first. Also I do have an aversion to flashiness just for the sake of it.

Flakiness does mean having to restart the app relatively frequently. Some of the flakiness may not be entirely in the app but in the unit firmware also as occasionally I need to restart the streamer as well. It’s all ‘fixable’ but can be frustrating especially if you’ve got people round!

When it does work, it’s pretty good I think. Occasionally there’s a few things I think would be useful. For example, I’d quite like a more direct route to the ‘Clear queue’ option. But it’s not a huge problem having to navigate to the queue first.

Believe it or not, Naim actually released the UnitiCore with no metadata editing and the reason given at the time was that they didn’t think editing was necessary since they had such powerful album identifying software.

The truth of the matter I suspect is that almost no-one at Naim listens mainly to classical music and so the multiple problems and shortcomings that we classical music enthusiasts have to work around were, and to a large extent are still, completely invisible to the Naim developers. We customers were told that allowing editing of a composer field and a conductor field was “on the development road map”, but that was way back and I suspect that bit of the map has been quietly lost.

The app is actually not intelligent, it reads/shows whatever the server sends it, NAS, Core Tidal etc

Arguably that’s a moot point in this case, given that the Naim app is the only UI available for the Core. I do find it odd, though, that it’s so limited in this way as to make classical music hard to deal with. People used to complain about the Unitiserve in this respect, but at least it has user-editable fields for genre, composer, performer and conductor.

The first wish will doubtless be a tagging issue - you should check the tagging of those not found and you should discover that the artist field is somehow different to that in those found.

As others have said, other server software has the composer field. The answer is to use Asset or Minim on a nas, rather than the Core, or cajole Naim to add the field to the Core server. Whatever, it’s nothing to do with the App. The App just sees what the server contains.

One reason why I will never consider moving away from a NAS.
I’ll leave readers to guess the other reason