Does anyone have a definitive answer why the CD555 plays CDs, HDCDs but but not SACDs?
By that I mean it will play an SACD but only via the CD layer. If its an HDCD disc the player will light up to indicate this.
SACDs are reputed to be superior to basic CDs. I buy a lot of classical Chandos SACDs and sometimes wonder what I am missing, if anything. However SACD has never had a large uptake even before the siver disc was seen as history by the streaming guys.
Any thoughts?

Yeah…SACD functionality would have unleashed an amazing piece of kit…

SACD is pretty awesome, the best digital format I have ever heard, more “analogue” sounding and punchier than CD, and even PCM up to 24/192 (never heard higher resolution). I’ve got about 50 discs, mostly rock and jazz, plus a few claasical. I would like to collect more.

If and when I buy a new disc spinner, if it doesn’t have SACD playback, then that’s a deal breaker for me.

I would have loved to get into SACD - trouble is most of the music I like isn’t available in the format. My understanding is that most SACD players require additional hardware to read the SACD layer of the disc - perhaps Naim thought it best from a cost/development point of view not to bother. Also remember that early on, many SACD players were reviewed as great with SACD but only fair to middling with CD replay.

In their fledgling years there was a ‘format war’ between SACD and DVD-A and many manufacturers backed one or the other (Universal players came later). I think if anything Naim backed the DVD-A camp in their AV products. In the end, SACD sort of won out - if you can call it that. The Japanese are the main purveyors of good quality SACD players now, especially Marantz and Denon, though I am sure Esoteric could provide you with a very capable player should funds allow. Some US and European companies do still support SACD - Macintosh and EAR spring to mind - but the Japanese are still the major supporters of the format.

If you wanted to combine SACD with the Naim sound, a handful of SACD players can output DSD digitally and it may be possible to send that signal to a Naim DAC or the digital input of a Naim streamer.

I’m afraid SACD suffers the same issues that some hi-res files have and can often sound worse than their 16bit counterpart. I have both a CDP555 and the big Sony SACD 777ES running through an Ndac into a 500 systems. 99% of the time the CDP555 is better than the Sony.

There are a small number of SACD albums that do sound very good through the Sony but I nearly always default to the CDP555 to do most of my listening.

An interesting fact is that the Sony actually weighs more than the CDP555. Not many CD players can make that claim!

Oh…if I want to use SACD on the Sony I have to go direct to the pre as the Ndac won’t manage the signal.

I think it relates to the players not being able to output DSD digitally - it was a form of copyright protection. Some later players can do (possibly after Sony lost interest in the format?) but they are very model specific and it’s not always easy to do. Also it depends on whether your DAC will accept DSD files - not a given and perhaps the Ndac can’t?

If you were serious about SACD, then one of the current players from the manufacturers mentioned above would be the best bet, or possibly strike it lucky with a good used Sony ES series, though they are far from bargains nowadays.

In case anyone is interested, I came across this in another thread:

Show us what's inside Hi-Fi Corner

I like Luxman as a brand, their stuff is very well built, obviously made with a lot of care. Don’t know their amps particularly well but I do like their disc spinners and turntables. The D10 is definitely on my lust list if I ever win the Lotto, I really like its looks… [image] Steve “My house is really tidy” Guttenberg seems to like it as well: [FIRST REVIEW: Luxman D10X SACD, DSD, MQA player]

I don’t know but it may simply have been a choice to stick with 2 channel stereo rather than the 5 channel (SACD) format. I guess most music fans have systems optimised for 2 channels and most 5 channel set ups are optimised for movies.

I tend to find SACDs sound pretty good from the CDs layer anyway. It seems the producers of SACDs care enough about sound quality that they are generally well produced as CDs and often worth the premium.

Back in the early 2000’s when SACD and DVD audio came out, I was fully on board with the format. I bought a Denon DVD 2900 which plays both formats, plus regular DVD’s. I had a full 7.2 home theatre setup with Paradigm speakers. At first there was a section in Best Buy dedicated to the discs, but sadly after a few years it disappeared.
I own around 30-40 discs, and still think it is one of the best sounding formats out there, if mixed properly. Sadly, the Denon disc drawer started to get stuck, so I had to make up a tool to pull it open every time. I also own a Marantz blueray player that plays both formats. The Marantz outputs through HDMI, and the Denon only outputs the audio through 5.1 channel analog for the two formats. There are a few discs that I own that are exceptional in surround mode, Beck-Sea Change was always my favorite. There were only a handful of engineers that seemed to get the mixing right, Elliot Scheiner was one of the best at it.

I remember reading an early review of an SACD player (a Sony IIRC) and the format was trumpeted as being better than CD/HDCD but with other competing formats (e.g. DVD-A) and the need to buy new kit, noting HDCD is an extension of ‘Red Book’ and all you need is an enabled chip-set, it never really gained wide market traction, albeit it continues to feature today. And, IIRC, there were questions about the quality of CD replay in SACD players i.e. a high quality CD player was better than an SACD player at playing CDs. It seems the marketplace wasn’t ready for another displacing format.

Wiki is an interesting read on HDCD and SACD.

Anyone remember Elcaset, which was a larger compact cassette, designed to rival reel to reels? - this being a virtually still-born product.

There’s also Accuphase, the have rather expensive sacd/cd players.
Many years ago I had a pleasure to attend Sony sacd dealer event when this 777 system was presented with some über Sony speakers. For sure it was something! But I was young and not really experienced in hifi tings

Naim did do some work with SACD but in the end abandoned it as it was found there were some fundamental issues with the format that would have meant a great deal of resource dedicated to trying to overcome. Such resource was felt better spent in other directions, such as DVD-Audio which Naim preferred to SACD, and also towards making a better CD player, which of course became the CD555.

Very interesting obsevations on why Naim’s top player never took on the SACD format. From what I read from Forum posts and playing compatable CD/SACD discs I don’t think I am missing much if anything. Chandos dual layer discs on my 555 are really excellent and sit well in sound quality with my heavily modified LP12.
Looks like a 555 with SACD capabilty would have had performance issues and further financial costs.

I recently got a new Blu-ray player and deliberately shortlisted ones that would play SACDs. I’ve therefore been listening to my first ever SACDs (bought s/h from the usual outlets) and it’s been an interesting experience.

I’ve tried the usual suspects: DSOTM, Brothers in Arms and Jeff Wayne’s WotW. All sound extremely good, though I was slightly disappointed that the 5.1 mix had been done so tastefully. I was hoping to hear instruments and voices zipping around the room, but it was all very restrained for the most part.

I’ve also got a few classical one (lute discs, as it happens), plus a couple of Linn releases. These all sound very good - smooth, natural and transparent are the adjectives I’ll choose. What I haven’t done yet, though - but should - is A/B the SACD discs played on my 5.1 system with the equivalent CD layers played on my Naim system.

I was a little disappointed with the DSOTM (SACD) myself, you would think it would be one of the better discs in surround, but it was not.
Here are a couple of photos of my collection, the bigger cases on the left are DVD Audio discs, and the right side is my SACD collection.
The first photo shows what I consider to be the best sounding of the bunch, mainly the surround mix is superb.
Queen-A night at the Opera-DVD A
Linkin park-Reanimation-DVD A
Beck-Sea Change-SACD
Elton John-Goodbye Yellowbrick Road-SACD
Fleetwood Mac-Rumours DVD A is also excellent.
I urge anyone with a player to seek out these titles. 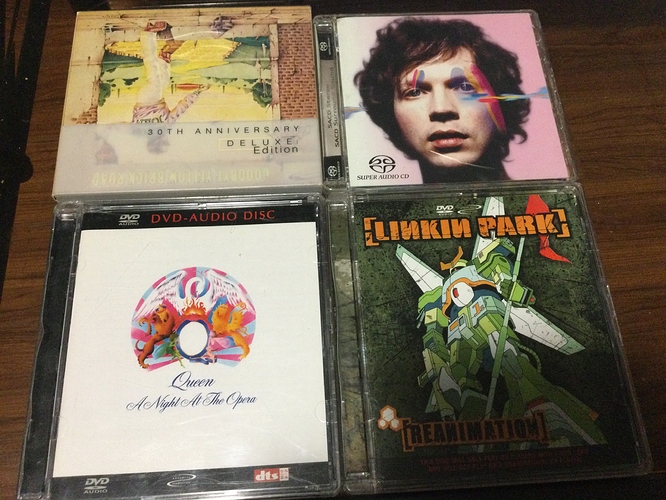 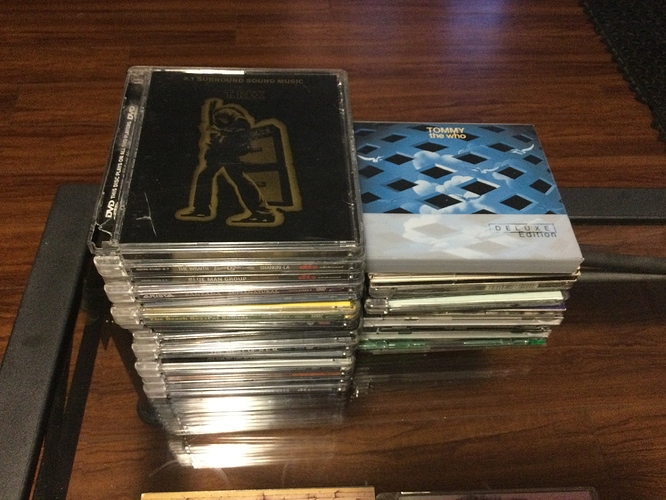 With regards to DSOTM surround sound - the SACD isn’t particularly good to my ears, unlike the Alan Parsons original 4.1 mix on DVD-A that he recently made available FOC (MLP) to download & burn to disc, which is great.

I’ve ripped all my two-channel SACDs/DVD-As tracks so I can play them through my MScaler/DAVE as either DSD or HD. The SACD tracks, particularly, have a great sound, a step up from their CD equivalents (assuming they’re the same mix/mastering, not always easy to establish!) The multi-channel mixes, played through my Oppo 203, as noted by others are very dependent on who mixed them. I really enjoy the Steven Wilson ones, which are generally excellent. Needless to say, they benefit from playing through a high-quality surround sound system.