Naim Fraim - is it worth it really?

I needed a rack to put my Naim stereo kit on, I bought a four tier Fraim secondhand at a good price so it was no gamble. I transferred my kit over from an Ikea Besta universal furniture thing.

The tripod design of the Fraim makes sense and it is quite easy to set up and level and the wife thinks it looks ok.

I can’t say that I noticed any difference in sound though.

Worth noting that decouple shelf racks like Fraim cannot be safely used in parts of the world prone to earthquakes. Or rather they can until the first very strong jolt.

Some of us want such racks but simply cannot.

Fraim cannot be safely used in parts of the world prone to earthquakes. Or rather they can until the first very strong jolt.

We live in the less earthquake prone zone in NZ, but I’ve still be woken by rumbles this year.

When I had my glass shelves made I was going to use the Naim cup and balls, but my dealer recommended against, more due to children knocking the units off the shelves.

I asked why Naim make kit that is apparently hyper-sensitive to environmental differences.

I’m sure Fraims are good, but so many things about Naim have me scratching my head since I started following this forum.

HouseholdNaim,…But that is the positive thing

.
You do not have to do,.or buy everything that is told about here.

But you get the knowledge here,on this forum,.what maybe makes a difference and not in soundquality.
Then it’s up to you,how far you want to go with your new knowledge.

Some are satisfied,.and stay at a level of 75-80% of the music-system’s capacity,…others want out 100%.
You decide,…but it is important that you have the knowledge to be able to decide.

And that knowledge you get,.among other things,on this forum.
But of course also from your dealer.

But you get the knowledge here,on this forum

Perhaps @Peder, it is likely that you might find relevant information here on the forum, but knowledge comes from your practical experience of putting the information into practice. Certainly a lot of people have travelled along similar roads and their experience is valuable and thanks to the forum it is being shared, and is no longer the sole domain of the dealer.

Not being born with a silver spoon, I took a path that was similar to yours. Picked up a four-pack of Fraimlite from the Netherlands, and three months later took a trip to Canada to secure a three-pack of matching Fraimlite. Being an Active-fan it just made sense to invest in an rack that was not limited to the number of black boxes one chooses to add. In my case, 80% was aesthetic beauty.

Fast forward three years later, and add a Corian shelf under my CDX2, and Naim’s dreaded hum has reduced over 50%.

Who knows, perhaps the shelf sitting upon a set of naim cups & bolts shielded the CDX2 from my HCDR which was located beneath it!

Point being, one can save a boat load of

by tweaking their system, or just invest in a full loaded Fraim.

Enjoy Your Music, The Why!

Some like what the 555PS does, and buy it. Others prefer the XPSDR, and buy it. Others prefer the bare 272 and buy nothing. Exactly the same reasoning applies to Fraim (or any other rack). All I, and one or two others, have done is recount our own experiences. Those who already own Fraim seem to be almost guaranteeing an audio improvement to those asking for advice. I am simply pointing out the sense in trying before buying, as, in my own personal experience, improvements are not guaranteed. Never have I said, or implied, that Fraim buyers are wasting their money or ‘soft in the head’.

Sometimes people seem to be unable to accept others may not agree with them. It really isn’t a question of right or wrong, simply different experiences. As ever I stick by my maxim of ‘try before you buy’!

I said virtually the same as your penultimate sentence in the post from which you quote. People can do what they like; it doesn’t bother me.

but knowledge comes from your practical experience of putting the information into practice.

I do not know how many thousands of hours,.I and others here,have practically tried,tested etc,etc.
It is a knowledge and experience,.which cannot be bought for money.
But it also applies to have the ability to be “openminded”.
Too many rely on technical explanations.

But in the end,.it is how it practically works in your music-system,connected to the room that matters.

I have helped to installed a music-system for a Professor of acoustics.
He did not get it to play well,.despite all his knowledge in the acoustics…and all the equipment he had access to.
I need to say he was very satisfied with the result.
He was later also a member of our group here in Sweden.

So it’s like you also said @Camphuw…
“knowledge comes from your practical experience of putting the information into practice.”

The last thing I,we discover,.which I did not believe had any meaning…
Is,.that it is important for the soundquality, how hard you pull the powercord into your contact,…see picture below.

I never thought this would have any meaning,.so you learn something new all the time.
This was an advice from the Swedish distributor of Oyaide-contacts. 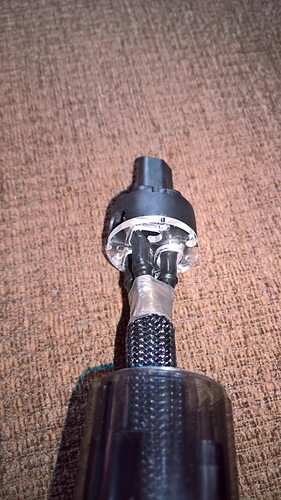 Isn’t one of the main attractions of Naim (particularly the higher end stuff) the ability to tweak, refine and optimise performance through advice / support from dealers and from things like this forum?

It would be pretty dull if it was a case of plonk it down anywhere, plug it in and it always sounds the same.

I’m pretty sure that the vast majority of folk who are attracted to this level of equipment actually enjoy the tweaking etc and if that didn’t exist neither would this excellent forum.

I’d say that the appeal of Naim is that they have done the hard work for you.

The Fraim is designed to be used with their equipment as are their cables. You don’t really need to go outside Naim to get the system working at its best. This is unusual and people of other brands tend to resort to endless tweaking with the latest third party product that is in fashion. It generally isn’t necessary with Naim as they design the whole system.

Now if only they made speakers as well…

it’s the OP rack. I agree with you, not the best for audio.

I like it Peder …when I did my professional acoustic exams my professor was sceptical about my research on correlating subjective and objective assessment of loud speaker stands. He was more interested in developing a vibration system to measure net-calls at Wimbledon than the quality of music.

plonk it down anywhere, plug it in and it always sounds the same.

I would happily settle for, “plonk it down anywhere, plug it in and it always sounds at its best”.

Me thinks this is not too much to ask from a professional purveyor of expensive audio equipment. That is, design out any sensitivity.

Thanks for the replies.
I think some serious bribery starting with flowers moving on up through to chocolates. If that fails, spa weekend for her and her mother!!!
Gordon

My mother use to always say, it’s not what you say, but how you say it!

Of course, I’m a work in progress!

But I remember not to long ago, when the Big fish was a fan of other British racks, but he ultimately took the bate and is now sporting a beautiful system that is dust free unlike mine and DB’s!

The beautiful thing about the Forum, not only is it informative, but educational!

I miss you HH, hope all is well with your health, and do me a favor, try not to be so ruff on Me!!!

The three words I learned from you:

My vocabulary is burgeoning!

Enjoy Your Music, The Why!

PS. Where is the honor in being right

You don’t need the @ thing if it’s a direct reply. It’s only needed to specifically draw people’s attention.

I had a Fraim in times past when I had my 552 based system, and then sold it when I downsized. After a gap of over ten years during which I tried various other racks I finally bought another Fraim, and I’m very pleased with it.

By the way, I’ve never used the word ‘apodictic’ and had to look up what it means.

For the OP - it’s well worth looking for used examples of Fraim. I bought my base and four shelves, all boxed, for £1,250.

I know, another gentleman used it, and you responded! The gentleman was very smooth and stated how he tried not to be apodictic! From that point on, I’ve been working on my delivery!

Thanks for the pointer, I hope I see the arrow pointing at you!

(You don’t need the @ thing if it’s a direct reply. It’s only needed to specifically draw people’s attention)

I like it Peder …when I did my professional acoustic exams my professor was sceptical about my research on correlating subjective and objective assessment of loud speaker stands. He was more interested in developing a vibration system to measure net-calls at Wimbledon than the quality of music.

@Camphuw,…Well then you were almost on two different planets

.
Interesting that you have that experience.

It would have been interesting,.to hear his thoughts on the differences between Linn Skeet and Naim Chips.
This given that he was sceptical of your research of loud-speaker stands

Im in the same boat as the OP, i also use a stands unique AV stand for my gear but the system has arguably outgrown it. Its a nice stand with good quality glass and accomodates my 7 box count plus sky plus xbox well. I can remember a speaker demo where the dealer expressed to me he felt the FRAIM added to around 10% of the quality of sound we were listening to which seemed a reasonable assessment to me. At present i dont have a dedicated listening room its a family room. Most likely im not wringing the the best possible performance out of the system but it does sound fantastic. Im not in a rush to cross all the t’sd and dot all the i’s. More cash down the line should probably go to a DR for the 500 or a second 555PS but I sold off the guts of my second system to fund the ND555. Fraim is beauitful looking and reeks of quality and it is on the list but its not an itch I feel i need to scratch frantically. My current stand is doing an adequate job that im sure can be bettered but its not hindering my enjoyment. A bit of spare cash and a fleabay bargin could change that but it hasnt so far… perhaps my priorities need readjusting or its simply better the devil you know. Comparing the sound impact of different hifi stands is the suff of nightmares to me, logistically speaking