Hello,
I came across such a strange divice as Naim NNP02. What actually it is, and why would I need it (or why not) in my system based on Nait XS2 and self made streamer?

Is it some kind of all-in-one?
Thanks for replies!

It was part of the old Naimnet kit that ran on the Netstreams Digilinx system.

It’s a small network enabled room amp that was designed to be small enough to hide away.

Bottom line, without running a Netstreams multi-room system, it’s irrelevant to you.

NaimNet was the forerunner to the Naim streamer range, and the NNP02 was more or less equivalent to a Uniti player. I think it has a line out, in which case you could, in theory, use it as a digital source into your Nait if you didn’t want to use its built in amp.
Possibly irrelevant, as I’m not sure what control interface would work with it.

Ha! Must have been when they thought Linn were onto something with Knect and Sneaky driven multiroom. That tiny sliver of time when that existed and before it was blatantly obvious that DLNA would make proprietary multiroom hardware irrelevant.

Possibly irrelevant, as I’m not sure what control interface would work with it.

Unless you’re using a Naimnet or Netstreams Digilinx Streamnet system, it is irrelevant.

I own a NNP01 which had the network electronics gutted and became essentially a NAP200. I believe the amp was leftover inventory and with the demise of Naim Net it was factory modified. One oddity is it has a NAP250 style XLR output. It was shipped with a dreadful non-naim XLR-RCA cable. I quickly replaced it with proper factory DIN-XLR which made big difference.

I had noticed both the NNP01 and NNP02 products while researching. They were often advertised as being useless unless setup properly into a Naimnet system. Just a thought - I wonder if there is a market for these to be converted into power amps by some of the specialists or even DIY? Otherwise it seems a bit of a waste.

I think some of the Linn stuff is similar and that’s why it is so cheap on eBay etc.

That undoubtedly falls outside of forum rules.

Not sure if a Naim dealer might be able to permanently set it up on one input at fixed gain. Probably not worth it compared to second hand old-generation Uniti products though. The SU and UQ2 are real bargains now for what they can do.

This document might help shed some light on the subject: 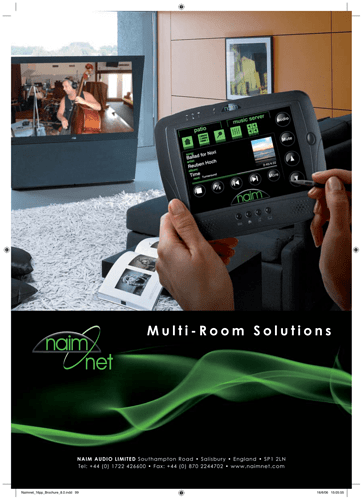 I included the link because I cannot see how to upload the actual document here.

Crazy to see Naim Net products that never came to fruition. Bummer it did not work out… I bet it sounded better than the competition.

The “networked house sound” and “home theater” world died after the last recession. Home pods and Muso’s replaced the concept.

I’ve no idea how successful NaimNet stuff was in itself, but it’s what evolved into the first generation streamers and servers that were a big success, so maybe not wasted.

Does anyone know which products actually made it to market?

Looking through the document, many are the ‘normal’ range but with RS-232 control added to work in a networked system. There clearly are specialists Naimnet products, of which the NNP01 and 02 must have hit the market as used examples come up from time to time. The room players and servers look interesting - I assume the latter being based on HDX technology and research into the former paved the way for the streaming products that Naim have become famous for. As ChrisSU suggested - perhaps not all a waste in the long run.

The room amps, NS01 and NS02 servers and tuner were produced along with RS232 modules for integrating the regular Naim kit. Ultimately it sounded like great idea, but was pretty niche, and eventually upnp streaming won the day. The investment in Naimnet was not all wasted as it gave Naim some much needed experience, first with the HDX, which was a direct development from the NS01, and then with the Uniti, and then the first generation network players (NDX etc…).

I assume the latter being based on HDX

Actually it’s the other way round, as Richard says. The NS01 came first, and is very similar to the HDX without the screen. It was only discontinued relatively recently.