n-Sats deserve a seat at the table…

Unfortunately many of us will not have had the opportunity to listen to all of them. The best i ever heard were dbl’s…vs ibl/sbl, the latter i eventually owned.

I only have N-Sats and N-Sub, both of which you left off your list!

I personally owned Allae, IBL and SBL ( Mk1 and Mk2). For many years I had the SL2 now and it seems to be a symbioses of the last two. Had many tempting moments, but just can’t let them go.

DBL is something on it s own, if you have the space. Would love to have heard the NBL once.

Interesting question, but difficult to know what criteria to use when judging speakers, given that they can be as diverse as the systems that drive them. I imagine the speakers listed can perform equally well in some systems and not others. I was listening to Allaes for years and thought they were all I ever wanted until I moved the system to another listening room and I upgraded. Here are just 4 of the specs . . . . 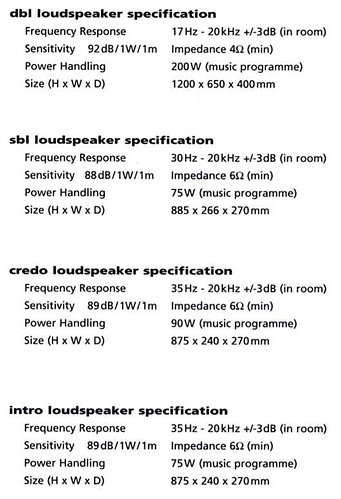 I have NBLs and allaes, and have heard SL2s, SBLs,S400, pre production S600s and DBLs but even of the two I own not in the same system. The DBLs were with active 500s and left a lasting impression but it was a Naim in store demo for the superline and HDX launch, I didn’t have the space until recently, nor at the time anywhere near the funds. I could run a pair passive now but I’ve yet the hear how the NBLs work in my current space and I hope to move again in a year or so.
The DBLs crumbling bass drivers and damping are a little off putting as anything bought now will likely need restoring.

Apologies. Can’t edit the poll now and I doubt @Richard.Dane can either. Should have included the little fellas.

I’m afraid not. Only option is to start a new poll.

@artist I recognize that artwork!

Having said that, I do have a fondness for SL2’s.

Thank you Richard but it would be unfair on the people who have already left a comment or voted. The N-Sats folks will just have to forgive me.

It would have been interesting, or perhaps telling, if the poll had included speakers from the Focal range.

That would open a can of worms. I don’t consider Focals Naim speakers. They are a different brand altogether with Its own DNA.

I know, it was a controversial suggestion, but I’d like to see where they ranked in popularity stakes. Unfortunately, popularity can’t be measured in numbers of units sold as many Naim Audio speakers were manufactured in limited numbers.