Naim Timeline - A Work In Progress

To keep it simple initially, just in terms of ‘Eras’, to start with.

More to come, if there is interest…

This assumes it’s not an upcoming April Fool!

Has there ever been a book about Naim and it’s products and history - I know there is one about Rega and also quad. I’d certainly buy it!

« Naim DR technology was first introduced to our separate range of power supplies in 2012. It was then applied to our flagship Statement amplification system and adapted to handle the higher current demands. Now we have introduced the benefits of this technology to our core range of power amplifiers, providing the smooth, stable and low-noise power supply we know is vital to audio performance. »

That looks about right. Note that the transition from Olive to the current look came first with the NAP500 as you mention although it just squeaked into 1999, and then the 5 series arrived next in 2000. The rest of the range transitioned to black in 2002.

What of Statement, New Uniti, and Mu-So?

There was a dealer handbook. Over the years I’ve expanded and updated it but not published or released it as it’s kind of a constant work in progress.

This assumes it’s not an upcoming April Fool!

I think the French are very keen on their April fool jokes. Eifel Tower decapitated etc….
Surprised we don’t see a black series box decapitated to form a new tin shoe box series or should I say a tin biscuit box series

Apologies. That is, of course, correct. DR first appeared in the PS’s in 2012.

I started this as an actual Timeline and worked from the Power Amps, with some info from the Pre Amps. I didn’t look as the PS’s…

I will try to make the Power Amp timeline ‘pretty’ enough, to upload…

Thanks for all the corrections & comments, so far…

- appreciate what you mean by it’s always ongoing but that’s the case with many things - has there ever been thoughts of a book - I did see on the forum where some members had put photo’s of old brochures and manuals etc - have Naim kept copies of that sort of thing? I think it would be great to have sat on the coffee table - especially as Naim don’t just follow the usual trends.

Here is my attempt at a Timeline for the Naim Power Amplifiers: 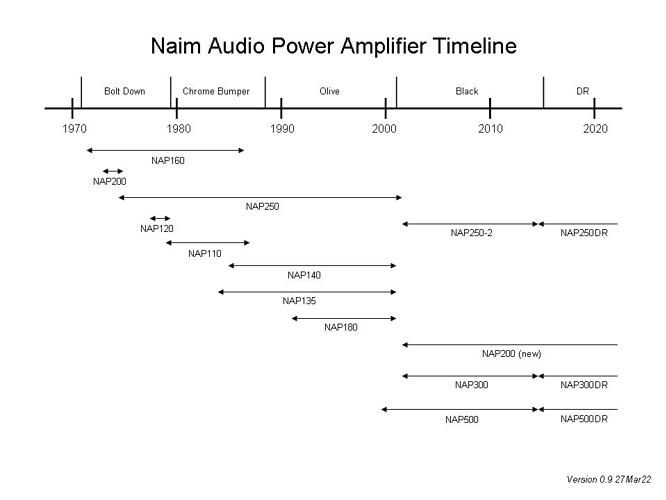 And please don’t forget the latter little one - NAP 100?

And please don’t forget the latter little one - NAP 100?

The 200DR doesn’t get a mention, by Naim. AFAIK, its only the Pre Amp Supply that changed…?

I know my 200 is non DR but the website quotes “current” spec as having DR - unless I’m reading the wrong bit?

The 200 is a conventional, non-regulated power amp - so the amp itself cannot be DR. But its Pre Amp PS can be… And thats what changed, I think…

The 175 is in the Naim Product History, but none of the others are.

The NAP250PRO was a version of the NAP250.2 that Naim built at the behest of the BBC for high performance studio use. Some were sold to other professionals too. Not many made overall though. It had balanced input connectors and Speakon speaker connectors.