Yes Darran has said it will have to go to Salisbury

DR ain’t happening even if available. It would cost me more than the unit + service.

Got mine as a 2001 unserviced…it still sounded amazing! I bit the bullet and did the dr upgrade and servce…

If it happens it will be with a service so that’s when the decision has to be made.

When mine went off for DRing and service I put the 250-2 where the head unit had been, previously it had been at the bottom of the brawn stack where I put the 500 power supply initially. I couldn’t be bothered to rearrange the speaker cables while the service happened. I actually found I preferred the 250, something I put down the the 500 needing a service but when it came back I still preferred the 250. My first thought was to get the Burndys off the floor so I moved the 500ps to the top place among the 4 power supplies but this was only a minor improvement. My CDX2, powered from a 555ps was above my 552DR during all this, next move was to swap it with the 552 so that the 552’s base was roughly level with the top of the 500ps rather than the 555ps with the 500ps a shelf higher. This did the trick and the 500 started showing its worth. It wasn’t CDX2 higher than 552 because that was fine when using the 250 but I suspect the two big ps overlapping the 552 was the problem. It might have been some detail of Burndy set up instead but I’ve had a faulty 500 Burndy where the sleeve had escaped the strain relief clamp and that wasn’t causing the lack of life.

I then had the idea of reversing the ps order to that of the head units but found the superlines supercap was better on the bottom shelf than the 552ps but the superline didn’t react so badly to the 500ps looming over it from the adjacent stack. The Burndys mostly hang at different distances so crossing them was no problem once I’d worked out which went in front of which.

Thanks Yeti this is something I’ll certainly pay attention too.

Would anyone be so kind as to confirm if the height of the 500 is 160mm as shown on the website? It may be an optical illusion but it looks taller that this compared to the standard height units in the pics.

Would anyone be so kind as to confirm if the height of the 500 is 160mm as shown on the website?

I asked the same question some time ago.

Thanks it looks more than twice the height in pics!

When I changed from a 300 to 500 (both non DR at the time) the 500 added a very considerable amount of power and control over my then nbl speakers. The 500 is a heavy brute and, provided your back can take it and you have sufficient headroom I wouldn’t hesitate to recommend one to you - provided it has decent provenance/ you have a chance to hear it perform. Servicing times at naim have been a bit extended of late so ideally I’d prefer to get the amp and enjoy it for 6 months or a year until the supply of components frees up (hopefully!). Good luck with your search.

I have mine on a double height fraim shelf and I think you can get away with the middle height legs. (And a back support when lifting)!

Thank you Peter that’s much appreciated.

For the question above

My hi-fi amp history started with a QUAD 22, then 33, then Naim 250, pair of 135s and Naim 500. This was the dealers ex-demo unit. Perfect. The 500 cost way under 10K. The march of time!
I was sold on the 500 when at a Naim factory open day a guy with active DBLs driven by a 6 pack of 135s changed to passive driven by a pre DR 500. He didn’t go back.
When I had the 500 DRd I borrowed the dealers 300DR. Initially impressed but missing the amp at Salisbury.
Return of the 500DR including a service. About 50% of the cost of the initial 500!
Could go on. suffice to say: less hi-fi: more music.
If you have the funds then worth serious consideration.

The cosmetic change was the change in logo intensity (lowered). Earlier units could be updated here but this was something best done during a full service as the head unit logo was buried deep inside and only accessible with the amp taken apart.

IIRC (I’m sure @NeilS will confirm or otherwise here), the Resistor lift and the protection update were both undertaken automatically on any early unit at the time of a factory service.

I have an early 500 which was serviced November 2016. The work is described as “Service. Changed tants, updated the protection caps and fitted lifted resistors.”

I always wondered why the logo lights are much brighter. Shame they weren’t changed and they are bright.

The similar vintage 552 was serviced at the same time and had the logo changed! The logo was previously described as purple tinted.

Here are the respective attractions of each as I see it; 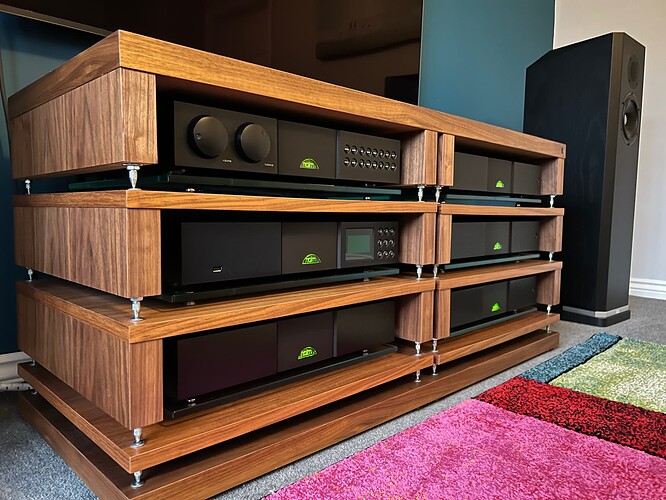 I always remember listening to active kudos 707’s with a few nap300dr they sounded really lovely, but a bit energetic and trying a bit too hard for my liking. Then they put the 707’s over to passive with a single 500 dr, to me it had more control, gave a more enjoyeable performance. As you say tough choice……i would take the 500.

How can one listen with active speakers fed by a 300DR?

How can one listen with active speakers fed by a 300DR?

I suspect ‘a few’ may have remedied Gazza’a statement.

Still don’t get it