I just purchased my first Naim streamer, an NDX.

The product is not listed on the Naim Android app front screen and a scan doesn’t find it. Am I right to think there is no Naim app that supports the device?

If so, how can I update the firmware or see such techy stuff as wireless network strength?

Also, how can I create playlists that the streamer will see? It does not see any of the ones I have created for my Squeezebox (now Logitech Media Server) setup.

Sorry for so many questions.

The app should work with the NDX. Is it new old stock or 2nd hand?
Is the WiFi aerial attached?
Try manual setup by IP address.

First of all are you sure it is connected to the network? If you download the Network Analyzer app by Jiri Techet from the Play Store and perform a LAN scan, can you see the streamer in the list of devices?
Second, are you using any Wi-Fi over mains extenders on your network? They can cause problems with device discovery that Naim streamers seem particularly sensitive to.

Thanks for the help.

It’s an eBay purchase. A minor bargain as it looks like it’s never been used.

I’ve reset it and set up on my wireless network using a static IP. The network function works and I can browse all the flac music on my Logitech Media Server.

My issue now is only with the Android app which looks decidedly like it does not support the NDX… it’s not listed as a supported device on the home screen and it can’t find it by IP address. I’m aware the app has been updated recently so I’m wondering if Naim has dropped support for the NDX.

In case it matters the NDX sees my network quality as very high (mostly 100%) but my signal level as only 50%, which is surprising as that WAP is only 4 metres away from it with just a (joist) ceiling in between. This with the super third party antenna too.

The NDX is still listed as supported on Naim’s app page: 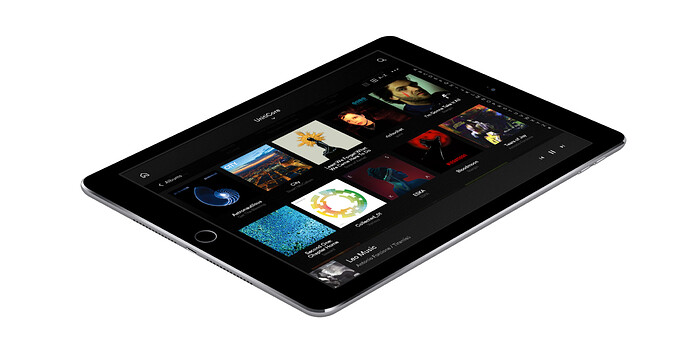 A world of music at your fingertips.

Now, the Naim website is not famous for being always fully up to date, and in this particular case the page lists only the old streamers and none of the new ones, so who knows, but I very much doubt Naim silently dropped NDX support from the app. And if so, I would expect there being much noise on the forum.

Can you see the NDX in the configuration page of your router?
If it is connected with wifi, can you temporarily connect it with a (long but cheap) ethernet cable to see if this changes things?

Thanks. Perfect reply. I have a complex wireless network due to many external walls inside my house and a few outbuildings. So I use a number of Wireless Access Points and Powerline Adaptors. Each WAP used the same SSID for each of the two channels (2.4 and 5 GHz) but I set channels apart so they do not interfere with each other (not too sure this is the best idea though). Info for you: Where this Naim device seems unusual is that it lists the SSID of all the WAPS it can see so I get to choo…

I suspect this is why you are having issues, if you have 3 distinct wifi networks though they use the same SSID. If your phone and your NDX are in fact operating on different wifi networks, they cant see each other.
I understand why you have these networks, and our house suffers from the same (high density block construction with high attenuation of wifi signals as a consequence) but a single unified mesh wifi system would solve your issues.

The app does definitely still support the NDX. The reason it’s not listed on the first screen of the app is because, like all the older streamers and Unitis, you don’t set it up via the app. If you tap “find my rooms” it should just find it. But the streamer and the phone do need to be on the same network as Robert says. Mind you, lots of home networks are messy but work fine. It’s also true that some that are messy don’t work at all.

To do a firmware update is a whole different ball game. Once you have got everything working and you know what firmware you are on, come back here and someone will tell you what to do.

All 50 odd wireless devices in my property can see all other devices regardless of which of WAPs they devices are connected to. There are no issues there (only one DHCP server, with all WAPS passing served IPs form the DHCP server and all devices on same subnet). In this case my phone was connected to the same WAP as the too.

The only issue I have (now I’ve figured out how the NDX works) is that the Naim Android app does not list the NDX as supported or see it when I enter the (dedicated) IP of the device. It looks suspiciously like the recently upgraded Naim Android app does not support the NDX… why else would it not be listed on the home poage when so many other Naim streamers are? It’s be great if you could confirm the Android app did still support the NDX. Then i’ll persevere and try a wired connection direct to main router/WAP.

when so many other Naim streamers

The app only lists the current models. What happens when you enter the NDX IP address in a browser? I wonder if someone has updated one of the settings which is now impacting you, have you performed a factory reset?

This is for the NDX2, but the browser access allows you to “fiddle” with the network settings. Yours might contain settings that are not valid for your network if the previous owner has changed the settings for their own needs. 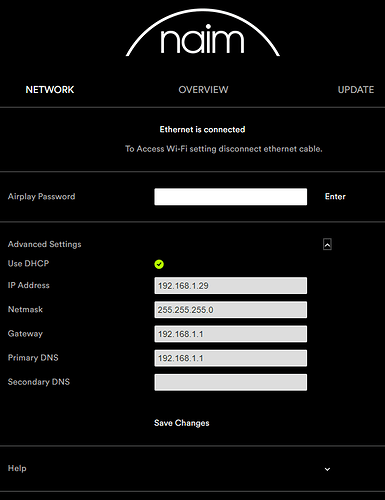 The app only lists the current models

Because they are setup via the app and the old models are set up without the app.

It’s true it’s been a while since I added my uq2 to the naim app, I cant recall exactly how that worked. I assume there was an “add room” option which is now simply “+”.

So I have two SuperUnitis, a Unitilite, a 272 on my network. Also a Nova that I bought secondhand and was found immediately by the app once I plugged it in and turned it on. Also I have a Core and over the months I have had two other Cores here that friends brought here for different reasons. All of these appeared in the app when they were powered up and on the network.

I really do know what I am talking about. The app not seeing the NDX is not because the app somehow has to be told about the NDX (because it doesn’t!). It’s because the NDX is either not on the network yet or because it’s faulty. The first thing to try would be an Ethernet cable between the NDX and the router or a convenient switch/WAP.

Thanks for explaining the stuff about set up and the app. Now I’ve got that and know the app supports the NDX I’ve wired the NDX into the main router. After trying to switch the network settings to Wired (which is impossible, is confusing and led be to believe that I needed to reset it to change to a wired network) I pinged it’s IP from my Android phone and indeed it’s on the network, just like that!

But now two more issues I can’t seem to fix.
1). The Naim Android app finds the NDX via Rooms but then there appears there’s nothing I can do at all but use the back button which exits me from the app. There’s nothing else to click on the screen apart from a cross for deleting the NDX from Rooms

I’m wondering if ringing Naim tech help might be the best idea (esp as my two posts here seem to have converged! - sorry about that).

You are nearly there!

Once you have the NDX showing in the rooms screen in the app, you just tap the NDX graphic. That takes you into the menu.

As regards switching to Ethernet, it’s automatic when you plug the network cable in and the act of connecting via a cable just turns of the NDX’s WiFi.

When you are in the NDX home page screen in the app, select upnp by tapping the icon and the app will give you all available servers.

Thanks very much indeed. And all of a sudden the whole thing makes sense!

I had tried clicking the NDX graphic before but it appears I was too impatient and exited before it had shown the next screen. Now I’ve done that once it seems instant.

Before I take it back to the wireless network and see if it works… how can I update the firmware… there is nothing i can find in the app to help?

Looks like 4.7 is the latest? I can find lots of chat about updating but not the instructions. Have Naim published any anyone can provide a link to? Thanks.

There’s a download with instructions in the zip file here

I have a current generation streamer and firmware updates are done over the air, so I’m not sure if the instructions in the zip file on that page are the only way of updating the first generation streamers because it looks like an almighty faff. Hopefully those familiar with 1st gen streamers can pitch in if there’s a better way of doing it.

Got it and downloaded the firmware…

RS232??? Ye gods. Why? Just to be different… or do Naim sell dedicated USB to RS232 cable at Naim prices? Urgh… and I have bags and bags of cables here… a whole lifetime’s worth of audio, network and computer cables in fact, but do I have anything with an RS232… do I f***!

Before you buy, does your NDX have a RS232 or a mini USB on the back? It’s only the oldest NDXs that had RS232 sockets. Btw Naim don’t sell the update cable themselves. Also note that the NDX must be connected to your router and so must your PC, because half the update is delivered over the USB cable and the other half is delivered over the Ethernet cable (and your NDX needs an IP address for that to work).

It’s definitely worth doing the 4.7 update, especially if you are intending to use Tidal.

Thanks. It’s definitely an RS232… although the shape is worryingly similar to a mini usb… as it says so above it.

I want Tidal so will upgrade once I have the correct lead.

I am rebuilding a Naim kit I flogged eight years ago when I took on a overly large house and land development. So far I only have the head unit and the speakers, so it’s going to be a while before I install the NDX install it’s final resting place. When I get the lead I’ll wire the NDX into my main router and use my music PC for the install (also wired into the main router), avoiding powerlines and wireless connections.

And thanks very much for your help David. It’s all been spot on.

I’m happy to help further if you need. There are lots of people here who have done the 4.7 update (and lots of updates before that including multiple betas) on a legacy streamer so just post if you have an issue or a question.

Incidentally the WiFi on the NDX is not very good at all, so if you can contrive to provide an Ethernet connection for it in its final position, you will never regret it.