Hi Community I have a problem
with Qobuz (high resolution Abo) and Uniti Atom. From time to time the connection breaks, the transmission stops. The transfer rate information disappears on the Naim app (see photo). It doesn’t happen daily, but frequently and then 3-5 times in the evening. The system then stops responding and it is not possible to jump to another track. After a few minutes it then continues to run by itself until the next interruption. The Atom is connected directly to the router in the basement via Ethernet (no switch, no NAS, only Qobuz via Naim app, and web radio that runs without problems). The problem also occurs when connecting via WiFI.I use the new Firmware. When the interruptions occur, other devices in the house continue to run and the network is stable. My dealer said it wasn’t Qobuz and recommended a factory reset on the Atom. But if I do that, I lose all presets…
Any advice or pointers would be greatly appreciated 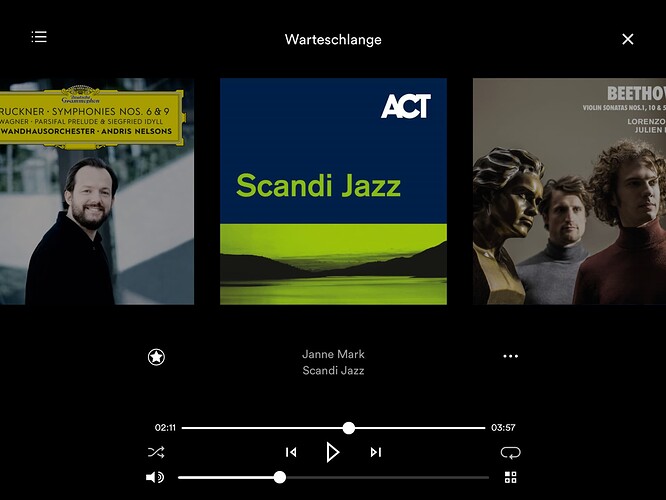 You should follow your dealer’s advice. It’s also worth rebooting the router. Make sure you are on the latest firmware.

Yep. Sounds the same as my problem. Next time it does it I’ll let it continue and see if it kicks back in. I haven’t been so patient as to wait to see what happens.

Your bandwidth must be larger than mine. I can run Quobuz in hires though my wife’s HD TV drops out. The same is the opposite. If Shelley is watching in 4k. I can do no streaming. I have a CD5 XS and a Linn LP12 for backups. As this was a trial. The TT and Cd players are the main sources.

Thanks @Mark84. Then it seems to be the same problem. May be @Richard.Dane will merge this Thread with yours (NDX2 keeps freezing when playing Qobuz).
@hungryhalibut Thanks for your advice. Firmware is 3.8.0. Factory reset is an option. The problem are the presets, which include around 300 titles. They are stored in the Naim app and in the Qobuz app. Do you know if they are lost during factory reset or if they can be saved? I streamed via Qobuz app for the first time today via Apple Air Play. It works, but sound is worse than via Naim App and the transmission is not completely stable.
@Gigantor: i have almost around 450 Mbps download speed in my living room (Fiber PON account and router in the basement). I am not an expert, but I have read that music streaming does not need very much capacity. My wife can always watch movies via tablet without any problems. I hope to get a new fiber router with Wifi 6 next month, this mainly to improve WiFi coverage in the house with an additional access point (we both work on 2 floors in home office). I don’t know if this will improve the drop-out problem via ethernet too.

Sorry, I don’t know where they are stored. You probably need to just go for it. Losing the favourites has got to be better than constant dropouts. Have you tried turning off the streamer and then restarting the router? Let it boot up and then turn the streamer on.

Remember that it is important to try the “Power off AND unplug” your streamer for say 10-20 mins. This has solved issues for many in the past.

Thanks very much and nice sunday evening

Your Qobuz favourites are stored in their servers and accessed via any device or app you use. So reinstalling the Naim app or factory resetting the streamer will not lose them.

Thank you for this positive information. I restarted the router today and also restarted the Atom. Now it is running. If dropouts occur again, I will carry out the factory reset and report back here.

I have been running a NDX2 for a few years without any issues. I do make playlists using the NAIM app and have had no problems.

My NDX2 is connected to the internet and have never used WiFI and music from my NAS, Internet Radio and Qobuz has worked without issues.

I was having this issue streaming Qobuz and Tidal via Roon. 2 to 3 tracks then locked up. Had to power cycle the Ndx2. No issues for 3 days since using the Naim app. I was going to try Roon again today as I do enjoy the interface and hopefully it was a glitch.

Never seen this issue with NDX2 and Roon

Tried Roon again this evening. Same issue. Few tracks in and it stops playing and loses the NDX as an audio zone. The only way to get Roon to see the NDX again is to power cycle the unit.
Zero issues with the Naim app.

Very odd, no idea because I have never encountered this

Yesterday I have made the factory reset. Now the Atom is running without dropouts. And I can still use the Qobuz Playlists, that I had before. Fingers crossed that this problem will be over definitly.

With WiFi it seldom is. It’s too variable to count on for delivery of media that’s sensitive to changes if your in a built up area as so many other users of WiFi . Wifi bandwidth is up and down every second, other users WiFi next door affects your WiFi performance, every WiFi device in your house affects WiFi performance and those beyond to.

It’s not about internet bandwidth but mainly latency and what is know as poor airtime . If you only have one WiFi pont in the house and lots of WiFi devices then you get a choke point. Wifi can only send and receive data from one device at a time this is referred to as airtime, some devices hog airtime starving others. Poor airtime causes latency which audio streaming is very sensitive to. It drops out of the threshold for too long you will get dropouts or playing stops as it essentially stops talking.

This is compounded by every other WiFi router in your immediate area taking airtime from your as they all try and communicate with each other and each device which also adds more latency.

Naim kit has a largish buffer to aid this but it won’t help in extremes.

Best check you WiFi setup to see which channels are better to use and don’t clash as much with neighbours this will help free airtime. Adding more WiFi points can also help as the load is more evenly distributed but endure each runs on its own channel.

Wi-fi is a perfectly good medium for streaming hi-res music files, but like everything else in hi-fi it must be set up properly.
From my ISPmodem I use a TPLInk AC5400 Archer Triband router. It has a number of high performance features that make for a very efficient, very fast and very reliable transmitter. One of its 2 5GHz bands is dedicated to audio with no other clients interrupting or generating traffic. At the other end I use a wi-fi bridge to catch the transmission and reconstruct the analog version of the packaging system for transmission along an ethernet cable to a switch, whose sole job it is to clean, retime and resynthesise the analog data stream. That clean signal is sent to a further switch with much higher specification whose job it is to further uplift the quality and timing of the data stream. In a kind of compound interest fashion, the improvements from the first switch mean a much cleaner, more accurate input to the second switch which adds its contribution to sound quality. The better the bridge’s and switches’ power supplies, the better the overall presentation of the music.

No drop outs, 100% reliable, kick-ass sound quality.
Compared to the price of most components, getting better sound quality from a network is not as expensive as you may think….its mainly down to care in installation, the right components and proper, sound quality enhancing architecture.

At the other end I use a wi-fi bridge to catch the transmission and reconstruct the analog version of the packaging system for transmission along an ethernet cable to a switch, whose sole job it is to clean, retime and resynthesise the analog data stream