Radio signal goes in, ethernet data stream transmission, based on voltage comes out

Lots of fancy words for a simple wifi-to-ethernet converter that has nothing to do with analog (yeah yeah the signal on the cable is eventually analog on the base layer). Resynthesise, oh my

I think you have not seen all here. @Blackmorec has the most complicated network optimisation I have never read elsewhere.
Here a copy and paste of his network chain:

« My network is based on wireless isolation (I could use optical here and maybe will when I get an FTTP service), using the following:
Tri-band router (TPLink Archer AC5400) with one 5GHz band dedicated solely to audio into a highly modified* TPLInk RE650 set up as a wi-fi to ethernet bridge, with polling and 2.4GHz switched off. I get about 250Mbps, transmission rate, so the GUI runs at speeds similar to a local interface and downloads of albums and metadata take fractions of a second. With music tracks loaded into RAM, there is virtually no network traffic during music replay, and the CPU is barely interrupted from its main task of music processing. With so little activity, heat generation is minimised and power supply loads are benign. I have applied the same design philosophy to rest of my network, which uses Sean Jacob’s DC4 regulated supplies throughout, thereby minimising harmonics where the noise from different power supplies interact. I use a Synergistic Research Atmosphere X Ref Ethernet loom with all shields star wired to a low impedance ground. All DC cables and internal PS cabling is Mundorf silver/gold with JSSG360 shielding on all external cables, providing very low impedance DC supplies to all network modules. All modules and power supplies are mounted on anti-vibration bases or racks.

Every step taken to improve the network resulted in enhanced sonics that I thought well worth the investment. Some, like the Mundorf silver/gold cabling gave improvements that honestly sounded like I’d substantially upgraded my speakers. Adding SJ DC4 regulation gave the music huge amounts of drive and vitality, with SOTA PRAT, that practically bounced me out of my listening chair, something you’d usually only achieve by major upgrading of an amp or adding additional power supplies. Above all, the improvements were all fundamental rather than cosmetic, which made the music far more believable and generated subconscious emotional responses, which ensures increased long term enjoyment and a compelling interest in listening to music«

That doesn’t change that he used 100 flowery words to say “wifi-to-ethernet converter”, and here we have more words for things that are not that special in and of themselves, just piled on top of each other and of questionable use, to put it mildly. My Qobuz data is “resynthesised” a hundred times between the Qobuz CDN and the NDX2. Heck, if I load an Excel file from the NAS it is also “resynthesised” several times. It improves its smell fundamentally.

It’s a forum member having a little fun with the rest of us. 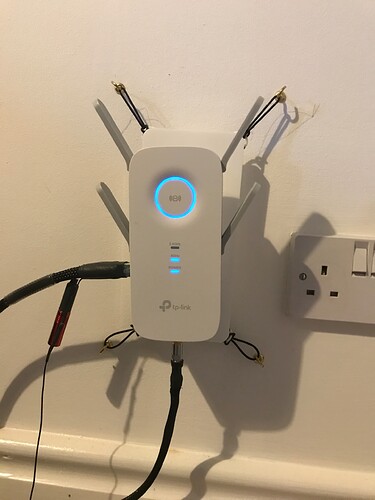 Every time your Qobuz data is resythesized it either sounds better or it sounds worse, depending on how much noise and jitter is included. A network supplies a data stream in whatever condition it arrives, but if you pay attention each time its resynthesised, you impact sound quality. MASSIVELY
If you improve the power supply to your modem for example, the sound quality improves. That means that the improvement at the modem is transmitted right through the network, on the basis of ‘better signal in, better signal out’ . If you therefore arrange your network to be a series of ever improving specifications (less noise, less jitter, less vibration, better screening, more accurate clocking) you basically get compounding improvements….better in, better out, better in, better out and so on, so you essentially multiply the modem improvement at all following stages.
Getting back on topic, improves the wi-fi supply and the network in general, will often resolve dropouts, especially of hi-res stuff and will for sure improve sound quality and all that for not much money compared to a couple of good DR power supplies.

Every time your Qobuz data is resythesized it either sounds better or it sounds worse, depending on how much noise and jitter is included

OK I’m sure you are a comedian

Hi Suedkiez,
It takes about 10 seconds to demonstrate
Take a good recording like Mari Boine’s Leahkastin, where you can hear extremely far into the recording’s depths.
Now switch on all the LEDs on the RE650. Oops….where has all that beautiful depth gone?

I wonder why you are in denial….surely you don’t still believe that old saying “bits are bits” do you ?

I don’t have time for this

looks like a troll discussion… about LED corrupting Ethernet traffic

I am also experiencing issues at times with Qobuz, and by the way, quite knowledgable on the protocols and signaling involved in streaming. There is no way your problem can be linked to noise or any EMI story. You should first diagnose your problem so I advice you to dig in your network robustness, with quite simple topics, such as checking your Access Point statistics and if on cable, check switches statistics. You might have intermittent problems that does not turn into permanent issue… change you cables to Cat6A as well (shielded is much better for longer lengths).

If you have non manageable switches, a basic and easy way to check if you have your connection stalling at times, is to plug a computer on the streamer cable or attach to the same wifi AP and send a continuous ping to your default router, then to any .com site and look at the stability of the answer, which should remain low and never miss a hit.

on my site the issue comes from the fact that I have multiple devices connected to Qobuz and one is failing to login for a reason I do not understand (with the right password), so it is locking up Qobuz access for all my account devices for some time until I switch it off. I diagnosed that with Qobuz support. You should ask them for advices, they can have a look at logs on their side too.

Cheers for the help on here fellas but just to update, qobuz is gone. Subscription cancelled. Drove me crazy. If it won’t work properly on wifi then I’m not interested.

Hi Musiq,
Actually my post was not intended as a wind-up or a troll. I dont get my enjoyment from winding people up but rather from interesting discussions. My background is 45 years with highly complex analytical systems with a major Global technology development and measurement company. I have spent the past 3 years fully developing a network and I am getting exceptional results and its now the only place I put my annual system investment money, until Magico bring out some MkIIIs. What I have found is that the components used to transfer the ethernet signal impose their own performance characteristics on the resulting music and the music sounds like what it was delivered on and used for replay made it sound. A network based on $7 SMPSs sounds nothing like one based on Sean Jacob’s LPMSs and that statement goes across the board with every component.
But this is not the thread for this discussion. I’ll start a new thread and let you know where it is. I’m hoping for some pleasant discussion. So if you believe that buying a superior router and driving it with a good power supply improves final sound quality, come and join a new thread. If you dont believe that you may still be interested in the arguments.
Finally the language on my earlier post was bit flowery, but its just sometimes how I think

That’s all great and all, but it’s always good to deliver advice that people can actually understand and use. Your posts just sounds like another language to me and are completely useless in terms of real help. No offence intended just being honest.

No worry. I actually felt like Mark84 reading your explanation. We are getting slightly away from the Qobuz freezing story, aren’t we? So … there are better places for « the audiophile ethernet network »