Early next year, I’ll be returning to the Sound Organisation in York to have a Naim Prefix phono pre-amp that I recently bought and is currently being serviced, fitted to my LP12.

This means that I will be upgrading my Goldring 1042 cartridge.

I like the idea of the Goldring Ethos cartridge, which is Goldring’s top of the range moving coil cartridge and has been well reviewed by a few hi-fi magazines.

My query is, is anyone familiar with this cartridge. If so, how does it compare with its competitors from Dynavector, Lyra, Audio Technica and Linn?

Love my Kandid especially the 3 point fixing on the Ekos SE…not that I’d try to instal one myself!

The Goldring Ethos is quite a bit lower in price than the Lyra or the Linn which imho are better cartridges but if you introduce value the Goldring is probably the best. I also like the Audio Tech ART-7 but its output is a bit low for the prefix. I have a Lyra Delos on a LP12 with a Prefix fitted so maybe that answers your question in a more definitive way.

Sorry, I can’t give the comparison you ask for.

But in my MM days, I far preferred Goldring’s later 2400 to the 1042 which I found a bit ‘straight vanilla’. So I would expect a more contemporary sound from the Ethos. Only a dem would show you how good a match it is for your Ittok.

Love my Kandid especially the 3 point fixing on the Ekos SE…not that I’d try to instal one myself!

I never knew that Linn offered trade-in value on certain older Linn cartridges until I found an online price list the other day - I have an original Arkiv somewhere, though am currently using an OC-9. 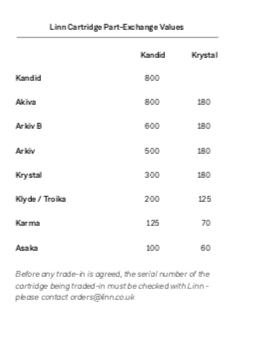 I really like the AT-OC9 on my LP12 - had the original one which was fantastic but snapped the cantilever one Christmas after a few too many festive beers.

I have the Mk II version on the Linn currently and it still sounds very enjoyable though the frequency response was not as flat as the original according to the supplied graph.

I’ve a suspicion the cantilever on the current one isn’t quite straight, it’s also had extensive use so I’m also wondering what to get next. I have another OC9 on another turntable I could swap over as it’s had less use, but I really fancy a nice upgrade instead. Wish I’d bought a Troika years ago - the Arkiv was very good but bass overblown compared to the OC9 which was far more detailed, though the Arkiv certainly boogied.

Not easy to demo a short list of cartridges, especially expensive ones. Idealy you want to hear them in your TT and in your system at home! Strictly speaking, once a cartridge plays a record it becomes second hand. Nearly everybody wants brand new as well.
The vinyl revival has produced a range of top flight cartridges, Lyra Etna, Ortofon MC Anna Diamond, DS Audio etc but at a price. I think its the one product you have to put your trust in a good dealer and one you have dealt with over the years. There should be a trickle down to cheaper cartridges in the range.
I swapped a 10 year old Micro-Benz for a Lyra and found it a revelation. Symmetry, the Lyra importer, supplied my dealer with no problem. Nigel Crump who does demos at the Windsor/Ascot Hi-Fi Shows in conjunction with Mike Valentine is very helpful.
Ultimatly its all down to personal preference as in all things audio.

That’s why I come back. Worth having. I traded my Akiva for a Kandid.

Take the time to have AV options recapp and add the cryogenic zfoil option to the prefix, it is well worth it. I am running a naim’d lp12, with a Linn Krystal and it sounds fantastic, with the matching prefix K for low output. There are many cartridges out there to choose from.

Just for reference, my Uncle purchase a sounds smith Paua, low output MC cartridge at half price of $1950 USD for his LP12, and I was truly impressed with the results, although new, it is $4k USD…UGH!. Although his arm and phono are different than mine, the concept of a moving iron cart, and the ability to rebuild after recommended hours of use is intriguing. They a.so have a Zephyr version at half the price. A sound smith cart may be my next cartridge, but my Krystal is 2 years old, and has less than 100 hours, so it may be a while as I have an NDX and lots of hi-res files too.

I have a a Kiseki Blue NS on a Linn LP 12 Stiletto / Aro / Armeggedon unit sublime, I think Cymbiosis stock the cartridge.

Seems few have heard the Ethos.

Thanks for the advice everyone. At the end of the day, I’ll be going with what my dealer can recommend and demo.

I had recently ( 2 years ago) the kiseki blue ns on the sme 20 / sme V arm. I found it making some treble emphasis or a bit brightness.
Your arm and phono are different. But I would be careful buying it only on other feedbacks, what I have unfortunately done.
The less expensive lyra delos suits much more my system and tastes.
But other enjoy a lot the new kiseki carts…

Would that be the SME arm as I don’t have this problem with the Aro?

Perhaps not a good matching with SME arm…

You don’t mention exactly which prefix you’re having fitted.

It’s a Prefix K, which I believe is is designed for Linn cartridges. I did ask if it could be converted to a type S to give me more flexibility.

K = Moving Coil - 100uV 560 Ohm so that does limit you a bit and the Lyra Delos has quite a high output for low output MC but as you have stated your dealer is better equiped to help you match a cart to that Prefix.

If there’s an SL version of the Delos it might be a better march.