New Mission 770 anyone bought a pair or had a demo

Putting together a list of new speakers to demo just fancy adding the new 770 to the list, it may be nostalgia as I had a pair of 737R’s many moons ago and have very fond memories of them.

Has anybody had a demo, I would be curious on their thoughts, bit late but Happy New Year too everyone.

I used to have a set of 770 freedom speakers, but that was 40 years ago.
Great then. Don’t know about current units compared to new technologies?

Thanks for the reply, similar to my past experience, many years ago, I was hopeful that a few people may have purchased a pair or maybe had a demo using Naim electronics , fingers crossed I might get a few more responses, they seem to have reviewed well but I know that’s not the be all and end all but its a positive start.

Goodness, have Mission come back to life? When did that happen? (I remember that the presiding genius behind the brand used to be a man called Farad Azima.)

I remember being very interested in buying a pair of Mission 770s long ago (although in the end I opted for QUAD ESL63s instead). As I remember, the Missions were one of the first loudspeakers to use a polypropylene driver unit.

Good choice going for the Quads👍

Yes, the QUADs were a good choice, and I had them for about 10 years, before discovering that I could have brand new versions made of their predecessors, the ESL57s. I have three pairs of those in my system now, and they make an impressive racket.

No, not really - stacked pairs in front (two panels each for left and right stereo) and one stereo pair behind (and above) listening position (leather sofa).

A single ESL panel does not create enough volume, but six is another story. 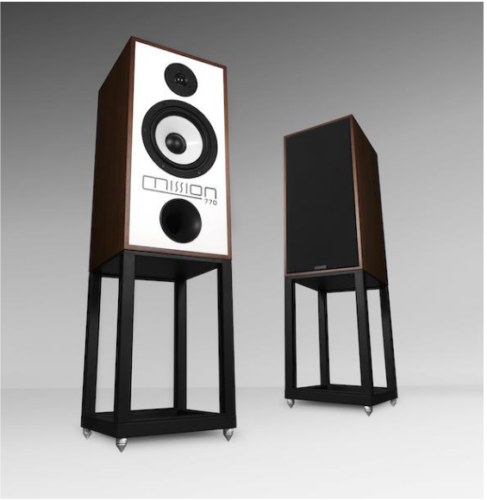 They have had great reviews. I’d give them a go if my other half would allow a speaker change.

Sorry SB I have not heard them but I have heard good things about them.

Interestingly though, I would like to compare these with the Harbeth C7’s XD as they have similar specs although the Harbeth are about a grand cheaper (without stands).

I run the previous non XD C7’s and love their mind range accuracy and ultra clean bass but have wondered how the XD version and the 770’s would stack up.

You know what I am going to say…if you get the opportunity, please do.

I’m not sure what you mean by ‘real stuff’.

I’m of mature years, and used to have the 22/33/44 systems.
Not the new quad stuff , which I believe is made in china ( but may still be good, just don’t know the products)

There are effectively two QUADs these days.

The Acoustical Manufacturing Company, which used to be based in Huntingdon, was sold (I’m not sure of the ins and outs) to a company in China, which makes modern amplifiers and loudspeakers. I wouldn’t touch their products with a bargepole, except to use it to smash them up.

The old jigs (including a device called Mr Jiggy to stretch the plastic used for the panels) and other machinery used to manufacture the classic ESL57 loudspeakers was bought by QUAD’s German importer in Gering by the Black Forest, and is used today to make new, modern versions. (Those ESL57s are what I have at home.) QUAD Musikwiedergabe, as the company is called, also make things such as the QUAD 22 preamp and the classic QUAD II valve amps.

We’ve taken this way off topic, so I’ll stop now (but I just wanted to get the main gist across for anyone who’s interested).

I have a pair of the German QUAD’s too but mine are the 63 equivalent. Very good and great sound and build quality. The pictures on their website don’t do them justice and they look much better in the “flesh”.

The new 770’s are really totally re-engineered for example the x-over has really good quality parts now…the cabinet is stronger the port rear is now flaired…etc etc…the result is a less raw design…with good bass, space and air. I would think you be very happy with it…try it at home as a trial. Peter Comeau from Mission talks about the new Mission 770 - YouTube

Bravo Mission. It’s great to see them back in the fold. Their old 75… series used to sound fantastic on the end of Olive Naim.

At the time Mission pushed the boundaries of design, performance and value…amazing…the latest 770 is an expensive speaker…and very capable