Just a quick one to say that a VTuner Internet Radio feature update is now live that adds a new ‘Public Stations’ view to the radio directory.

For those based in the UK a ‘BBC Radio’ view has been present on the home that exposes the full BBC network including OnDemand and Podcasts.

We have now expanded the system for other countries to show their public broadcaster(s) on the internet radio home screen. Primarily:

Here is an example if you live in France of the home screen: 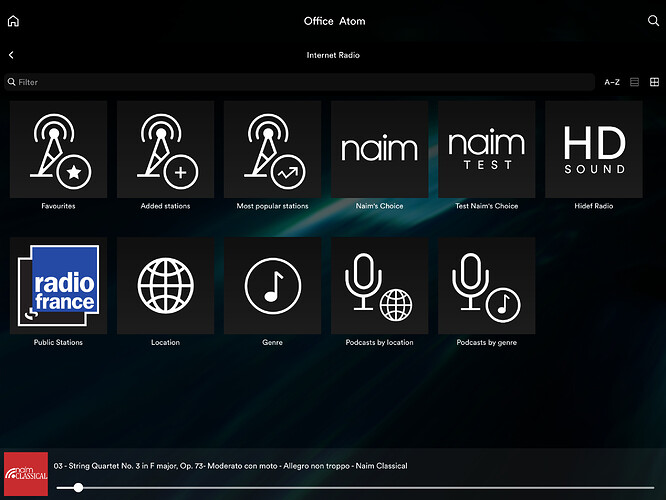 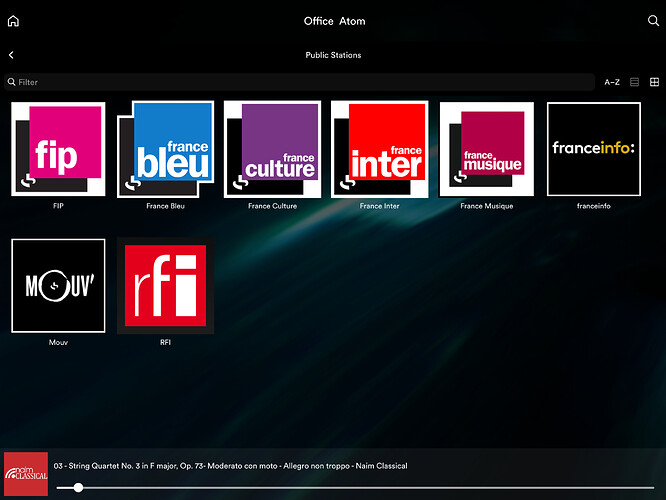 Pick FIP … full network mapped including all the HD variants. 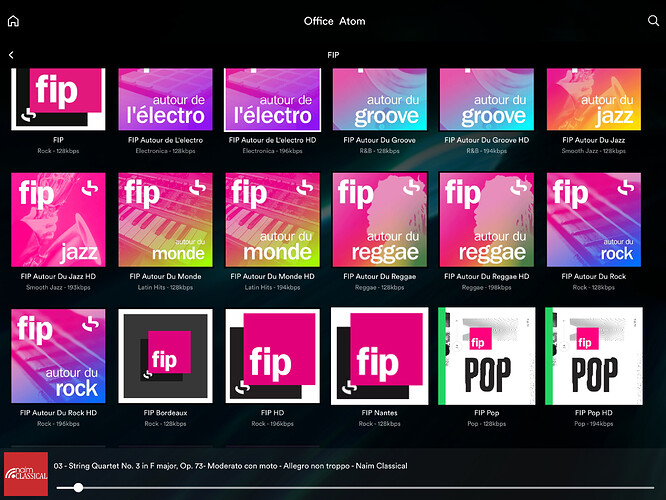 For those outside of a country you can also access these views under:
Location → [ pick region ] → [Pick Country] → All Pubic Stations.

We’ve also exposed the full BBC network as well under Location->Europe->United Kingdom->All Public Stations. Mileage may vary on what will and won’t play based on actual country you’re accessing it from.

The change may take about 24hrs to appear on your streamer. Alternatively switching it off (press and hold the standby button on front panel) / on will encourage it to pick up these changes immediately.

Finally, as a little extra bonus we added Ireland’s RTE 2XM public station into the HD Radio section. It’s RTE’s equiv. of BBC Radio Music 6. They have a nice 320K HLS/AAC 48kHz 24bit stream that sounds pretty nice and a huge step up from the legacy 96kbit MP3 32kHz/16bit one.

Any chance of getting the peeps at vTuner to update the PirateFM ( Redruth, Cornwall, UK) streams, just get a recorded message saying they have changed.
Tunein has done the update.
Have tried emailing Pirate and v Tuner neither have had the decency to even reply.

There is a large update to make ‘Greatest Hits Radio’ to be fully reflected in the database and all the knock on effects of this change. Some areas of the country are now sorted but there are some areas that are still out of date.

If all goes well it should be all in sync within a week. Once done I’ll post here as some stations are now dead and will need a retune.

That’s a tremendous update to include BBC podcasts. Thank you.

My wife will be pleased - she can play the OnDemand versions of her Radio 1 favs. (Not such good news for me though!)

Thanks for reply, had an email from vTuner support today who are looking into it so hopefully things back to normal soon.

We were working with the dev team today on this matter. On our test servers it had the full network mapped, so hopefully we can get that rolled out asap. It will require a retune to the new station name - I think I’ll post a new thread on the subject so those doing a google search can find it.

Just tried the BBC On Demand streams (from the UK) which appear to be 125k streams - can we get the 320k HLS streams that (for instance) can be played on LMS?

BBC live broadcasts in the uk are exposed in 320k hls/aac. They’re accessible for any platform as long as that platform plays by a few basic rules that the Beeb lay down. This update ensures we have everything to latest standards as the BBC have had a good spring clean of legacy url’s and systems.

Ondemand content is more restricted and Naim are very fortunate to have access to it. The BBC provide the streams and they are typically 128kbit aac. There are no options for us to select higher bit rates.

Thanks for clarifying Steve, much appreciated.

BBC have had a good spring clean of legacy url’s and systems.

Probably the reason all the BBC stations (except BBC R3 HD) on my Serviio Online Sources packed up earlier this week. Been there a while and I did not know they were legacy. Now fixed thanks to info from some nice man in Netherlands.

Naim seems to have done a superb job with Internet Radio.

Don’t know if the Bauer changes made for Greatest Hits Radio will bring it back, but Lincs FM is now a message about the stream being dead. GHR Lincs isn’t the same station - are you able to get a working stream for Lincs FM added back ? I can only get it via the Lincs FM app now, which isn’t much use on the Nova. ta.

I’ll ask VTuner to update their database though as the URL is out of date. Hopefully should be sorted by early next week.

Steve, Thanks for doing this.

( I know Lincs FM isn’t part of the Greatest Hits Network, but as they sold themselves to Bauer I wondered if the streams (s) changed when GHR (Lincs), which is also Bauer, became a thing.

On my qb first generation I can see the public category in Denmark, however only the 7 live channels not all the podcasts/ondemand that the main public broadcaster Danmarks Radio www.dr.dk has available. There is actually another public funded national live channel radio 4 RADIO4 – Taler med Danmark it is available in the country listing for Denmark, but if the idea of the public channel is to list all national public stations it should be added also.
Claus

For now the view just gives the primary public stations for various countries and not all the extra services like ondemand etc.

Thanks for the tip on the radio4, Denmark, that one was hiding from us. We’ll get it added + it currently doesn’t have a station logo so needs a bit of extra love applied.

Thanks, I appreciate the effort.

No problems. And for those else where in the country who had a similar issue, your local Bauer station should now be working. for example SAM FM Bristol which went rogue. It was a complex update and needed a bit of local knowledge to get it right.

Steve, Do you have the stream URL - I have emailed RTE twice but failed to reply.