I’ve never been to a hifi show. I can’t think why because from the photos they look like really exciting events with a great mix of people. 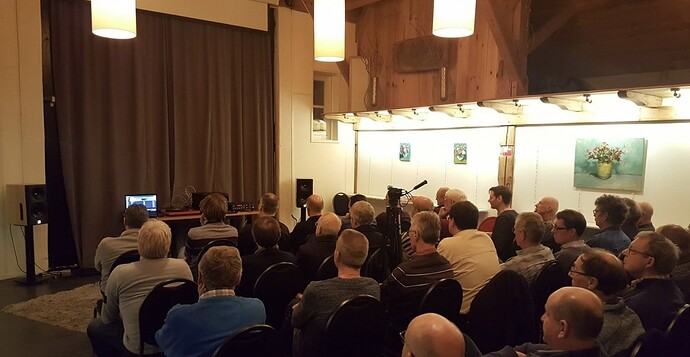 What an inclusive crowd. If you are either male, over 50, (going) bald, grey or wear glasses (preferably all the above), you are going to fit right in. Luckily I tick all those boxes.

BTW, the wearing of anti-glare glasses is recommended for those sitting towards the back because of the degree of light reflected off all those bald heads.

That Fez comes in handy😉

This one looks like it must have been particularly exciting. The guy in the red t shirt is a highlight. Maybe he’s listening really hard to Diana Krall picking her teeth, or feigning indifference so he can suddenly leap forward and play his favourite Mantovani record before anyone can stop him. 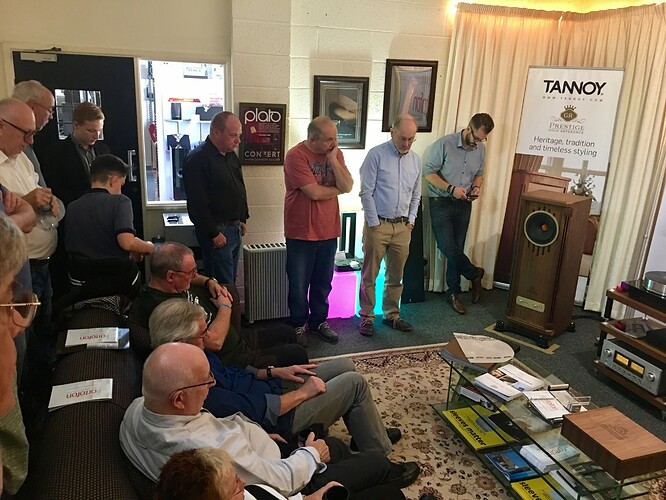 That’s a good point. It’s all about getting bums-on-seats, even if they’ve been lullabyed to sleep by the plinky plonky music.

That reminds me of some other criteria in order to be welcomed at such events.

A liking for the Krall and the Cassidy, the ability to remain awake/look interested and some middle-aged-spread forming nicely. Again, I tick all the boxes.

The Fez is always removed when entering such a room. I have manners you know.

… and the sales rep catching up on his twitter feed…

Yes, if you are going to have literally hundreds of people coming through your room it makes complete sense to play music that both sounds good on your equipment and won’t frighten people away. Hifi shows are there to sell hifi, not to introduce people to new music. 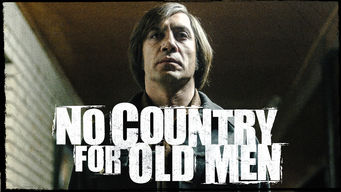 I posted this as a mickey-take a while back as the kind of thing you hear at hi-fi shows. It’s completely fabricated using one of my own pics.

I agree but I sometimes feel the music at shows and demos is aimed at the type of punter I have described, resulting a self-fulfilling prophesy.

As Naim, and other manufacturers, introduce more products aimed at a younger customer or those more interested in convenience (new Uniti range) and physical form, but differentiated by superior SQ, then a broader range of music will be needed to attract and retain a broader range of customer in the demo room in question. This could also be true when attempting to market Classic products to newer (younger) entrants who may have decided they now want more than an Atom, for example.

I am guilty of not entering/leaving a room because of the dreadful music being sampled. I also feel that a greater variety of music could be played if the demonstrators didn’t insist on playing every track in its entirety.

Judging by the posture of the bloke in the front row wearing the light blue shirt and glasses , the music is just about going to send him to sleep

Perhaps they would be better off listening to a series shrill test tones. rather than some obnoxiously unassuming plinky plonky lift music… perhaps there may be more attentiveness that way…

Or here is a thought…

Have a real musician… record them playing whatever instrument or even singing and what ever music genre in front of the audience , … it almost certainly won’t be that important… and then play back and compare… a) that would be interesting, b) possibly also quite informative on performance… the recorder could have say three different profiles of compression of reverb to give insight to mastering techniques… in these days of affordable high performance DAWs this feels quite achievable.

You are right why just jazz some people hate jazz. They should put on a Bruckner symphony.
Which is loud. Or classic rock Eagles etc.

At a show a couple of years ago Vertere had the singer Elles Springs and her guitarist Mark playing live (acoustic and Dobro), then Touraj put on her album (on the Vertere label). System was Vertere RG-1/Reference arm/? Cartridge, FM Acoustics amps, PMC MB2SE.
Yes the live music was clearly more involving, but full marks to Touraj for showing his system in that context. (The system was superb.)

Try Mahler’s Second or “Pictures at an Exhibition.” I prefer the Decca sound, but there are other good choices (rarely DG though).

Bring a disc with well recorded violin too.

My demo list used to be U2/Madonna/Def Lepard/Handel’s Messiah or a Brahm’s violin concerto.

I used to too. But on recent shows, when I’ve asked if I can play a CD, the guys generally look aghast and have faces that says “What ? A CD ? What’s a CD ?”

I’ve come to the conclusion that it’s a waste of time now taking any of my CD’s to a show. The electronics there don’t have a slot to fit them in…

And yes, twiddly jazz rules there.

I (try to) use Dohnanyi’s New World Symphony on Decca. Stunning performance and sound. 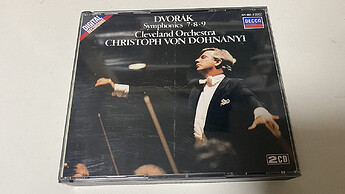