Thanks for the interesting show reports. Sounds like a good show. Did anyone hear the Innuos / Accuphase / Kudos room ? 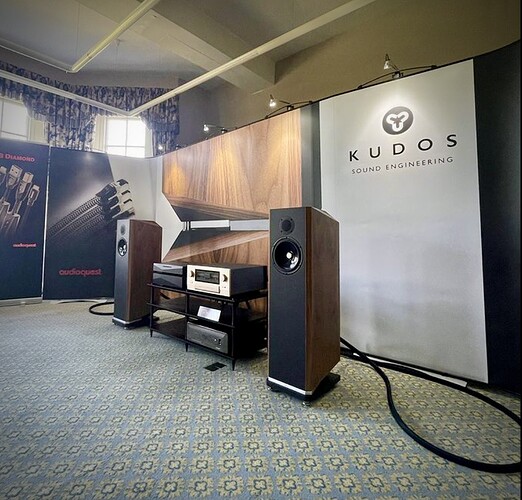 Yes! I went in there to see if it sounded any better than mine.
They used the 707s from an Innuos Statement into the new Accuphase E5000 integrated, and AQ Niagra mains conditioner. They had Dire Straits live playing.

The 707s sounded great as you would expect - very natural and open. But overall the music itself sounded a bit compressed and the bass was slightly flabby.
I suspected it was the mains conditioning robbing it of dynamics, but could also have been the room acoustics?
The rep said that in their (more controlled and better environment) demos the Accuphase was a lovely organic match with Kudos.

Super - thanks for that. It looked an interesting, yet simple combo, so I appreciate the feedback on what you heard 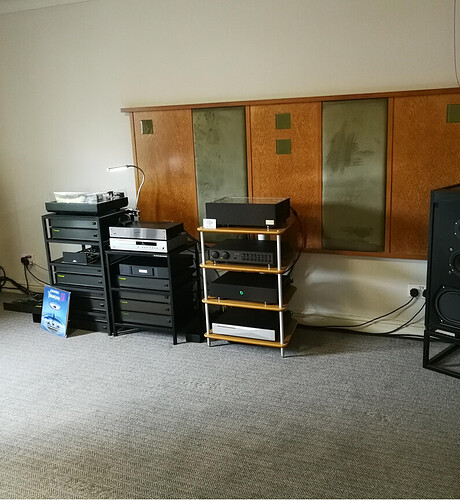 That looks a fun system Jim. Some ‘interesting’ kit in the mix too

Well I went with an open mind, expecting nothing to sound ‘fantastic’ dud to room acoustics etc but was pleasantly surprised.
My favourite room was the Auralic Altair G2.1 streamer - ATC SCM40A room. I thought that sounded really good and although it was played via a pre loaded usb (they couldn’t get a reliable connection for streaming seemingly). Just incredibly natural and balanced. My wife was quite surprised that it sounded so good from a ‘one box’ system.

The other room I enjoyed was the Audiocounsel room. Audionote cd, Leben integrated into Devore loudspeakers (sorry forgot models, should have taken a note!).

As usual came away with a few LP’s from Diverse.

Many thanks for all the replies and reports that are far better than mine!

My take on yesterday’s visit. According to the exhibitors, Saturday was the much busier of the two days. We had easy access to most rooms on the Sunday without it ever feeling too busy. Impressions of each room that caught my attention, and more impotently, have photos of…

Acoustica: Finally got to see and hear a Naim Solstice! I thought it looks so much better than photos suggest, and I really like the new electronic casework.

The big Naim system was playing into B&W speakers, and I’m sad to say I thought it sounded ‘compromised’ and certainly not representative of what an S1/500 system is capable of. With regard to the Solstice, the dealer outlined he thought a customer had ‘tampered’ with it as it sounded really ‘off’. I agree, it lacked any bass or mid range weight, and from what I’ve read of its capabilities, obviously there was a significant problem - disappointing as I really wanted to hear a Solstice in full voice! 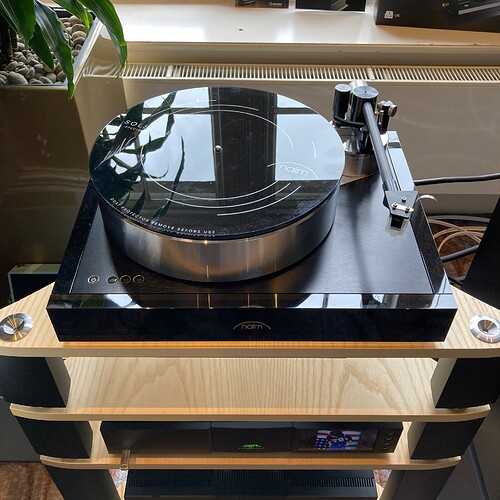 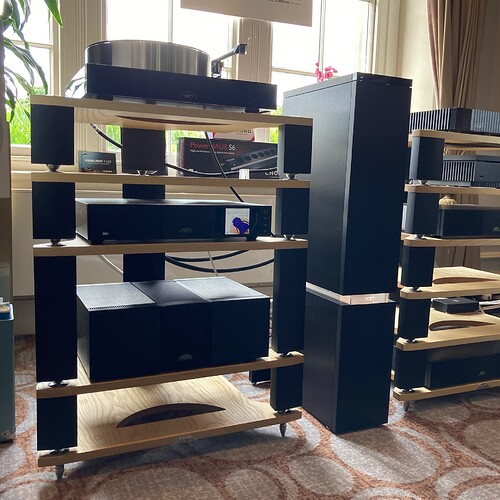 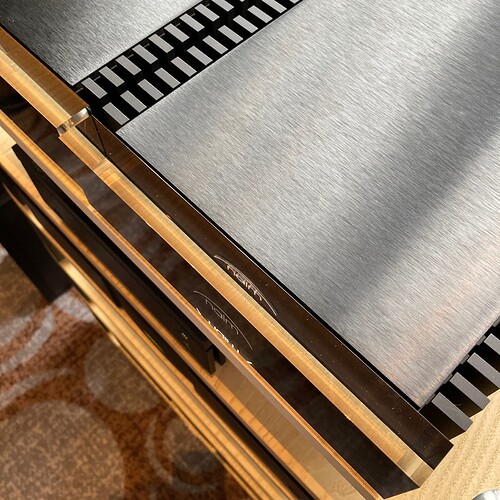 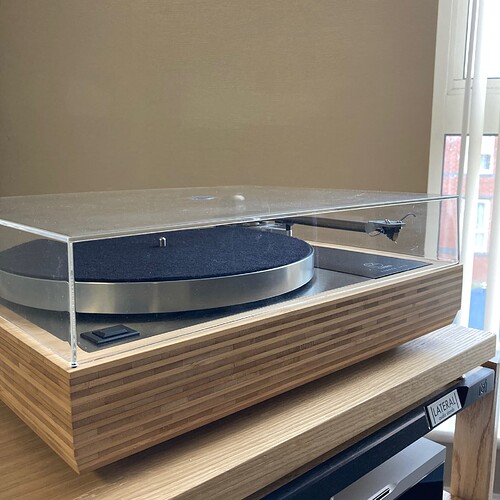 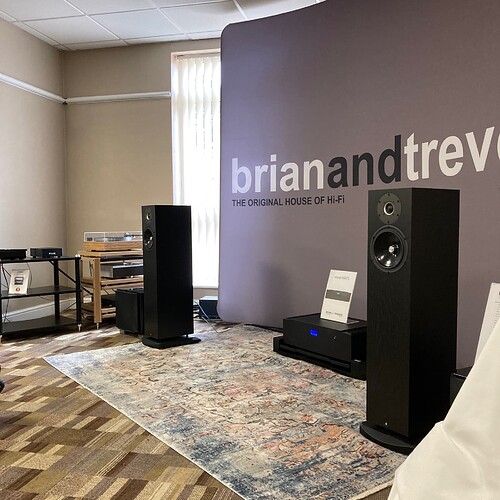 Audio Counsel: Liked this room. The sound of Audio Note playing into the DeVore speakers was lush, involving and engaging, if a little boomy in the bass (rear ports close to wall). 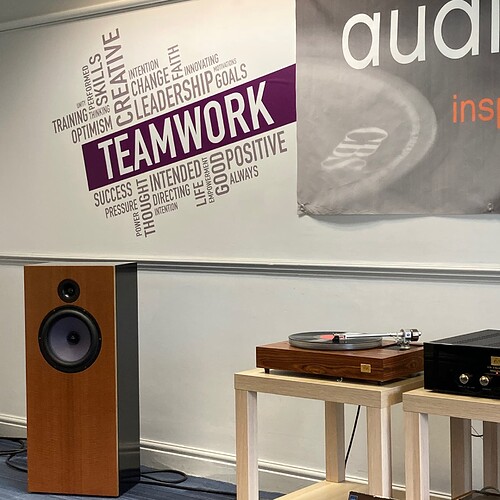 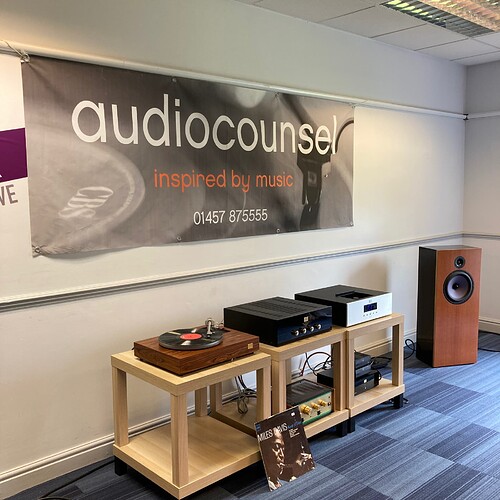 Accuphase and Fink: Very good indeed. A special paring if ever there was one - really liked this room a lot. A detailed, punchy engaging sound, but one which could easily be listened to all day long, a difficult balance to achieve. A perfect example of system synergy in this room. 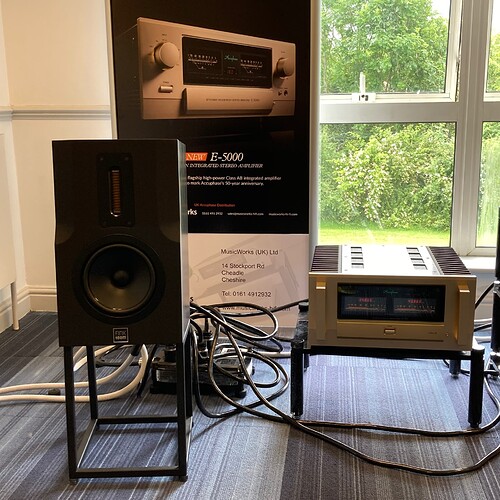 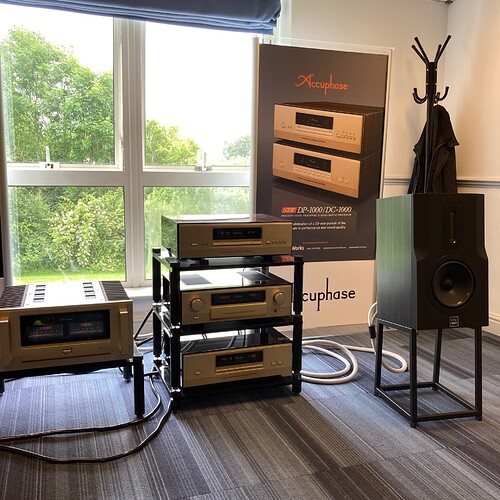 Chord: First time ever hearing an M-Scaler, alongside their new Ultima Preamp with Neat Orchestra. Very good, if perhaps a little too analytical for me. Impressive scale and dynamics to the sound, and holographic soundstage too. Nice system. Surprised that the Okestras worked so well in a small room. 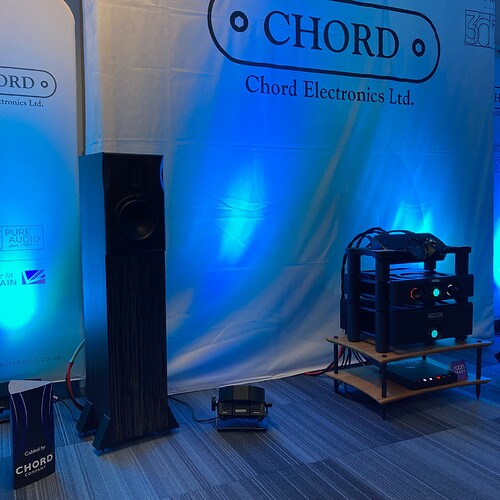 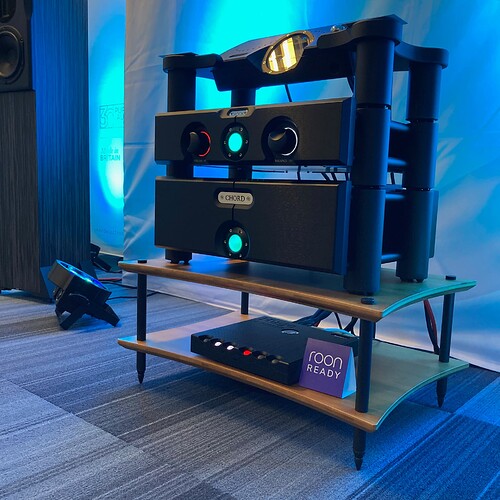 Vertere: Met Touraj who was really welcoming, and as it was very quiet when we were there (later afternoon by the time we got to this room) he was willing to switch between decks to compare up, from the intro DG-1 to the MG-1 and SG-1. Lovely! as was the FM Acoustics preamp into the active ATC SCM40. VERY impressed with the sound of the Vertere decks and this room in general. Touraj was great company too. 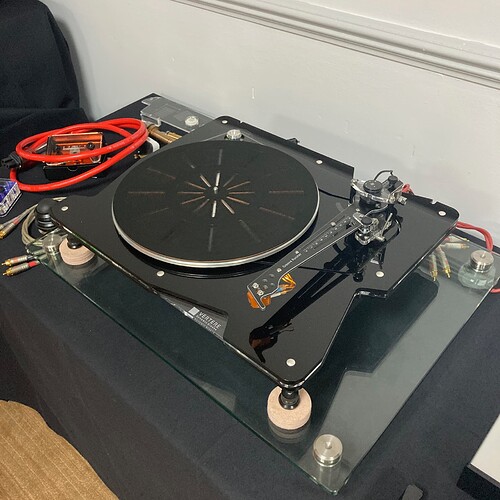 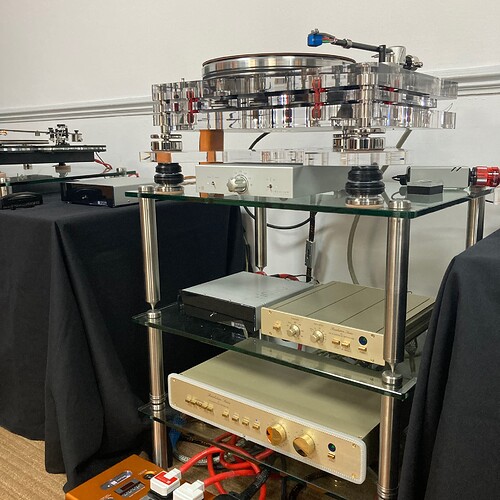 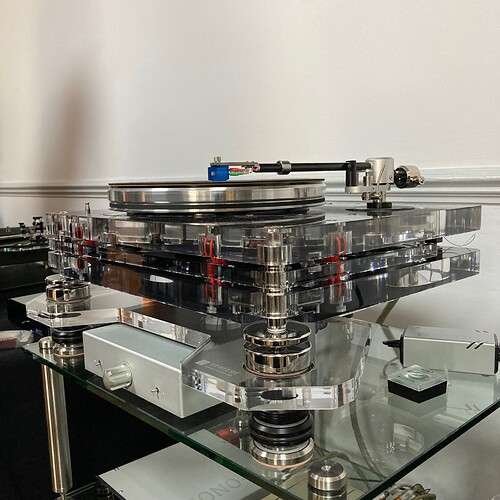 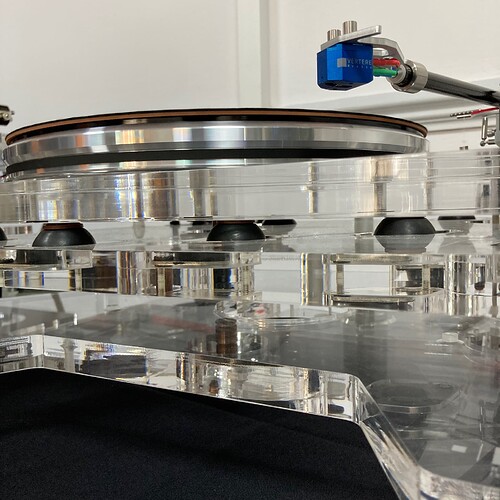 Kudos: Using an Accuphase integrated and sounding rather good, if lacking a little in overall impact / scale (room?), but this system did have a ‘listen all day’ inviting sound quality which appealed the more I listened as they played Laughing Leonard Cohen. 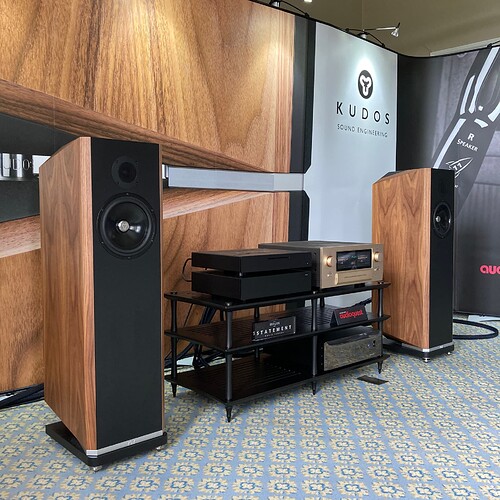 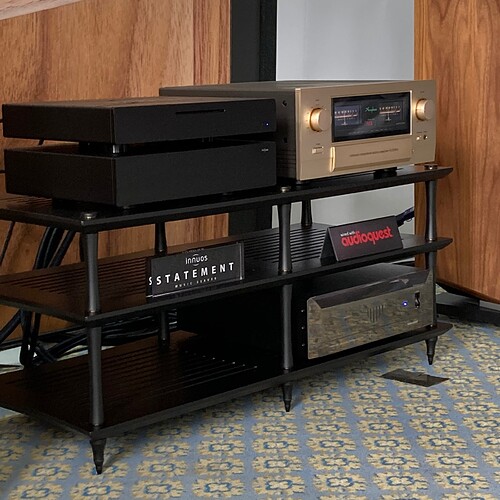 ATC & Auralic: Now, I quite liked this room, but after initially enjoying the impressive scale and dynamics of the very direct sound presentation, I soon found the sound rather unforgiving and relentless. 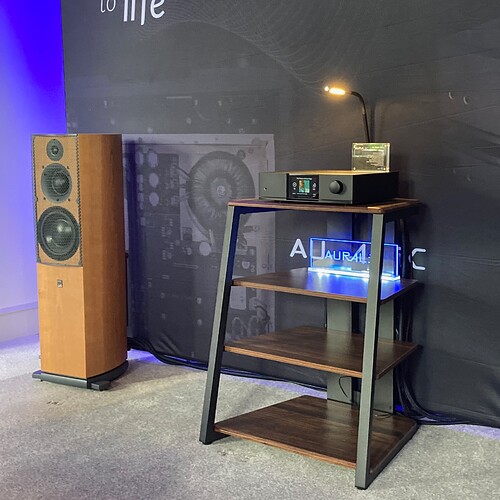 NewBriks: Mmmm. Now, this was interesting. Very impressive sound initially - dynamic, fast, incisive with truly amazing bass impact and control. Especially so after hearing so many ‘one note’ bass systems prior. But, I soon found found it fatiguing and too forward after a little while. Plus, the level of complexity due to the sheer number of boxes required to build this mega active system just seemed overkill to me, and took up a crazy amount of space, not to mention the hassle of modifying all of the Naim amps internally. I won’t deny though, one of this most impressive rooms at the show. 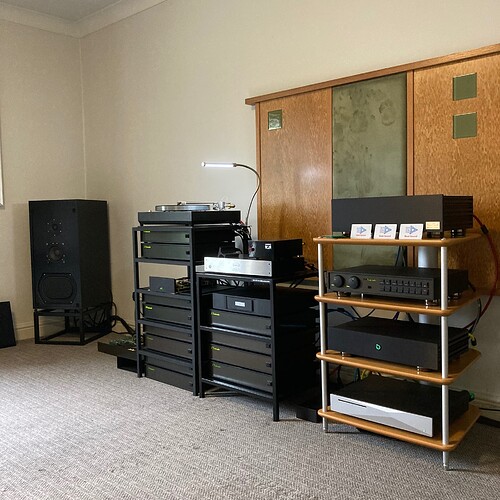 KEF: A very ‘corporate’ presentation, but there is no denying that the sound for an AIO speaker, amp and DSP streaming speaker set up, was very impressive indeed. The chap was very accommodating after everyone left and was more than willing to swap in the Blades and the Solution pre / power to compare. They were much better than the new Anniversaries! 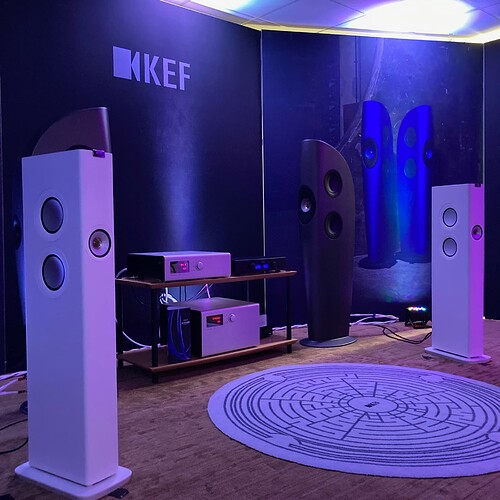 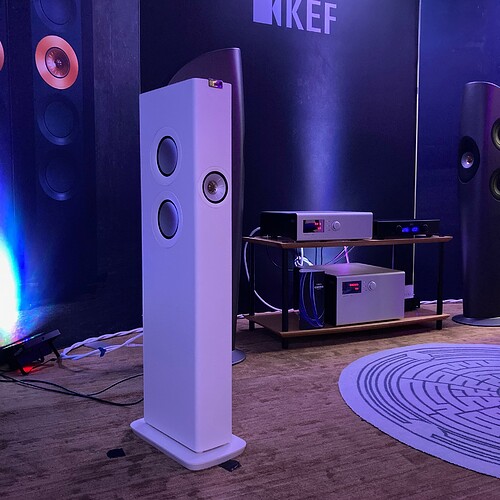 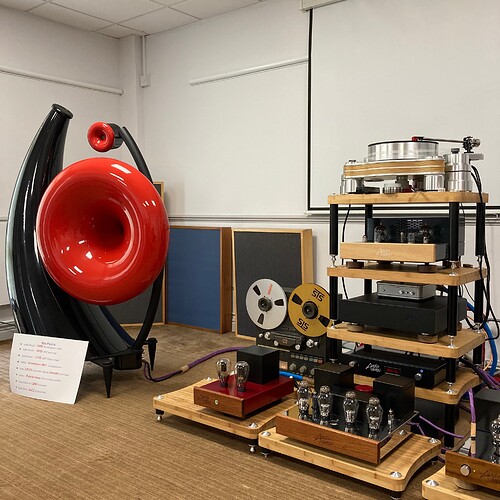 Neat Acoustics: More often than not, Neat have been my favourite sounding rooms of the show. Not this year. Something didn’t quite gel for me with this system. It could be the room or perhaps the amp / speaker synergy, I don’t know. But, in their favour, the new Petites did their usual Neat ‘voodoo’ trick of a creating a huge sound from tiny boxes.

Definitive Audio: A system Kevin Scott set up around the Kuzma R turntable, SJS amplifiers and of course his own Living Voice speakers. This system should never have worked in such a tight space, but oh my, it did, beautifully. A sound presentation that was cohesive, involving, dynamic and quite simply, intoxicating. Amongst several tracks (we stayed there quite a while) Kevin played Vivaldi, Arias by Cecilia Bartoli, not an album I’m familiar with, but it was hypnotic. My old school buddy who accompanied me for the day whispered to me “I don’t know whether to applaud or cry”. I think his reaction sums up the sound quality better than I can here. The holistic approach Kevin takes to system building really evident here, where the whole can add up to more than sum of the parts. Also, one of those rare vinyl systems that seemed to minimise surface noise to such a degree, it almost sounded like listening to a reel to reel tape. Very very impressive. This room left a lasting impression and If I had to pick just one system, this is where my money would go (not that I could afford it!).

A very interesting day out. Great venue, well organised and positive vibe to the whole event. 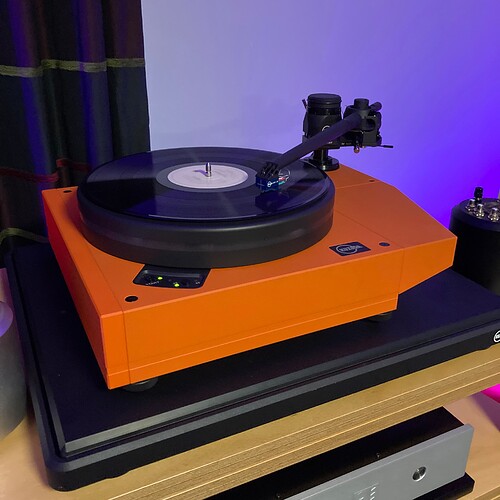 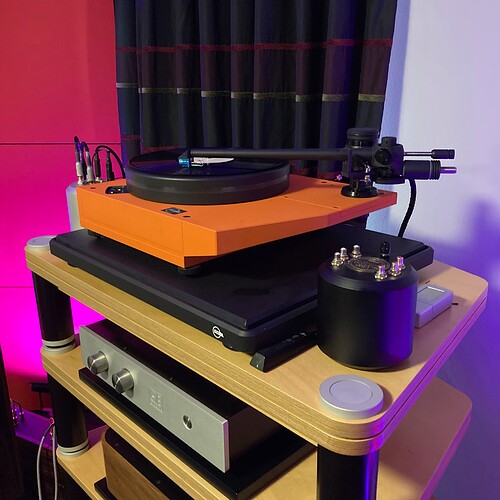 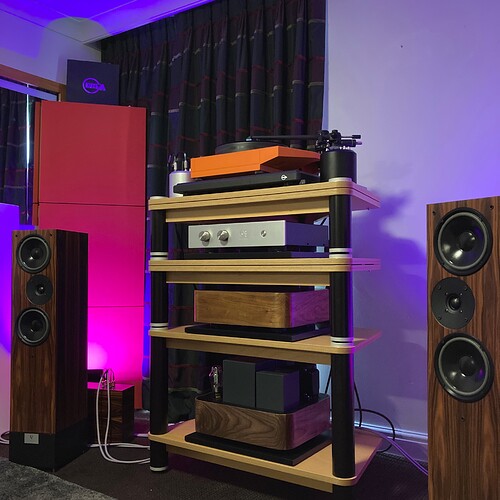 Did anyone visit Moor Amps? I’ve had a couple of interesting conversations about them recently.

I understood that they were also there themselves, partnered with Graham Audio speakers, hence the interest.

Really? Damn, if they were there I missed them. Frustrating as I would have liked to hear the amps in the context of another system, as they sounded great at the heart Brian & Trevor’s set up.

Interesting - the Angel 6 seems very well regarded. Thanks for the show impressions and pics

Thx for your show feedback👍

@Gazza and @james_n Both welcome

Yes, if the performance of the set up I heard is representative then I can see why they are receiving plaudits. The Moor amp had a tight grip over the Kudos speakers in Brian & Trevors set up - if it was the 6 that is. Not sure it it was the 4 or the 6 on demo - it was certainly a big burly beast of an amp in its oversize casework. I like the retro style (Naim influenced?) casework of the preamp too. 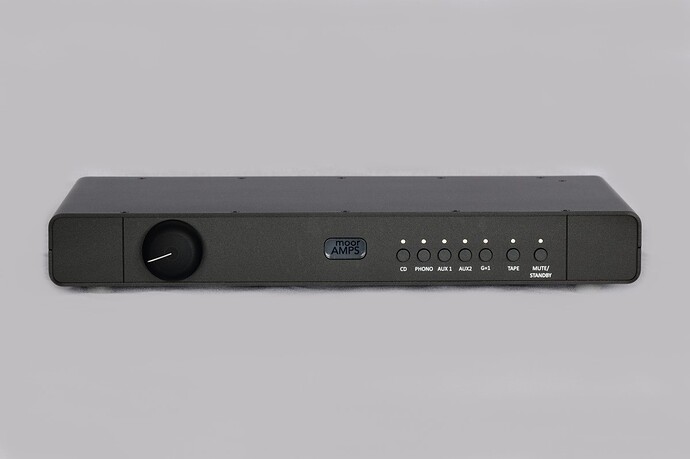 You must have been lucky with timings! I really wanted to hear them to see if they lived up to the reviews so called back twice. Each time the rep persisted with the corporate sales pitch for the LS60s, very annoying. They looked striking anyway.
What did you think of them? And were the Soulution amps worthy of their status?

Did you hear the Nagra / Plinius / YG system? Later on they swopped the streamer for an SME TT, playing classical & opera. Seriously good. If I had the money, with a CD source this would be on my dream-system wish list.

Generally I don’t comment the look of the gear, but here, I have to say it’s specially cheap looking. Awful. But of course if the sound quality is there, I can forget easily the look.

We sat through the presentation and once the room cleared we were the only two left in the room, the KEF reps were more than willing to chat and swap things around to the (new, revised) Blades and Solution / Hegel (DAC) system. Very very good indeed, although I did fee that it was a little ‘Hi-Fi’ and the bass although forceful and propulsive, was a little one note - could have been the room dynamics as it was a big space. The fit, finish and build quality of the Solution amps was something special.

I missed listening to the Nagra system in detail unfortunately, as when there the music was on very low and there were a lot people talking loudly, so we made a swift exit, and never got around to revisiting.

I never made any claims for it being pretty! Functional and well made, certainly. It didn’t appear or feel cheap in operation that’s for sure. I am fan of pragmatic utilitarian design where function leads - a good example here I thought, even if it won’t win any beauty contests.

There’s a memory- enjoyed many drinks in the Last Drop village - not all when I was over 18!