Breaking in my new Nova, loving it so far.

However, I noticed something earlier, which has caused a little concern.

When I put on an album, the artwork was intact, but had multiple flashing black lines through it, vertically. Almost like a bad TV reception.

The album was ‘662’, by Christone ‘Kingfish’ Ingram (checking it out as a Mojo recommendation). Didn’t get very far as the flashing was very distracting!

It hasn’t happened on any other album in the last few days since purchase, just this one so far.

I’m a bit worried as my previous Atom, it took until my third to get a good one. The second suffered red lines, diagonally, across the screen. Posted here about and returned it, replacement was fine.

Any thoughts/advice? It would happen today when everything closes for Christmas!

Happened in the first week of mine and my dealer swooped it for a new one, no problem since

Super - thanks for the reply.

Did yours just do it on one cover? Or a regular thing? Mine’s only done it on the one so far…I was just worried in case it was the start of something, after my Atom.

Or maybe it was simply a one-off…?

Once it happened it did not return to normal on mine.

Power off at the mains socket, then remove power lead from Nova. Leave it unpowered for an extended period, even overnight, then reconnect power lead (make sure it’s tight) and turn on at mains socket.

That might cure it, if not talk to dealer.

My Atom had a persistent graphical glitch and got returned. My Nova has occasionally had graphical glitches cured by unpowering for around 45 minutes, not seen this since.

It hasn’t done it since…I returned to the offending album cover earlier, and it loaded perfectly well. Hoping it was just an early ownership glitch as it settles in.

Would the consensus then be to unplug overnight, to eliminate that factor? Or just leave as it, as see if it continues to behave?

Maybe record the event with the dealer, but if it’s ok now see how it goes.

I had display corruption on an early Atom, could not get rid of it and assumed hardware fault, it was returned by which time Novas weer available and I got one.

The power inlet socket on the Unitis is quite tight - when I added a Powerline to my Nova (big enhancement) I think I didn’t push it home correctly and am now convinced that that caused a momentary disconnection somehow affecting display circuitry though I had horizontal garphics issues not vertical.

I disonnected as I described (off at mains socket if there’s a switch, turning this back on last once a secure IEC power in connection is ensured). Brief restart made no difference but a long one did.

If it comes back, costs nothing to try it, may fix it, if not talk to dealer and get it replaced or repaired depending on age.

My Atom had a complete meltdown a couple of months after I bought it. There werr some rather alarming noises from the speakers and the screen broke down. I thought I would have to return it but after a restart it behaved normally. 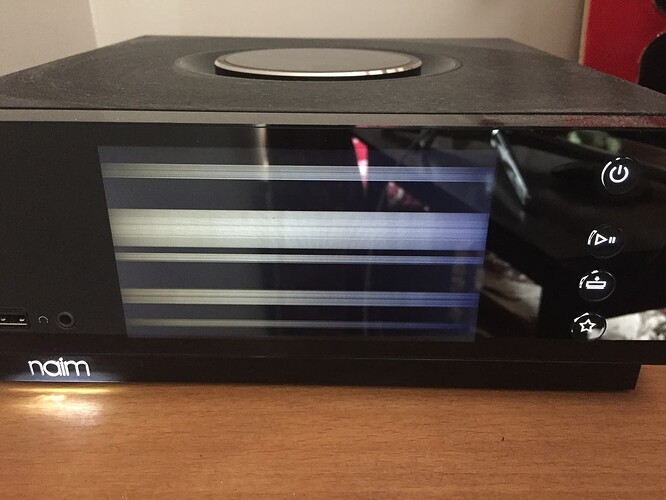 My Atom had a complete meltdown a couple of months after I bought it. There werr some rather alarming noises from the speakers and the screen broke down. I thought I would have to return it but after a restart it behaved normally.

That’s exactly what happened on my Atom but no end of things fixed it, replicated after a long power off at the dealer’s store. It was RMA’d.

My Nova had similar lines one or twice fixed by extended power off and restart - album art or onscreen graphics would show but became corrupted, sometimes with dynamic changes to the display rather than static - all very odd, not seen it in ages now. Might even be something that’s been addressed in firmware (I think screen display buffer refreshes have been reduced recently unless the display has actually changed).

It went away for a few days - but it’s back.

Different album, of which I started yesterday, and was continuing this evening. Soon as it came on, it was going bananas.

I can’t follow that link as I’m asked ot sign-in for microsoftservices or something. 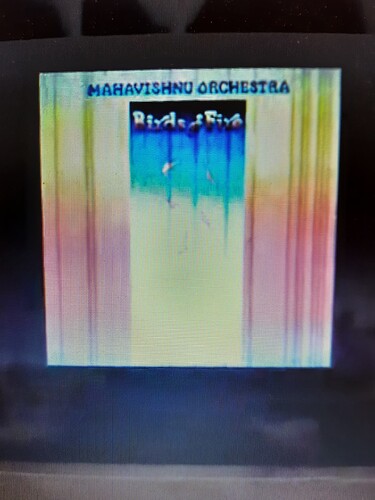 All the lines move around like TV interference. Have tried the reset stuff the other day when it first occurred - fine for a few days, then back with a vengence!

Suspect there are different causes for display glitches.

Talk to your dealer, you may need to have it replaced via RMA.

Most of the glitches I’ve seen have been horizontal rather than vertical similar to ChrisSU’s post above or that sort of effect corrupting artwork.

I have had corruption that changes with time too which has not reappeared in absolutely ages - an image would display and gradually get corrupted in an odd manner - I’ve assumed disconnecting for an extended period resets some display circuitry issues, but why they happen in the first place is a mystery.

If it keeps happening it’s not right and should be exchanged.

My Atom went back. My Nova has not had an issue for ages.

Could someone be powering the Nova on/off less than gracefully? IS the IEC plug firmly seated in the Nova’s power in, it can be deceptive?

I’ll take your advice and chat to the dealer tomorrow. Thought it was fixed, as it had been alright for the last few days. Changed record earlier, and it’s fine once more.

Annoying really, as I wish it would just stay like it, as intermittent problems are the worst. I have managed to get the photo, and a 10 second video which I can forward to them as proof.

I’m sure that here in the UK, I can demand a replacement, within 30 days? Sure it’ll be fine, but I don’t want a repaired one after 7 days!

I guess I am extra concerned, as I mentioned previously, it took me 3 Atoms to get a right one, one of those was a big screen glitch.

Last time I had a graphical glitch I actually thought it looked quite funky but had it remained I would have had concerns that a defective component somewhere in the display circuitry might be having an adverse effect on sound quality.

Sounds a though you’ve been unlucky with the Atoms and again with this. It would be interesting to know if certain patterns of glitches can be ascribed specifically to known hardware faults or possibly in some cases due to software glitches (maybe due to source images?) altering the display buffer content inadvertently. In honesty I think it’s most likely hardware related but why some of us have had glitches that then completely disappear is baffling, almost as though something has got itself into an unstable state that is later reset and behaves normally.

Maybe @Stevesky would have some ideas if certain artwork encoding oddities could throw the software rendering the cover art image and displaying it?

I’ll report back as soon as I speak with the dealer tomorrow. I always hate having to make calls like this!

Will keep you all informed…

If you can take it in yourself - as far less easier to be fobbed off!

Trouble is I’m back to work tomorrow, and it’s their first day open!

Glad I filmed it, given the intermittent nature of the issue.

You could even email them today with your images so it’s documented rather than just a conversation tomorrow. Dealers/Naim will I’m sure sort it ought if persistent. If it disappears by the time it’s got to the shop you then have to decide to push for replacement or see how it goes, if it’s persistent it makes it an easier choice.

Work and family matters often get in the way of being able to get to a shop directly even if it’s fairly close.

Spoke to the dealer this morning.

They were helpful. They’re not sure when they’ll get another Nova, so they did initially suggest sending it back for repair. I politely told them what a non-starter that was, given the unit is only a week old.

Insisted that a replacement is what is needed.

With Naim apparently closed until after New Year’s Day, I’ve been promised an update next week as soon as they speak to them. I’ll be calling them next Wednesday if not.

The video I took was emailed to the dealer, and I have their reply as proof of it not being normal. They are also going to forward the footage to Naim.

I did ask them to also make the point that I have now been in receipt of 3 faulty units (two Atoms, one Nova) in the last year. Not a good run…maybe they’ll feel festive, and throw me in complimentary Powerline…hey, we can dream, can’t we!!!