There seems to be a strong development of the open baffle speaker market in the U.S.

I have come across three (linked) individuals who are involved in this:

I would love to hear some open baffle speakers.

But I have not found any for sale in the UK.

Are there any users of them on the forum?

Why do UK firms not make them? (Or do they?)

What is an ‘open baffle’ loudspeaker? Put briefly, what does it have, or not have, that other loudspeakers have/not have?

Do my Quad ESL57s qualify?

What is an ‘open baffle’ loudspeaker?

Here a picture of an open baffle speaker: 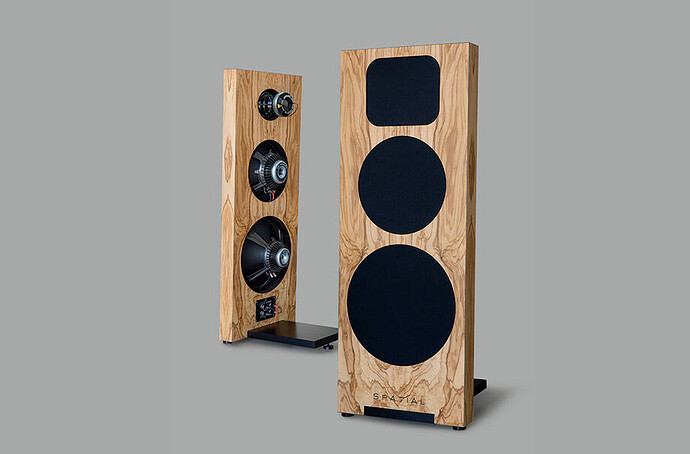 It is a Spatial (Europe) speaker. (Picture is from lowbeats

Would be great to read some impressions of this concept here …

I’m not sure whether electrostats qualify?

Do they have a baffle as such, i.e. a flat surface on which drivers are mounted?

If not, then they are not open baffle.

I think the advantage of open baffle is that you hear the drivers, and you avoid all the problems of the boxes trapping in soundwaves and resonating and vibrating.

Most designs tend to give a cardioid dispersion pattern, i.e. in front of and behind the speaker, but not much at the sides because of destructive interference as the soundwaves meet at the sides.

Hi J, I believe they need to be well of the wall behind them. I’d love to hear a pair too just out of curiosity

Jim - Worth searching @JohnWillmott posts as he runs a pair of open baffle speakers.

What speakers do you use with your NAP 300? Hi-Fi Corner

:SJB You’re going to have to put another row in your spreadsheet. I am the lucky owner of a pair of PureAudioProject Trio 15 Classics … these are open baffle speakers, each speaker has 2 X 15" woofers and a full range Voxativ ac 1.6PiFe driver … The speakers are rated at 8ohm and 94db sensitivity … easy to drive, very fast with great bass response. Superb mid range … Speakers are a tad large at 24inch wide … 50in tall … and a maximum depth of 16in. My room is a 22ft square with a 6 sq ft no…

Yes, open baffle speakers tend to need to be anything from 3 to 8 feet out into the room, from what I have gleaned.

Here is a video with good quality binaural recording of Spatial speakers with a 10watt amp (one needs to listen via headphones).

The electronics are from Innuous, Holo and GR Research.

Ah, yes, Pure Audio - they are one of the other major makes of open baffle speakers.

Steve Guttenberg reviewed them a while ago.

But, again, they cannot be demoed in the UK AFAIK.

OMG, that guitar on this CS track is JUST delicious

Like it too. Find it: Chris Stapleton, Death row. And just bought the album on Qobuz.

Open baffles are not revolutionary - they were the very first loudspeaker designs!

Cone drivers (other than those with their own totally enclosed rear chambers as with some midrange units and most tweeters) radiate approximately equally from the back as the front. With bare driver suspended in the air, some of the the air pushed forward by the cone simply rolls around the edge of the driver to the replace the air ‘sucked’ forward by the cone (and vice versa when the cone reverses), limiting the amount of air moving in the listener direction. This effect is more pronounced as frequency lowers, and seriously limits low frequency output. otger than a function holding the drivers in place.The first baffles in loudspeaker design were the first separate loudspeaker “enclosures” and were simply sheets of wood (i.e. no cabinet), as large as practicable, the purpose of which was to prevent that immediate flow of air round the driver frame. So e cancellation still takes place, while the nature of sound wave propagation dictates that the larger the baffle the lower the frequency where cancellation is significant. The baffle can also be folded backwards, creating an open back box, however that itself tgen starts to have its own effect, more pronounced the deeper the sides relative to front size.

The low frequency roll off, significant unless the baffle is huge (impractical in most domestic situations), is combatted in some designs by having high power capable bass drivers and proportionately increasing amplifier power output as frequency goes down, or by using a separate subwoofer (not open baffle). The other key potential issue of open baffles is that the rear radiation reflects of the wall behind, far more significantly so the higher the frequency compared to an enclosed box. This means that to avoid both comb filtering and muddling of sound from the reflections of that rear sound radiation, the speakers need to be a very long way forward of the rear wall, or have the rear wall very well treated to absorb it. Against these disadvantages, open baffles have the distinct benefit of no inherent resonant frequency(ies) as boxes have, and no internal compression as particularly problematic in smaller sealed boxes causing non-linearity of cone excursion and hence power distortion in sealed boxes.

Which design is better is something that can only be assessed by hearing - and given the rear radiation it is far more important than most speakers that the assessment is done in a one’s own room or otherwise in one of similar dimensions and with similar acoustic properties to the wall behind the speakers.

Hi FR, I am tempted, could you gauge the production quality for me please

I posted this back in March on a thread titled “What’s inside” … the only piece of data missing from my post that’s relevant is that they’re positioned about 4 feet from the back wall and about 11feet from the listening chairs … and I think, but am not 100% sure, that they are available world wide … shipped to your door. Some assembly required.

Show us what's inside Hi-Fi Corner

We moved just a week ago and I’m tired of emptying boxes so I thought I’d post something here. Noticing an almost complete absence of speakers on this thread I thought I would add mine and talk about them a little bit. Excuse the mess. PureAudioLogic Trio 15 Classic: [IMG_1735] An open baffle speaker with 3 drivers … 2 X 15" woofers and a Voxativ AC-PiFe full range driver Front screen off: [IMG_1736-1] Solid oak frame … each speaker weighs around 60lbs … the grills are magnetically att…

Frequency response 29Hz - 20KHz … 96db … fast crisp bass and a luscious mid range. No brightness or sharpness at all at the top.

It’s fair to say the speaker excels at all the genres of music I listen to but it goes above and beyond with male/female voices and acoustic, especially stringed, instruments. You are acutely aware of fingers being placed on strings before they are actually plucked or strummed. Cellos are rich and creamy …

My go to track when demoing a new piece of equipment is the first track on John Martyn’s “Church with one Bell” album … “He’s Got all The Whiskey” … the first time I played it through these speakers I came near well close to having a bad case of the moist eye … hugely emotional.

One thing to bear in mind is that the speakers currently on sale have different woofers than I do and they are using a different crossover. They are continuously improving on the product … I only add this tidbit in the interests of full disclosure …

Lastly, it’s a small operation; when you email the info@ email address more than likely you will get a response from the President of the company … Ze’ev Schlik … who is also founder and creative force behind the line of products … very knowledgeable and extremely helpful.

Enjoy Peter
PS. Last time I heard a pair of open baffle speakers was back in the mid 80s in a hifi outlet in Copenhagen. They were an American make called Mirage driven by Mark Levison. Time flies….