Hi there, I’m just dipping my toes into the world of streaming services and I’d like some advice on how to optimise the sound quality of my setup (Mac Mini running Apple Music, connected to an Audiolab M-DAC Plus via USB A to USB B cable). Amps are NAC 72 and NAP 90, with early 90s Monitor Audio bookshelf speakers.

I’m finding the sound to be a little harsh at decent volumes, to the extent that I am forced to turn the volume down - never a good sign! This harshness is not present when I play CDs on my Audiolab transport (connected to the same Audiolab DAC via audiophile coax cable).

Which of the following will improve the sound…

Also, is a wired setup preferable to using Airplay (in terms of sound quality)?

If I may, my skepticism about differences in digital transports is well known around here

and don’t believe me, but if you haven’t done so yet, I would suggest that - before spending serious money - try ruling out differences in the masters and try making sure that you are comparing the streaming and CD like-for-like. The same music is easy, the same masters often not so much - I tend to think that a reasonable way is smaller artists where an album was really released only once, without reissues, and there is a better chance that the one that went online and the one that went to the CD pressing plant were the same thing.

If the difference is still there - and certainly it’s not impossible with a direct USB connection - all of the things you listed are possible, but try the first 2 ones cheaply first. A long ethernet cable is cheap, so maybe you can throw one on the floor and try, before a proper installation. An expensive USB cable can maybe be borrowed from a dealer (or you may have 14 days return right, e.g., if you are in the EU and buy online).

Same goes for a dedicated streamer. Many options in this direction, how much do you want to spend? There’s also the question whether you want just a streamer transport and keep using the Audiolab DAC, or want an integrated streamer/DAC like Naim’s ND5XS2.

Generally, additional isolation is probably preferable, so maybe rather something based on ethernet instead of USB.

Something else … let me think. If you are a bit handy with computers, you could try setting up a Raspberry Pi with some software. There are then many options, from running Roon on the Mac Mini and streaming to the Pi to something based on UPnP.
You could also try picking up a Naim DAC (quite good prices 2nd hand) that supports USB (I always forget which ones they are) and see how that works instead of the Audiolab.

As for the speakers, I owned MA Gold GX200 and am on the record here about how much I loved those, and how they grew from my old Rotel system to the current one - despite there generally not being that much love for MA on the forum

The MA with dome tweeters n particular are typically said to be a bit on the harsh side. Mine had the ribbon tweeters, but even so I found out that all of the harshness that was bothering me went away with a speaker upgrade (a considerable one)

Also, is a wired setup preferable to using Airplay (in terms of sound quality)?

Go Wired, Wired, Wired if you set up a system.
Just read the many forum posts of the connection problems of users who use wi-fi because they haven’t, won’t or can’t use a wired connection. Is that where you want to be?

As I suspected, will do, thanks!

While true that wired is much less headache, connection problems are a different problem from SQ

I hadn’t even considered whether the masters are the same, good point (although I’m not entirely sure how I work out which masters were used). You made several good suggestions, thanks. As you say, try the cheap options first, it might do the trick.

My speakers are MA 201 (2-way bookshelf), which probably means nothing to anyone here - they are great! I’m with you on Sonic Youth, too - great band.

(although I’m not entirely sure how I work out which masters were used).

That’s why I meant, with Dark Side of the Moon, or what have you, it’s more difficult to say whether your particular CD press is really the same as one of the 10 reissues on the streaming service, compared with a small artist where an album was released only once on CD and online, and was never a big hit that had represses or reissues. But it’s always not 100% sure. If the harshness problem exists with all albums, I suppose it’s probably a good hint that it’s a real difference.

and good luck in your quest, keep us posted

While true that wired is much less headache, connection problems are a different problem from SQ

There are lots of users on wi-fi who have no SQ issue because they have no sound i.e. it does not work.
Never noticed any SQ issues on wired network. I think it would be the other way around and wi-fi which has potential sound issues.

I’m just saying that the OP is trying to solve an SQ problem and didn’t mention a connection or dropout problem. Though yeah, sure, I agree that if running ethernet is a reasonable option, it’s certainly preferable regarding reliability and lack of headaches. SQ, who knows, best to try both if one is so inclined. Different hardware may well react differently to either option.

Funny you should mention dropouts - I do get those if I connect an iPhone or iPad to the Audiolab DAC via Lightning to USB A cable. Switching to the Mac Mini has fixed that problem.

I’d really be interested to know how you feel the PT Too sounds versus streaming. That was an exceptionally good turntable at the time!

Apple Music (and Amazon HD) is incredibly annoying as without an external DAC (which you have) it is tricky to stream without a physical connection to Naim’s streamers. Airplay 2 is CD quality still (it’s pretty good though).

Check the Apple Music Preferences they probably should be: 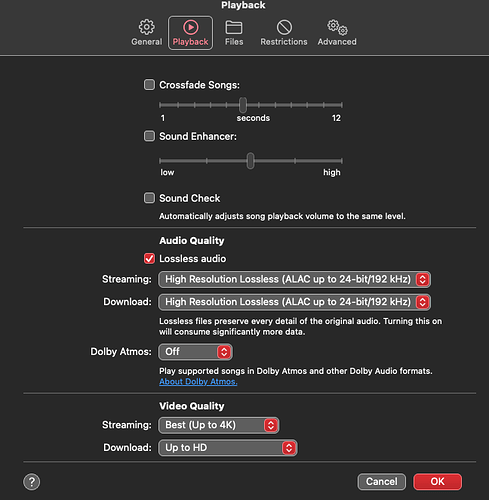 I have some older Mac Minis which could run ‘headless’ into a DAC but they are too old to support Apple Music in hi-res/lossless.

I’d consider a Qobuz or Tidal trial and would also take a punt on Audirvana Studio demo with those services to see if the hi-res from Qobuz and 1st MQA ufold from tidal are any better than Apple Music.

Many use Roon but I think its appeal is not down to sound quality.

As for the early 90’s kit, the NAC 72 is great I have one from around 1992 and it’s just started to be flakey, needs a service though I can’t justify that currently with a newer NAC 282 I got ex-dem a few years ago - must say when I did compare I’m not sure I didn’t prefer the NAC 72!

As for servicing, if not done consider that for the NAP 90 - Naim’s prices are not as keen as they used to be - contact Darran at Class A, Sheffield (authorised by Naim) to compare service costs.

Might well be wi-fi issues causing dropouts but I doubt that would affect overall sound quality.

That said wherever possible (though in some instances wi-fi can avoid noise introduced by direct connections to dedicated streamers), I’d always favour an ethernet network connection in terms of stability. As wi-fi improves the gap lessens but a direct ethernet connection is always going to be more robust. Whether that significantly affects SQ is another matter.

Sorry, no idea about that one, but as Alley_Cat says it might simply be the iPhone wifi

Cheers, I am constantly amazed at how detailed the answers are on this forum - thank you all.

I have already installed Audirvana Studio on the Mac Mini. I like the UI but it’s not much use because I have to use it in “legacy mode” with Apple Music, which means the various checkboxes to de-prioritise other processes on the Mac are not available.

The PT TOO sounds great to my ears, despite my local dealer telling me a Rega Planar 3 would sound better. It’s fitted with a Roksan Tabriz tonearm and Roksan Corus Black cartridge, as it was in the early 90s (for various reasons, it has not been used for long periods). It sounds far more musical than my CD player.

The 90 is from the early 90s and has been serviced recently, very recently I bought a 72/140 as well. Now I just need to track down one of those hard-to-find olive shoebox Hicaps!

A college pal once asked me to look after his early Pink Triangle and accompanying hi-fi over the summer break, and despite knowing it was good in his ‘digs’ it was only when I had it to myself for a couple of months that I knew what a step up it was from my Sony/Yamaha system.

The bug was born!

A close friend got an ex-demo PT Too, and it just sounded so right.

Many years later I got a PT Anniversary secondhand but it currently has some issues so I’ve gone back to enjoying my LP12 but have to say the cost of new vinyl is crippling.

Another issue with Apple Music as I hinted at earlier is that there is no way to simply integrate it with Audirvana/Roon/Naim streamers etc etc as Apple despite touting hi-res lossless have no clear methods to output this apart from using an external DAC driven by recent Mac hardware.

It’s a bit of a joke really, but I do think CD quality Airplay 2 (and original Airplay) sounds good.

Just want to add that if you want to rule out the network, you should try playing downloaded music from your Mac Mini.

From a technical standpoint presumably yes.

From a practical viewpoint I’d love to think so, or at least for older material released on CD I’d hope perhaps many masters were at a better quality.

Maybe my age/hearing prowess but I can think of very few hi-res streams/purchases from Qobuz that sound significantly better than CD but their pricing was so keen for hi-res purchases that it made little sense a few years ago to buy lossless CD quality downloads if the hi-res lossless might be better for marginally more - a brilliant pricing model I’d suggest to encourage streaming subscribers to purchase as well with a 30% or more discount for hi-res with Sublime, really made no sense to buy only CD quality as that option was available for download with a hi-res purchase anyway )though how you determine provenance is beyond me).

Another excellent suggestion, will do.