I have just been reading the news/hype about the forthcoming Sign O The Times Super Deluxe Reissues.
I only have Prince on CD and would like to get some titles on vinyl. 1999, Purple Rain, Sign O The Times
SOTT isn’t out until September but with my appetite wetted I notice that last years remastered vinyl reissue of 1999 is still available. Does anyone here have a copy, how does it sound? Better or worse than an original pressing etc?
I’m mostly interested in the standard issue albums I’m not such a completist to want all the extras.
Any other suggestions for Prince vinyl also appreciated
Cheers

Having searched the SHF it appears that Prince albums were reissued and mastered by either Kevin Gray or Bernie Grundman in 2011 and 2016 are still available less expensive. So, if I’m not bothered about all the vault material maybe these are the way to go? (Excepting used original pressings)

I’m presently eying the 2011 remaster of 1999 vs the current 2019 remaster. Just the standard 2LP editions.
The shop has both brand new at the same price, anyone care to chip in as to which is better?
Thanks

Yes I know, as I said I’m not looking at all the extra vault material just the standard 2LP reissue/remasters in the absence of finding clean used copies

The original was always a rather good sounding issue, I thought.

Thanks Richard, looking on Discogs originals are escalating in price, any thoughts on these later remasters?

Dread, I have a nice minty original so I haven’t bothered with any of the reissues, so I couldn’t say how good (or not) they are.

Yes of course, I’m looking at used copies, theres lots of variables, EU vs US pressings and various different pressing plants used on US pressings, maybe just have to take a punt

I just looked at my copy - it’s a 1st UK/Europe issue with the big heart shaped sticker on the front as well as the extra smaller peach coloured rectangular hype sticker. The vinyl looks like it’s RS Alsdorf pressed (so usually immaculate) using metalwork from the US Allied cut - best of both worlds.

@Richard.Dane…how can you tell all that? Just looked at mine and i bought it when it first came out but does not have any stickers on it.

I looked at the dead wax on each LP. Cross reference against info on Discogs.

Thanks to Dread I’m giving this LP a spin now - it’s been a while but still a great album and sounds really great. 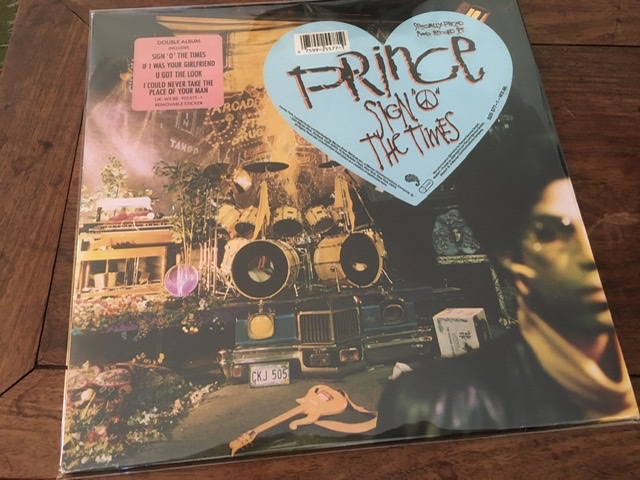 So were the stickers on the cellophane wrapper?

Dead wax on each LP?

No stickers are on the sleeve. Dead wax is Allied etched with RS Alsdorf stamps.

OK Thanks…I’ll take a look but no stickers on my copy…
@Richard.Dane

@Richard.Dane…So FWIW my copy is alos a 1st UK/Europe issue with Alsdorf pressing on the disc…

Thanks Richard…its amazing what you learn on this site…that Discogs site is very useful it seems! Thanks you!

Generally speaking most Prince records, from what I’ve been researching ought to sound reasonably good (notwithstanding Princes production values) as Bernie Grundman mastered the originals and most of the reissues.
Over on SHF I note commentators say that the later Grundman masterings have a bit more bass and on the 2019 1999 tamer or duller treble depending on ones viewpoint, system, hearing
So perhaps not neccesarily better or worse just subjectively different

I have pre ordered Sign, but only the 2 LP set

on other remasters, most of what I would regard as my some of the finest

So Peter Gabriel - 45rpm from Society of sound (B&W) outstanding
Pink Floyd Pulse = 4 LP live - off the scale, prob one of the finest live albums ever
Give Up but don’t give in Primal Scream
David Bowie Live at Glastonberry 2000
Road Houses & Automibles - Chris Jones 45 RPM
Genesis remastered 180
anything from Abbey road is of a very high quality

Having done a bit more searching on Analogue Planet and cross referenced with Discogs, Michael Fremer reports that the 2019 remaster of 1999 is from 24/192 files by Bernie Grundman. So I think probably fair to assume that the forthcoming SOTT will be likewise.

The 2011 remaster by Bernie Grundman is “Mastered from original tapes” so perhaps more likely to be analogue although that’s no guarantee.

Decided to get the 2011 remaster. Sounds great!