Problems with MuSo after firmware 2.0.0 Update

I have recently updated my MuSo to firmware 2.0.0 and updated the iOS App to the latest version.

The update completed without problems although it took several attempts to sign into Tidal afterwards.

Since the update, I am unable to play any tracks from a Tidal playlist - after pressing play the symbol changes from play to pause for a few seconds before changing back to play without having played anything.

If I first play something from, say, Classic FM, I can then play a track from a Tidal playlist, but it stops after playing one track.

No matter how many times I try, I can only play one track from Tidal at a time.

Any ideas on troubleshooting steps?

I would suggest a power cycle of your Mu-so - unplug and leave for at least 15 minutes before reconnecting.

During that downtime, i’d also suggest the following: fully power down your iPhone/iPad and back up, and restart your router, too.

I did as you suggested - the first part of the issue remains in that I cannot go directly to a Tidal play list and play anything, I first have to got to iRadio, play something and then go to Tidal.

The second part of the issue is resolved, once Tidal starts to work, I can play more than one track without it stopping.

I also need to update the firmware on my ND5 XS, but I guess I should wait until this is resolved?

One question: are there multiple users of TIDAL, with different accounts, using the Naim App?

Thanks - we have seen some issues where multiple TIDAL users in a household can cause issues: it’s something we’re looking into for the next App release.

I’m looping you in with @tomvamos as he and the team are working on an App update around these issues, so maybe you could be a beta test

I’ll be in a different country to the MuSo for the next two months, so I’m afraid I won’t be able to help with the beta testing.

Does the ND5 XS have the same firmware update problems with Tidal or is it OK to go ahead with that?

It can have the same issue, but not for long - the App update that fixes it is being released today. I’d wait to update your App, and then progress.

We have issued a minor patch release – version 5.22.2 - of the iOS App this morning, which should be available in the Apple App Store shortly. It includes fixes for these reported issues: • Irregular Volume button placement on Now Playing/bottom bar • Occasional TIDAL playback issues triggered by mixing multiple accounts/power cycling legacy systems Please note there is not an equivalent Android release, as these fixes are iOS-specific.

After trying for ages to update my ND5 XS using the same windows laptop that had worked on several previous occasions, I tried an ancient Mac and the update worked first time…

So far Tidal is working as usual. 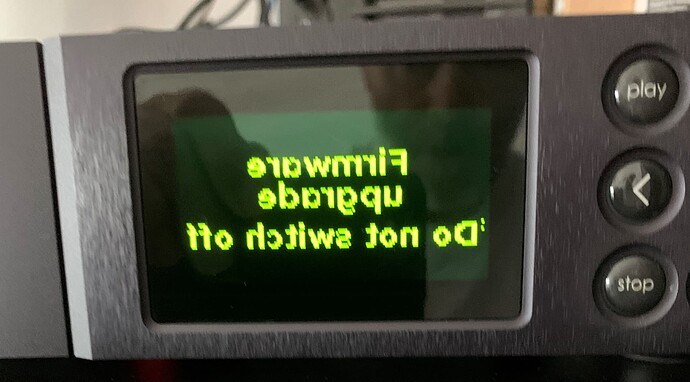 That’s just something that happens during the update if you’re using a more recent display design. Nothing to worry about - things return from mirror-land after the update