Each time I switch away to another app on my iPad, the Naim app comes up with the Rooms screen when returning to it. It successfully identifies my one and only room, but will not reconnect to it.
I understand that it’s only one additional step, but if, for example, you want to build a playlist from one posted online, it adds many needless steps to the process.
It’s an ND5-XS. My iPad has the latest version of iOS and the Naim app is at version 5.19.4 - which as far as I know is the latest.
It’s been happening for some time now, and is increasingly frustrating to have to live with. 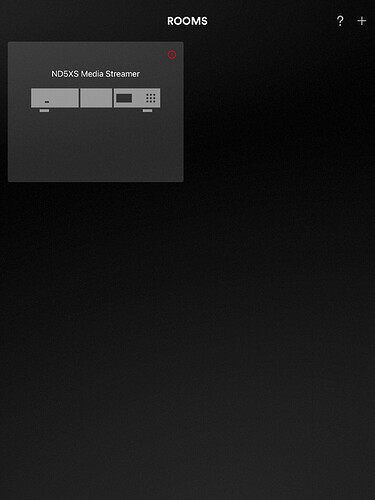 I have the same problem with my NDX, it’s been going on for quite a while.
I’m a beta tester & have it logged, I’ve sent screen shots, video & other stuff including one on one phone calls, it’s been concluded that it’s “an Apple thing”.

I get something similar too. I don’t think it loses the connection as such (in my case) but it does go back to the rooms screen. I just have to select the room and continue. I get the impression this only happens on my iPad but not my iPhone. I need to have longer sessions when I try to stick to my phone to test this theory.

On my iPhone opening the app always opens up wherever it last left off, complete with the play queue and artwork of the last played track, even if this was several days ago.
However, this is just a trick. The screen is unresponsive, and after a few seconds it jumps back to the rooms screen, and the streamer wakes up when I select one.
This may or may not be ‘an Apple thing’ but it’s a long standing thing, and the Naim app is the only app that behaves this badly.

This problem is very specific Chris, it always gives the ‘ROOMS’ screen as shown by the OP

it’s been concluded that it’s “an Apple thing”.

I have it on Android as well, I considered it silly (with one room too!) but expected. The “stay connected” setting seems to make it quicker (though not disappear completely), but when I enable “stay connected”, then seemingly randomly (but not always) the app display will never go to sleep, and when I forget it, the tablet battery drains in a day

Interesting that you have it with Android Suedkiez, can you post a screen shot please. (I’ve tagged this thread to Naim beta peeps so they can read reports)
I don’t accept its an Apple thing BTW, but if Naim think it is, what’s to do??
Problem is its not a widespread problem, at one time I was the only beta tester reporting it.

Interesting that you have it with Android Suedkiez, can you post a screen shot please

Actually I have to correct myself, for me it is not “every time” as the OP said. But it is often that I land at the rooms screen and have to click the room, then wait. Of course not now …

Though in my case there is the other thing that my app is always unresponsive on wake-up, which was traced to having 2500 Qobuz favorites in the beta investigation. So now I am logged out of Qobuz in the app to work around this (as I use Roon, and the app is only for volume and radio).

Maybe there is a connection somewhere. I’ll later log in and try to reproduce it. Will post my findings

Edit: I missed the red exclamation mark! I don’t have that either

Do you get an error message if you tap on the red exclamation mark?

If I tap the red exclamation mark, it asks if I’m sure I want to remove the room.

That behaviour would seem reasonable if this was over a few days. In my case this happens while the streamer is playing an album - it’s not like the streamer has gone into standby or anything (and mine is set to not go into standby).

Funny, this used to happen to me all of the time when I had my NDX (one room as well). Not every time, but more often than not. iPad or iPhone—didn’t matter. It also occurred every time if my iOS device left the room for a period, like if I had to take my phone somewhere or my youngest took the iPad out of the room without me knowing.
When I got an ND5 XS2, either of these scenarios no longer has been an issue, and I mean at all. I never chalked it up to ‘an Apple thing’. Rather, I looked at it as ‘an NDX thing’. The more threads I’ve read over time regarding the legacy streamers, the more convinced I am of their quirks, such as one like this.

Unfortunately it’s not just after a few days. It’s every time, without fail, whenever the app has been closed for more than a couple of minutes.

Hmmm, clearly an inappropriate response to your attempt to use the app! I would get straight onto Naim support and ask them to investigate.

Im trying to recreate this issue, with ndx2 and uq2, but it’s working perfectly. Are you just swapping from one app to the naim app and the naim app is lost back to rooms?

I don’t recall anyone with new platform units having this ROOMS screen issue Robert
The only ROOMS screen events reported in beta testing, & thats going back some 3 or so years was NDX (me) NDS & ND5.
But fingers crossed, the latest iOS beta seems to have done something, I loaded the new one this pm & as yet the screen pop up hasn’t happened.

I guess uq2 is old old platform. I suppose thats the challenge, one app, many different components to control.

I think it’s usually when switching to another app and doing something in it, such as entering text, scrolling or something, then switching back to the Naim app.
I’ve recently discovered that it’s not absolutely every time I switch back, but it does happen annoyingly regularly.
From reading others’ posts, it may be confined to those with earlier ‘legacy’ streamers.

Same here. Only bought an iPad because the IOS Naim app supports a link to the Rovi database whereas the Android version does not. It never ran flawless on the iPad. Slow,closing unexpectedly,hangs sometimes,you name it. Both with my NDX and after I upgraded with my NDS. No idea whether it is an Apple thing or it is the app but the Naim app on my Android phone works absolutely flawless. So will dump iPad soon and get me a decent Android tablet.