I have an old pair of Linn Index mark 1 speakers but they are quite a difficult speaker to drive and don’t really suit the Nait 2.

Anybody got some recommendations for a good (tried and tested) speaker match for a Nait 2 ???

Guru Juniors or Q10s. The Nait is not going to play LOUD and these work really well at low/mid volume. They really boogie well with the little amp.

See anyone not upgrading? thread for photos.

Apart from Kans, If you can find them…

Royd - Stand mounts such as the Sapphire or Merlin or the little Minstrel floorstanders.

Royd Minstrels are great on a NAIT. Even SL2s work really nicely so long as you use a top source and don’t push the NAIT too hard.

Allaes are stunning on the end of a Nait 2.

Naim nSats also good match, they sing with the nait - if you can find a pair

Indeed. This is the combination I use in the bedroom system.

Hi Richard, maybe you could answer a question about the forum.

Sometimes I post a reply to somebody but the reply doesn’t include a response to them directly even though it shows them as the recipient when I press reply.

In simpler terms I press the reply option on there comment and it shows them as the recipient when I type out my reply but when I press reply to post my comment I fails to have any recipient shown on my reply.

The attached pic is a perfect example as both comments were sent to you but only one shows you as the recipient.

If that makes sense. 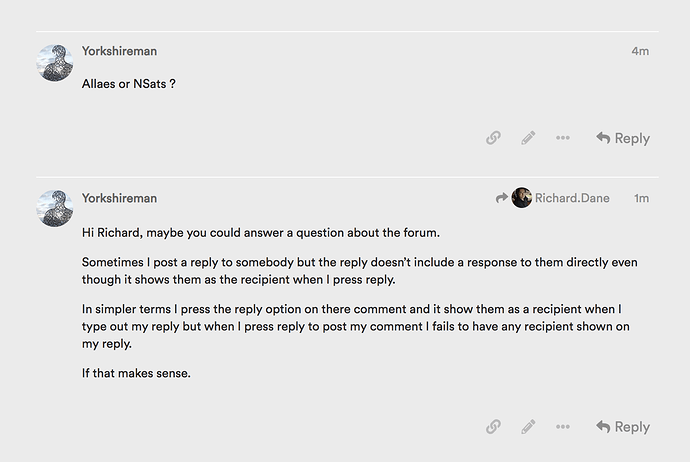 I can second the Kudos X2. In the right room they are magic.

Right now I am using Trenner & Friedl Suns with my Nait 2 as a desktop system. They are superb. Pricey, but the best I have used with the Nait. I had both the Suns and the Harbeth P(the latest before the switch to the newest version) for about three months last year and while I have always loved the Harbeths, the Suns were what I kept.

If your post comes straight after mine it’s assumed that it’s just a linear response to the preceding post.

The little avatar that appears in the top right hand corner of a reply only appears when you respond to a post that’s further back in the thread than the immediate preceding one. Then if you click on the avatar it shows you the post that you’re responding to. As demonstrated by this post in response to you.

The Sun are 82db, can the nait2 drive them well?

The Harbeths also require a fair amount of power to get the best out of them.

I usually listen at low levels, but I have had no problem driving the Suns with the Nait 2.

I tried a dozen or more with my Nait 1. Favourites are Kans, ELAs and, depending upon the room and if you need a fuller sound, then Linn Keilidhs. SBLs sounded superb but haven’t had a chance to listen much further.

I think if you’re into heavy rock then its the wrong amp unless you can find some VERY high efficiency speakers.

Not heard the Gurus but would like to. Not heard n-sat, alaes, or x2 either.

Another plug for Trenner & Friedl - I’m currently using their “Dizzy” model (discontinued) with
my Nait 2…superb!

If you want a bookshelf model, I’ve listened to the “Sun” with a variety of low-powered tube amps and they sounded wonderful. Well worth investigating the T&F line if you’re not familiar.

Good luck with your search!

I second the recommendation for Allaes. I have also had good success with Neat Petites, Tab 10s and Rega RX1, in that order.